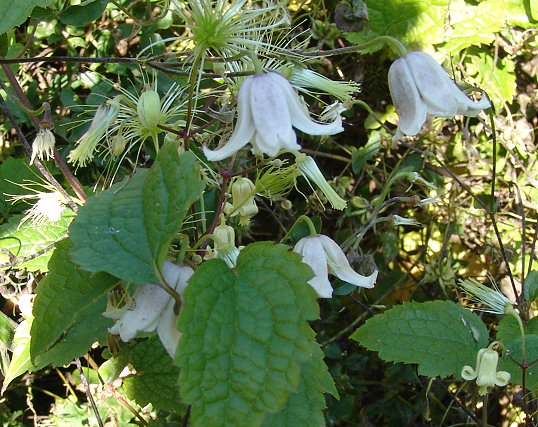 Clematis of the Month for June 2006

Section Hybrid.
Subsection The International Clematis Register list the mother plant as C. viorna, but the pollen plant as unknown, it is likely a seedling from open pollination.
Distribution Bred by E. Pranno (1982) and named after his Village.
Flowering July to September, but in our garden often June to November.
Habitat A hybrid from Kaiu, Estonia which has proved to be very vigorous and hardy in England.
First Recorded Published reference in "The Clematis 1996".
Distinguishing Features Vigorous growth and long flowering period are this plants main features The small (25mm) campanulate nodding white flowers, with a blue to pink tinge are produced in profusion through most of the summer months.

This plant was first seen by us in the summer of 1998 on an International Clematis Society visit to Sweden and Estonia in Eerich Prano's garden in Kaiu, Estonia. A bare rooted cutting was brought back and grown on. It quickly became evident that the plant was happy in our English climate, putting on lots of top and root growth which meant that it required potting on twice in that year. The plant was big enough to plant out in our garden by the spring of 1999. Hoping that it would precede the flowering period of C. connata and help hide our Garrya elliptica "James Roof" in Summer. The first summer it proved to be very refined in its habit, only growing to 2 metres and only flowering through July and August. After its initial year of planting it has proved to be a very pretty and vigorous plant, by far exceeding its stated growth of 1.5 to 3 metres in height, by another 2 metres and spending most of the summer months in flower.

I have heard that in some gardens this plant does not flower profusely and does not grow very big, but in our very alkaline dry soil it flowers all summer, making up for the small size of its flowers, by producing many flowers over such a long period. 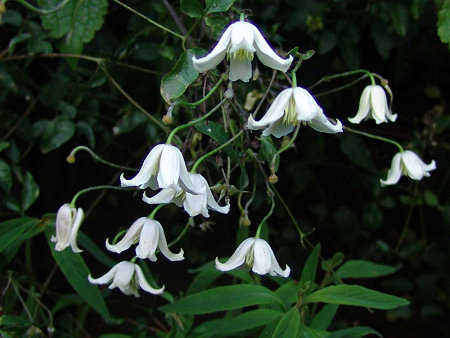 Pruning is easy as it can be tidied back to about 2 metres in November/ December and then cut down to 200 mm of ground level in March. At this time I mulch around the plant and spread a handful of bone meal. I then do not feed anymore, as I do not want this Clematis to take over the whole garden, also too much in the way of nutrients may cause more growth as a trade off for less flowers.

Most people who visit the garden admire this plant and ask where they can get it from.