Clematis of the Month for March 2014 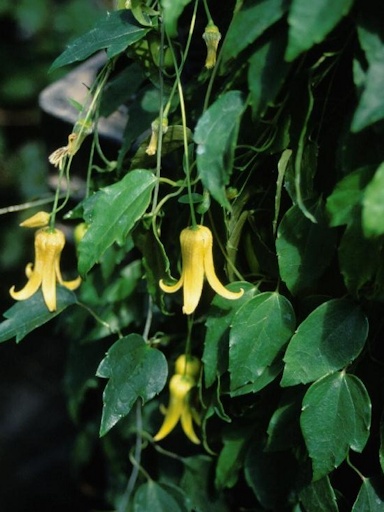 This month we feature a rather unusual clematis which I first heard of in 2000 and the speculation, at that time, that it could be an epiphyte clematis.

Brewster Rogerson, the learned American Clematis expert, who has written many of the Clematis of the Month articles for this site, presented a paper at the Society's Conference in Dresden in 2000 about how he went about studying a new clematis, as yet unnamed, from China.

Brewster had a large collection of clematis plants (which are now part of the Rogerson Clematis Collection) and had received seedlings from two different sources three thousand miles apart. 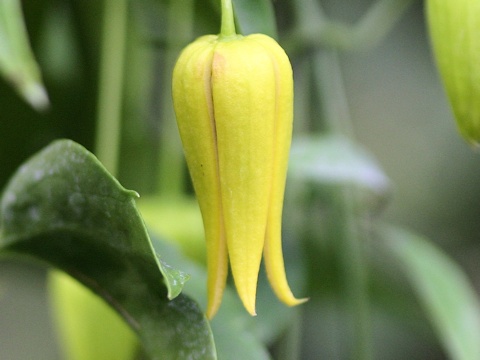 Over two years of growing these seedlings Brewster noticed that two of the plants (one from each source) that he had received were growing in a prostrate manner with graceful yellow bells on very long, drooping stalks (pedicuncles) and bright green foliage. Initially the plants were not too similar to be obviously the same plant as one plant was a year older than the other but as the younger plant matured it became more similar to the older plant in its growth.

The first thing that Brewster noticed was the plants procumbent habit; he notes that "apart from the very newest Spring shoots, their stems do not even try to grow upright" and that "they grow along the ground without forming roots". Most clematis grow upright in that they either climb by clinging to something to pull them up or they start by growing erect before they get too heavy and then scramble happily along the ground. There are some other low growing clematis but their flowers turn up as they bloom (e.g. as does C. × cartmanii 'Joe'. However, this plant had flowers that hung down which was new in the clematis world.

Brewster was able to identify, after some research, that the two seedlings were from the same batch of seed collected by Dan Hinkley in 1996 in the region of Sichuan in China known as Emei Shan from a single plant that he found.

I mentioned above that the plant was first thought to be an epiphyte; a plant that grows on another. This was because when it was initially found it was observed as "growing as an epiphyte on a small tree in damp shade". However, the plants were growing in Brewster's greenhouse in pots of compost and growing well.

Brewster observed that the number of stems growing tangled round each other and wondered if this behaviour had contributed towards the initial speculation that the plant was an epiphyte. He enquired again and concluded that the tree where the parent plant was found had moss and perhaps other debris collected over time in the place in the tree where the plant's roots were growing. So unfortunately for science the plant is not an epiphyte.

However, this is good for us gardeners as we are able to grow it in our gardens and expand the ways in which we grow clematis. Brewster commented in 2000 that perhaps it could be grown in a hanging basket and this challenge has been taken up. 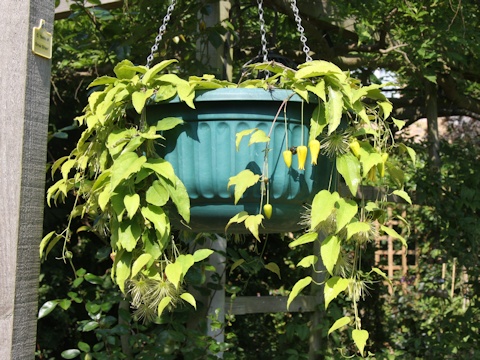 Spurred on by seeing a picture of Everett's plant I eventually bought a plant (now known as C. 'Bells of Emei Shan') and tried to grow it myself in a hanging basket. This has been quite successful as you can see. This plant was potted in 2011 and this picture was taken in 2013. The number of stems hanging down is increasing every year. I am pinching out the growing tips to encourage them to bush out to cover and hide my plastic pot. I opted for a plastic hanging basket in order to have a water reservoir available to the plant in the summer as I am not around to water it every day.

When Everett sent me his photographs shown here he made a comment that "I have found that they like being kept slightly on the dry side when over wintering" so (this winter being the wettest since records began) we have been regularly emptying water out of my hanging basket's water reservoir.

Another tip is that moss may grow on the top of your hanging basket and if it does you should leave it as this is how the plant grows in the wild. This suggestion was too late for me last year as I had carefully removed the moss and top dressed the pot with gravel.

A final note is that in the process of writing this article I read Brewster's original article again and realized that he made the comment that the plants in his greenhouse like to grow in shade or at least the flowers prefer to bloom on the shady side of the plant. My plant is positioned in full sun so I am now thinking that I should move it this year to a position where it gets some shade in the summer and see if the plant responds. I look forwards to my plant one day reaching as far down to the ground as Everett's does!

My thanks to Everett Leeds for the use of his pictures in this article.

My thanks to Everett Leeds for the use of his photos, which make up the majority of images on this page.
Return to top of page