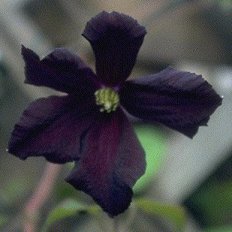 Clematis of the Month for July 1998

Editors note:- Clematis 'Romantika' was first published on this site in July 1998, shortly after we received the sad news of the death of Uno Kivistik. It is one and arguably the best of the many hybrids for which he will be remembered throughout the world.

It usually takes only one look at 'Romantika' for clematis gardeners to know that this is one they must have. But it has only recently become available to gardeners outside the former Soviet Union, and may still be hard to find in some parts of the clematis world. One of the many outstanding hybrids created by the Estonian breeder Uno Kivistik, it is chosen as Clematis of the Month not only for its own merits, but for its relation to a man whom we desire to honor, and we should speak first of this. When the Iron Curtain was lifted in 1989, botanists, horticulturists, and plantlovers of the Western (and Far Eastern) nations were suddenly in contact with the work of a whole generation of plant breeders in Russia and the Baltic nations they had formerly known only rather dimly by report. It was a little overwhelming at first, and even now the lines of communication and supply are still in a formative stage. Some prominent breeders of clematis, for example, attend the international conferences of this Society as their readiest means of foregathering at intervals with colleagues who were formerly all but unreachable. At the same time most of the clematis faithful who joined in these conferences were getting perhaps their only opportunities to meet such figures as Uno Kivistik, who regularly came in recent years, and sometimes brought not only pictures of various hybrids but the plants themselves. His absence will be keenly felt this August at the annual meeting in Sweden, which at last report was scheduled to be followed by an excursion to Estonia and to his farm and garden.

Of the more than eighty clematis that issued from his nursery, 'Romantika' can fairly represent his best work, though in tribute to the variety and versatility of his hybridizing, two more are added. 'Valge Daam' and 'Romantika' are on the way to becoming more widely available. 'Teksa' is less well-known at present, but seems likely to follow.

Though classed as a Jackmanii, 'Romantika' (1983) immediately brings to mind the very dark-flowered viticellas such as 'Etoile Violette' and 'Royal Velours,' and in the garden it performs very much as they do. Introduced in 1983, it is a 2 - 2.5 metre vine (6' - 9') of moderately dense growth, well suited to host-plants with foliage light enough to set off the extraordinary depth of color in the flowers. These are of variable size, 3" - 4.5", with six or sometimes four or five tepals of a dusky reddish purple -- almost black at first, with a velvety sheen. Unnoticed at a distance is the track of deep red at the midribs, which is likely to become more visible as the margins fade. In some stretches of weather the whole blossom can turn a deep red. A mesmerizing flower. As with other Jackmanii, 'Romantika' profits from deep pruning at any convenient time during the cold months or very early Spring. 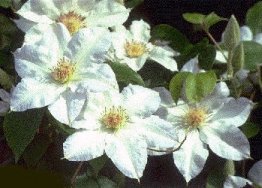 'Valge Daam' (1980) may be at present the best-known of the Kivistik hybrids outside Estonia. This compact plant, usually not more than 2 metres (6 feet) tall, has a beautifully presented 5" - 6" white blossom made up of six or seven broadly oval tepals, overlapping much of the way but often leaving a distinctive gap at the base. It has unusually long pointed tips -- sometimes much longer than those in the photograph -- that give a starlike appearance to what is essentially a rounded flower. Under close inspection it can be seen to have a very faint undertone of lavender, no doubt a sign of its inheritance from a Russian hybrid, 'Bal Tsvetov,' that few of us have ever seen. Opinions differ on the pruning, the Estonian advice being to trim back moderately after the summer bloom, whereas Western gardeners who have had the opportunity to try it tend to advise hard pruning. (The name, by the way, means "White Lady".) 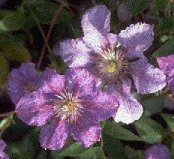 And then there is 'Teksa' (1981). The mottling shown in the photograph is no illusion. The 4" - 5" flower is overspread with a pebble grain of lavender-blue and white, with a faint streak of pink at the midribs that sometimes floods out toward the margins. (This grainy texture is unusual in clematis, but has recently been produced in a couple of Japanese cultivars quite unrelated to 'Teksa.') The vine is of Jackmanii heritage but quite compact, seldom growing much beyond 2 metres. Pruning is the same as for 'Romantika.'

We will surely be seeing more of the many Kivistik hybrids hereafter. He leaves us a major legacy.