Clematis of the Month for September 2015 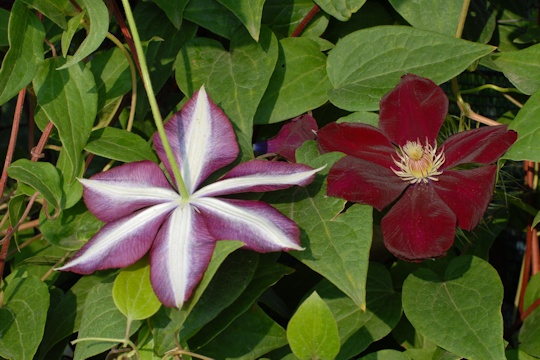 My thanks also to Szczepan Marczyński for the photo above, featuring both sides of the flower of C. 'Mazowsze'.

While the selection for this month's clematis of the month sells globally under two names, the name C. 'Mazowsze' is the one I shall use to describe this clematis and my experience with it. The name is a place designation that the clematis is named for, and is the region where breeder Szczepan Marczyński was born and still lives. 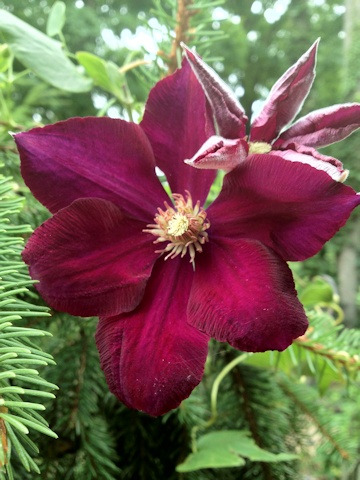 To name a clematis after your home infers a great honor and one that is probably not given without deliberation and care in the selection of a spectacular plant and flower to designate as such. My experience with this beautiful clematis substantiates this honor, and it is my pleasure this month to bring it to the reader's attention.

C. 'Mazowsze' was introduced to the market in Poland in August of 2006 and by October of the same year an agreement had been secured for C. 'Mazowsze' and two other clematis bred by Szczepan Marczyński for exclusive distribution in the USA.

By this time, I was purchasing clematis in the USA anywhere that a new variety was offered. Most of my purchasing was, and still is in the specialty channels, but new clematis were often offered under exclusives in the USA by the large mail order nurseries. In 2006, I ordered the plant from Spring Hill Nursery as soon as it was offered.

At this time in the clematis trade in the USA, the clematis plants offered from big mail order behemoths like Spring Hill were considered by many with disdain. This is because the plants are grown and shipped in small containers and as we all know, liners in the hands of the inexperienced who might plant them right into the garden have a high failure rate in many gardens.

The plant arrived the following spring, and as usual, the generous amount of the clean roots that held little medium when they were pried from the liner container was impressive and I could find no fault with my purchase. I am sure that I grew the plant on for a short while, but if memory serves, it was planted out that summer. 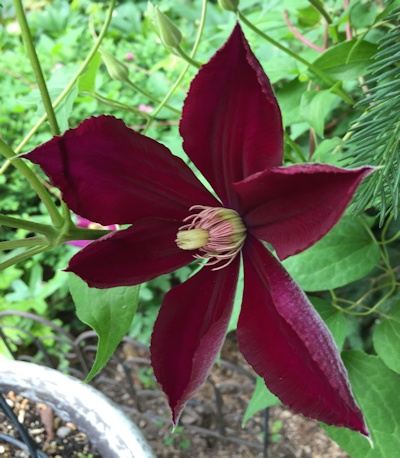 My records do not indicate how long I waited to see the first blooms, but the plant was not troublesome at all with any die back or "wilt" issues. See Note 1

The trade name was marketed in the USA as VOLCANO, and the eruption of the striking and contrasting boss against the flat plane of the flower, did indeed to me seem to be bursting upwards. The adjectives I would use to best describe the flowers and plant are substantial, striking and significant.

The word substantial really describes the plant. It is reliable and compact in my garden, with thick stems and simple dark green foliage. The foliage becomes leathery with age, but maintains its color and does not let a bug bite or two get in the way of growth or the visual impact in the garden.

The flowers are 15 - 20 cm in diameter and Mr. Marczyński has described the boss as follows. "In the center of 6 flatly spread sepals the purple-brown anthers on creamy- yellow filaments, arranged in a semi circle around plentiful creamy- coloured pistils." See Note 2

The flowers are striking because they burst open from upright buds, on a long pedicle, which presents them well. The flowers last a long time before deteriorating to a condition in obvious need of deadheading. The reverse of the gorgeous red flowers feature a large white central bar that is absolutely striking.

The flowering period is noted as June through August, blooming from one meter of height to the top of the plant. In my garden the blooms start in May. I tend to cut plants back in late July, and the remontant capability of the plant produces more flowers by September in a very satisfactory number. The flowers also do well when cut for flower arrangements.

Per Mr. Marczyński, "the claret-red colour of the flowers refers to the blood shed during many battles and risings that led to Poland's independence; it also brings to mind the royal purple ". See Note 2

The plant and flowers are also rather impervious to periods of extreme heat, which is of significant importance with changing climates and hotter temperatures experienced in many areas. The plant is hardy to zone 4, produces scant pollen, with persistent fruit.

One of the questions I recently queried Mr. Marczyński about was how he made the determination to designate the plant as a type 3 culture. The seed parent of C. 'Mazowsze' is the early large flowered C. 'William Kennett', which is best cultured as a type 2, blooming better on older vine. The plant is noted as pollen parent unknown, and it was verified that the plant was indeed resulting from open pollination.

Mr. Marczyński shared with me his belief that the best culture of any plant needs to be based on observations of growth and flowering, not assumptions from the seed parent. C. 'Mazowsze' was observed and grown for 9 years before being introduced to the market, and in that time he determined that the plant was the "showiest" (I interpret this as the most flowers) when pruned hard.

A light bulb went off for me at this comment. At some point along my 9 years of growing C. 'Mazowsze', I had made an assumption that C. 'Mazowsze' would best be handled as a type 2. I tried to retain vine every spring, yet the way that the plant bounces back after my July cuts, did show me perhaps what he had learned needed to be incorporated into my spring care of the plant. From now on I will hard prune 'Mazowsze' in the spring as well as in July.

The story of any clematis that includes the business side of the plant is more complete, and I was pleased that Mr. Marczyński shared with me that through the global distribution of the plant, 80,000 plants have been sold to date, with 25% of the sales in units coming from the USA. This is an impressive number of plants, especially for a clematis that has not perhaps received the publicity and recognition that it is worthy of.

C. 'Mazowsze' was awarded a silver medal at the Green is Life exhibition in Warsaw in 2006.

Note 1: The author recognizes "wilt as a catchall term caused by any number of garden variables vs. an actual fungal or bacterial wilt.
Note 2: Descriptions from the 25th Anniversary Catalogue of Clematis Źródło Dobrych Pnączy (Source of Good Climbers) sp.k., the nursery of Szczepan Marczyński.