Clematis of the Month for January 2016 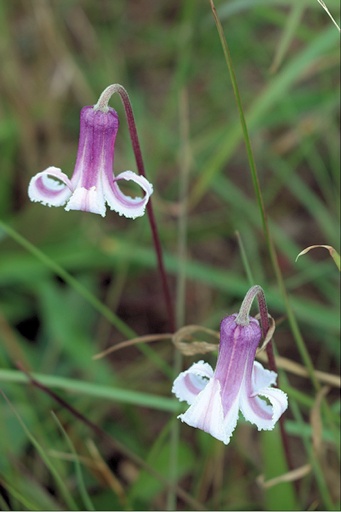 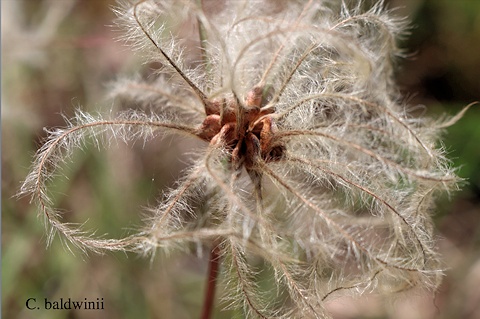 Clematis baldwinii is small erect non-vining herbaceous clematis which will do well in your mixed perennial border. It is endemic to the state of Florida, USA, growing throughout the large peninsula in sandy soil. C. baldwinii grows naturally in a variety of settings primarily in piney wood flatlands but also in disturbed sites. My first encounter seeing it in the wild, however was in an open, treeless flat field. It covered two acres with a variety of flower colors and a bountiful display of fluffy seed heads. A common name for C. baldwinii is pine hyacinth from its affinity for growing with pine trees and its resemblance to Hycinthus orientalis.

In 1838 American botanists John Torrey and Asa Gray described C. baldwinii in Flora of North America 1:8. They named this clematis for William Baldwin (1779 - 1819), an American physician and botanist whose herbarium collections were invaluable to Torrey and Gray. Since Linnaeus first described the Viorna section with C. viorna and C. crispa, the section has undergone numerous taxonomical treatments. This particular clematis has always been clearly a distinctive separate species. Ralph Erickson placed it in Clematis section Viorna, subsection Baldwinanae in his Taxonomy of Clematis Section Viorna. Magnus Johnson in his book THE GENUS CLEMATIS kept the same classification only adding the newly (1982) described Clematis socialis to the subsection Baldwinanae. 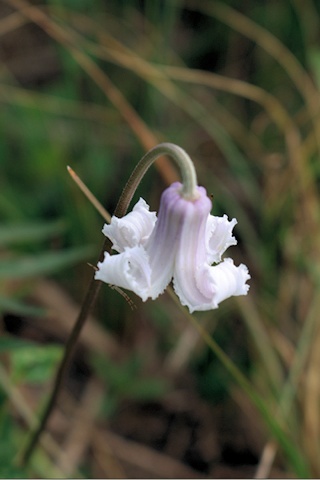 Clematis baldwinii is a very small clematis by clematis standards. It is a non-vining plant growing 12" to 24" tall trying to stay erect but will fall over and sprawl. An important characteristic is the flower blooming on a long stem held above the plant. This stem does not have any bracts. The flower itself is quite exquisite and supposedly slightly fragrant. When I encountered C. baldwinii in its native setting I was pleasantly surprised to find a palette of soft pinks, pale blues to darker rose purple with a striped effect. The flower itself is a nodding cylindrical-campanulate shape, being smooth on the outside of the linear sepals. There is also variation on the tips of the sepals from narrow recurved to more widely spreading becoming crispate or wavy. The inside of the flower is creamy. It is pollinated by a number of insects including bees, wasps, butterflies and sometimes a hummingbird. It is reported that the flowers bloom from January to April. They also seem to be responsive to the moisture level of the soil. During drought they will go dormant, emerging again to bloom after heavy rains. They also seem to follow a spring, fall blooming cycle. The plants in my garden reemerged in October for a fall flowering after being dormant all summer.

The stems are simple but may have some branching. They can be smooth or slightly hairy. The leaves are smooth with inconspicuous veins, coming in a number of shapes on the same plant. They may be linear or ovate and simple or deeply lobed with narrow lobes. Some leaf blades may be divided into 3 to 5 leaflets with a petiole. Leaf variation is the norm. 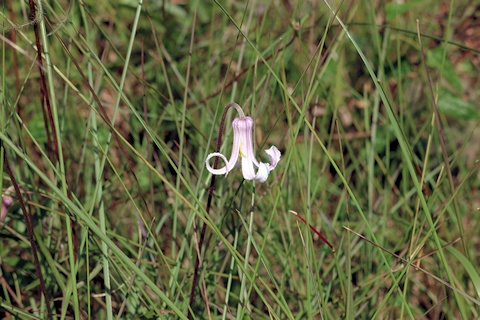 As with many clematis, the seed head is spectacular. It is the glorious fluffy seed heads glowing in the sunshine which was a beacon to my discovery of the field of C. baldwinii in Lee County, Florida. The stem holds the seed head almost erect. The achene is globose to ovate, mostly symmetrical, rimmed and long-pubescent. The fruit tails are an amazing 3" long, with silky pale yellow hairs that give its magical appearance and aids in wind dispersal.

Little is written about the roots of the viorna section. The roots of C. baldwinii have developed an evolutionary advantage. Their first lateral roots extend in sandy soil and develop about 3" below the surface of the ground, a distance similar to where the plant develops above the ground. This diminutive plant will develop an extensive root system which helps it to adapt to drought and to the frequent brush fires of piney flatwoods. It is also reported that the Seminole Indians would use a decoction of the roots to ease the symptoms of sunstroke. 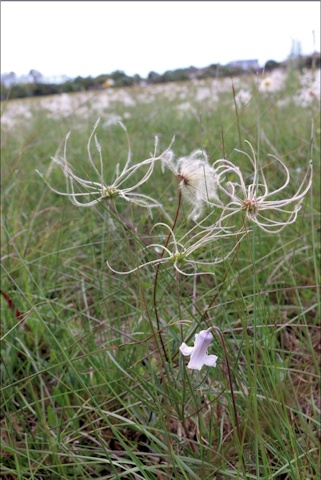 Though C. baldwinii evolved in the sandy soil of Florida, it will grow well in the ubiquitous moist but well drained garden soil. This site needs to be amended with a generous amount of organic material. Clematis baldwinii grows from zone 8a to 9b, though I have been able to find success in zone 7 of Atlanta, Georgia with the aid of some heavy mulching for winter protection. It flourishes best in understory areas with some shade from the afternoon sun. It will grow in direct sun but may struggle some though the population I observed was thriving. In mid-summer when it becomes ragged, prune it back and it will rebound. A late winter pruning is also recommended. Be aware that the young shoots are a favorite food staple of snails. The plants do not do well in containers and are not readily available for sale. To propagate from seed it is recommended that you soak the seeds (tails removed) for several days. Then peel the outer coat from the seed and sew the inner seed. I use moist blotter paper in small clear plastic boxes with fresh seeds germinating in a few weeks. A benefit of joining the International Clematis Society is the seed exchange which offers seeds of various species from around the world. 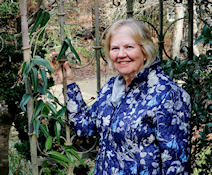