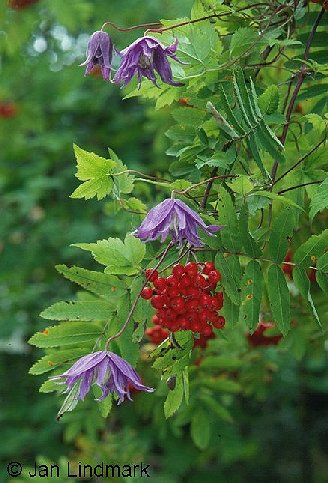 Clematis of the Month for March 2000

If we can escape a sudden cruel visitation from the Arctic blasting our flowerbuds, many of us who have had a milder than normal winter may be seeing clematis like this one blooming by the middle of this month. Ordinarily these Atragenes — plants like the alpinas, macropetalas, and their close relatives — come on a bit later, fitting in between C. armandii and the montanas, and overlapping somewhat with them both. C. 'Georg' is typical in that respect, but as we shall see, it has one characteristic that sets it apart from most of its peers.

C. 'Georg' is a seedling of C. macropetala, raised and selected in 1985 by Magnus Johnson, whose work we have enjoyed featuring before on the Clematis of the Month (see 'Jan Lindmark' and 'Columella'). Like other macropetalas, it has the double row of tepals that account for the "skirted" appearance, and a substantial inner ring of staminodes that marks its family connection to other Atragenes. Further inside, and often unnoticed by anyone who is not a botanist or a bumblebee, are the stamens, with (in this case) yellow anthers. It is possible to see all three of these -- the anthers just barely -- in the photograph kindly lent to us by Jan Lindmark. (It has previously appeared as a cover photograph for the Swedish gardening magazine Allt om Trädgård.)

Gardeners who know the Atragenes are aware that after their rich crop of flowers in the Spring, most of them have only brief scatterings of bloom later on. They continue to look good because their foliage is clean and durable and the seedheads are enduringly ornamental, but for a big show of late flowers one must look elsewhere. A few exceptions like C. alpina 'Pink Flamingo' that do have some repeat bloom are prized for it. And this is where C. 'Georg' outshines all the others. Writing the entry on C. 'Georg' in Släktet Klematis, Magnus Johnson quietly reported that it blooms mainly in April-May and abundantly through the summer. Jan Lindmark, invited to comment, is not so restrained. He calls it "the most reflowering Clematis I have ever seen." And as if to reinforce the point, when asked how far along in the year he took the photograph, he answered, "September." September? To go on: "In Magnus Johnson's garden it begins to flower by the end of May and it flowers all through the summer and to mid­October." He adds that the host plant here is a Sorbus aucuparia about 5m (just over 16 feet) tall, and the flowers shown are about 1.75m (nearly 6 feet) off the ground. (For the benefit of anyone who may be in doubt, the berries belong to the Sorbus. Too bad, but if they belonged to 'Georg' we might never have any puffy seedheads.)

C. 'Georg' was named in honor of a friend and fellow student, Georg Wettergren, who worked with Magnus Johnson at the nursery for all of sixty years.

For a brief comment on care of the Atragenes, please see the March 1998 CL of the Month on C. alpina.

(P.S. Thanks to Victoria Matthews, our Clematis Registrar, and Mr. Ralph Erickson for their expert help with so many details that some of them had to be left out.)