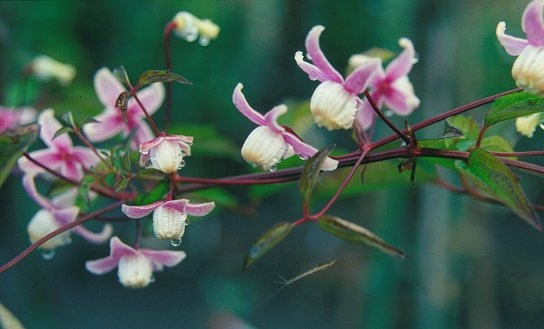 Clematis of the Month for December 2002

with many thanks for the photos to Mike Brown

Clematis ranunculoides is not one of the more celebrated members of the genus, but in one respect it may be a little too well-known. The plant has been attended all too often with disappointment of one sort or another. It is in the first place hard if not impossible to find in the trade, though in its native parts of China it isn't unduly rare. For most of us that means it has to be raised from seed, and even the seed may not always be easy to come by. But that is hardly the worst of it. Once germinated, the seedlings may take off promisingly and do well, even to producing a modest bloom the first year. But the tales of horror begin at about that point. Many a capable gardener has found that the plant did not reappear, having dropped off during the winter, or, if it did survive, it might not perform any better the second time around. The track record of the species in cultivation simply hasn't been full enough yet for us to know exactly how to cater for it, given the great variety of our garden sites.

Well, then, why bother with it? Why feature it as a Clematis of the Month?

The all-sufficing answer is that when C. ranunculoides is good it is very, very good. In fact, for a plant that is not likely to grow as tall as six feet (2m) and usually tops out well below that, it is not merely distinctive, but oddly important-looking. One learns to watch it as if it were about to do something momentous. And when it finally turns on full power in bloom, it can be surprisingly beautiful.

Though some plants of C. ranunculoides have been known to climb, most are herbaceous erect, and hence bear all their flowers on new wood. For the greater part of the growing season their garden identity is that of a foliage plant. Strong purplish-red stalks jut out in opposing pairs from the base and along the central stem, bearing leaves divided variously into as many as five coarse-toothed leaflets of a fairly dark green, some of them faintly edged in bronze. The leaflets often coil and twist as they grow, and they tend to darken with age, so the late foliage that surrounds the bloom is lighter by comparison and more delicate. 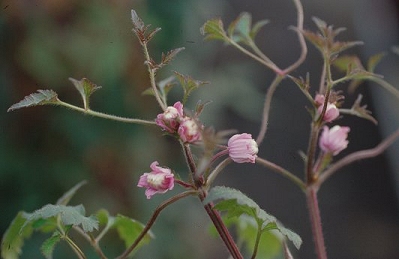 Fairly late in the year (though individual gardeners report it happens earlier with them) flowerbuds begin to appear in the upper axils, sometimes singly, sometimes in groups of two or three, looking at first like small, flat rosebuds. These gradually develop short stems, usually with a crook in them, so that except for an occasional rebel the flowers will usually nod to some degree. The bud, however, is such an attraction that one is in no tremendous hurry to see it break open. It is tear-drop shaped and noticeably ribbed, suggesting a Chinese paper lantern, and colourful enough to play off well against the rather craggy-looking young foliage and its dark reddish stems. When it opens at last, the flower is an uniquely-shaped bell, broad-based, no more than an inch across (3 cm), and remarkably good at drawing the eye. Its four sepals, deeply ribbed and often slightly hairy inside or out, spread wide and start recurving at the tips, showing a prominent tuft of stamens. (Botanical accounts of the stamens vary, but perhaps it will suffice to say that in casual garden inspection they appear pale yellow on top and somewhat pink and downy below.) On different specimens the bell can be a light, fresh pink, some shade of lavender, or even purplish red. Whatever the colour, in a full bloom those bells are deliciously appealing, and no one is likely to forget them.

So the fact is, no matter how hard it may be to arrive at that result, or how many gardeners are tempted to give up with the conviction that fate is against them, plant-lovers will go on hunting for the species and raising it from seed, experimenting to find out what it needs over time—full sun in most situations, and unimpeded drainage?—and feeling huge satisfaction when they see their treasured specimen break ground in the Spring. Not to mention when it gets around to delivering its flower show. The harder it is, of course, the more splendid is the victory.

To fill in some of the formal background: the species belongs to a section of the genus called Connatae, a large group of Asian and African clematis that includes such relatives as C. connata itself, C. lasiandra, and C. rehderiana (which we featured in an earlier Clematis of the Month). Though long familiar to botanists, most of these Connatae have yet to make a wide appearance in Western gardens, largely because gardeners have had little or no access to them, do not know many of them even by name, and so are unlikely to mount any campaigns on their behalf. That has been the case with C. ranunculoides, though there are signs lately that it may be close to winning a foothold in the trade.