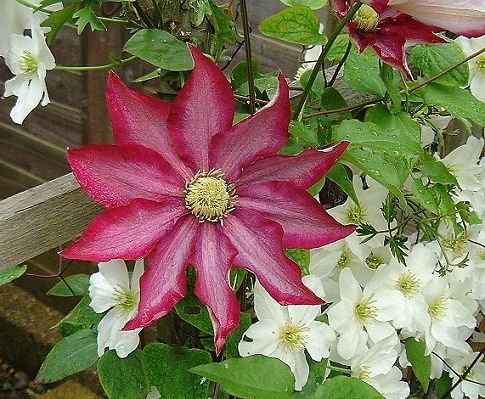 Clematis of the Month for April 2003

[Seen paired here with Clematis 'Kakio' in this south-facing corner of the Woolfendens' Hertfordshire (UK) garden is Blackthorn Nursery's 'Avalanche,' the largest-flowered selection yet produced from the New Zealand evergreen hybrid known as C. x cartmanii.]

"It's not pink, it's red!" That is the emphatic response you might draw from Mr. Kazushige Ozawa, the breeder of Clematis 'Kakio,' if you were to bring up the subject of C. PINK CHAMPAGNE (even if you somehow managed to include the ™.) The trade name under which this beautiful cultivar travelled and became popular in Western markets has never been much to his liking, and indeed C. 'Kakio' in the Japanese climate would undoubtedly seem more red than pink to most observers.

This happens, however, to be one of those plants that show dramatically how a crop of clematis flowers can vary in response to difference in their growing conditions. It is as if the plants kept a notebook on the long-term weather—the duration and intensity of light, the general drift of the temperatures, the fluctuating amounts of rainfall—and just before bloom all the genes conferred and decided which of them were in charge this time around. In some latitudes the margins of the Spring flower of C. 'Kakio' will be distinctly red, whilst in others they will be something nearer to a deep rose pink, and elsewhere, quite possibly a shade not far off violet. Besides which, a later run of circumstances might change the rules for the repeat bloom in all three places. 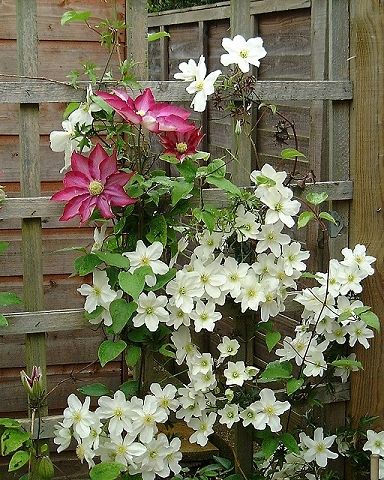 This is hardly fanciful. Consider the varied descriptions of the colour of the 'Kakio' flower in books and nursery lists. "Very deep pink with a mauve bar." "Pink with a red middle bar." "Purple pink." "Salmon-pink." "Purplish-pink darker at the margins." "Pink with white central bars." "Pale pink with mauve bar." "Vivid purple red or deep pink, bar pale mauve or even whitish, pink-veined." Of these, only the next-to-last (which unaccountably relates the plant to C. orientalis) is clearly mistaken. The last, from our new Clematis Register, is the one that best allows for the natural variability of the blossom. But even it does not cover one other variation, a deeply ancestral one, that 'Kakio' can offer: its first Spring flowers have been known to come up with red margins and an intense grayish-lavender area surrounding the midrib. (Naturally we have to add that all these blossoms may not fade in quite the same direction.) Yet for all their variability, they seem easy enough to recognize.

Leaving the colours aside for the moment, how else do we identify it? In the Spring it usually gives us eight (sometimes more) short-pointed sepals overlapping at the base, with an upward ripple along the margins. The area within is always noticeably lighter, and sometimes the midrib with its pinkish veins can almost disappear into that background. The center of the flower is in strong contrast, a tuft of upstanding yellow anthers that usually hide the white filaments underneath. In size the early blossoms can range from 5" to 8" (12-20cm). In repeat bloom on the new wood they are likely to have fewer and somewhat less opulent sepals—but again, circumstances rule. Now and again a plant can produce a prime-time flower in that late stage.

C. 'Kakio' is compact enough to be grown in a large container, being between 6' and 9' (2-3m) tall at maturity, and easy to groom. But it is adaptable to any of the garden uses of typical Group II (Group B) clematis. Its one fault in some gardeners' eyes is that its foliage can take a turn toward yellow, but a good cutting-back at the close of Spring bloom will ordinarily reduce that worry to a minimum. The plant is usually able to flower well enough on the summer's new wood to furnish an attractive crop of ornamental seedheads.

Everything we have said about this changeable beauty traces back to its origin. We know its parents. It comes from the crossing of the Japanese 'Star of India' (not the English one) with one of the true stud-horses—or brood-mares—of modern clematis hybridising, 'Ernest Markham.' What is most intriguing about this is that we do not know the exact lineage of either one of these parents; all we know is that they are both rich mixtures of old hybrid strains, whence any new offspring could inherit a wide range of possible behavior. The Ozawa hybrid 'Asao,' our Clematis of the Month for May 1997, was from the same pairing, and has obvious resemblances to 'Kakio,' including its very early bloomtime in the Spring, alongside the differences that make it worth offering on its own. Impossible as it may be to figure out exactly how they came by it, both cultivars are dominated by an inheritance from one distant ancestor, Clematis patens.

This unusually variable species, native to many regions of northern Asia, is most familiar to us as a white- or lavender-flowered clematis, and we might wonder how it factors into the breeding of so many striking dark-colored hybrids. But anyone who has seen one of the lavender forms of it struggle into bloom in a cold, changeable Spring has probably spotted some one or more of its flowers streaked or mottled with random colours, pink or red or even purplish, and contrasting bars that are not on the schedule at all during a normal season. The potentialities are there, waiting to be drawn out of latency and fixed by careful breeding. Beyond all that, however, the ancestral properties remain, ready to come into play and confound all the books and magazines, if only for a season. One of the best reasons for planting a clematis like C. 'Kakio' is that we can't be at all sure what it is going to do next. Gardeners planting to a rigid preconception need not apply.