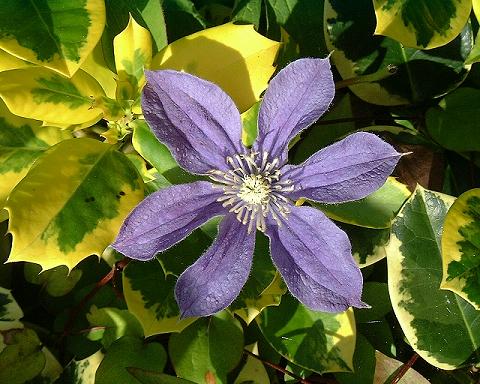 Clematis of the Month for August 2003

Though it was bred before 1990 (by Barry Fretwell), Clematis 'Arabella' has been widely accessible only since the mid-90s, but in that short time it has become one of the most popular of all the non-vining clematis. Not for any big, dramatic effects; it has no montana-like splurges of bloom, no specimen blossoms that dazzle the eye with their luxuriance or brilliant colours. Instead it is relatively unobtrusive at first, easy to lose among other, showier plants until suddenly in early or mid- summer it starts producing its comely buttercup blossoms—open-faced, no more than 3.5" (9cm) across at most, purple-blue with a reddish cast at first, then fading toward blue. With its instantly recognizable flower and its easy culture, 'Arabella' is pleasing enough in itself, but truly cut out for companion planting, as its entente with this variegated holly may suggest. (The holly is Ilex × altaclarensis 'Golden King.')

The flower may have up to eight sepals, though usually four—well separated, strongly ribbed, gradually developing a curl or billow along the margins—and in the center a prominent eye of stamens with yellow anthers. In our photographs, the yellow does not appear, for the good reason that the anthers have finished their job and their pollen is shed.

We do not know the exact parentage of 'Arabella,' but an integrifolia heritage is obvious in its pattern of growth. It is herbaceous, or nearly so. (In warm climates it may form a woody base and hence leave a little old growth above ground during the winter.) It sends up stems that are self-supporting at first, and in fact become woody enough to hold themselves nearly erect at their full height, which can be anywhere from 3' to 6' depending on their individual environment. Gardeners who fear the plant might start losing its balance can add support, either by staking, or by giving it sturdy neighbours. The leaves, by the way, may not conform strictly to the integrifolia pattern; instead of that utter simplicity some of them may be lobed or even ternate—no doubt a bequest from the other parent, thought to have been a large-flowered hybrid carrying lanuginosa blood. 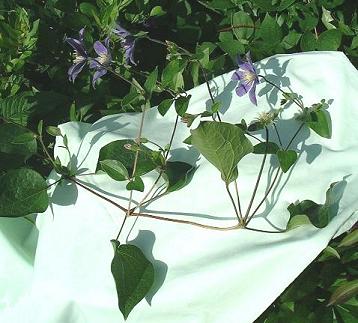 The stalks do not branch until they are almost ready to bloom, at which point they send out wiry stems in sets of two or three, as shown in the photograph to your right, usually with bracteoles about halfway up, and buds forming at the tips or at the one or two nodes next under. The pattern in the early bloom is a familiar one in clematis: a set of three buds with a fat lead-blossom in the middle. The two outer buds will normally wait until the one in the middle is finished and then open together, creating the heartening impression that the display, far from winding down, is just getting richer with time. And the process does last well. 'Arabella' once started is likely to bloom for many weeks, and when cut back after that can come on again if there is time before frost.

Though it did not figure in his first book, Clematis, in 1989, Barry Fretwell spoke of 'Arabella' in his Clematis as Companion Plants in 1994, nominating it as the longest-blooming clematis of all—"coming into flower in June, reaching a peak through the next three months, and then slowly waning in October." His choice for a host plant: "an open framework shrub rose," for which he instances Rosa 'Cymbeline' and 'Shropshire Lass,' and Choisya 'Sundance,' on account of its yellow leaves. It may be added that 'Arabella' makes a fine match (contrasting but harmonious) with other blues and purples in its own family, such as C. × durandii and C. × diversifolia 'Hendersonii,', or a lighter blue like 'Prince Charles.' In fact the list of profitable combinations is so large that it is tempting to go on and on, and on.

Cold weather will usually attend to all the pruning, but if anything is left above ground, the plant can be cleared to the very lowest buds in early Spring.