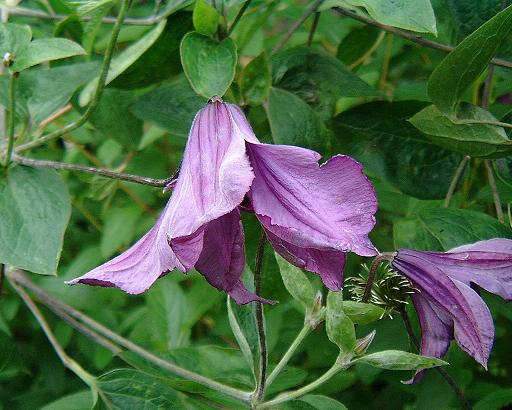 Clematis of the Month for October 2003

When we featured Clematis 'Kosmicheskaia Melodiia' just four months ago, it was with no thought of a leavetaking, but as we learned soon after, the eminent Ukrainian scholar who bred it, Professor Margarita Beskaravainaya, died in July, at the age of 75. This is not the place for an account of her accomplishments, but by way of admiring tribute we wish to turn to another of her hybrids now beginning to be widely offered—one out of the forty-odd she produced or helped to produce during her years of research at the Nikita State Botanical Garden near Yalta. 'Pamiat Serdtsa,' as it happens, means "memory of the heart."

It is one of a half-dozen "tall" C. integrifolia hybrids that have recently become attractions in the garden markets, though they are not at all the earliest in the field. Most clematis fanciers looking for an example would probably think first of C. × durandii, capable of 8'-9' (2.5-2.75 m.) which was produced more than a century ago by crossing the normally low-growing C. integrifolia with a large-flowered hybrid. Or possibly of the moderately tall cultivars we now lump together under the title of "diversifolias," which came about at various times through the crossing of C. integrifolia with the vigorous climber C. viticella or possibly one or another of its children. Nowadays through the continued interest of hybridists in getting all they can out of C. integrifolia we have a steadily expanding choice, with several taller-than-usual and several much-taller-than usual non-clinging cultivars that are all evidently akin and yet quite individual—Mr. Ozawa's 'Rooguchi,' for example, which may be the tallest; the Kivistik 'Juuli' and the Dutch 'Zoin,' which are midsized; and others besides 'Pamiat Serdtsa' from Yalta, including the much-praised 'Alionushka.'

What they have in common is a herbaceous habit of growth, a strong constitution, a willingness to perform in either sun or moderate shade, the integrifolia virtue of long-sustained bloom, and usually a trumpet- or cone-shaped flower. Fortunately for them and for us, it is in the details of the flower that they offer the most variety.

The flower of 'Pamiat Serdtsa,' ordinarily about 2.5" to 3" long (6-7.5cm), is especially graceful in shape, suspended on a slight crook in the stem, with its often ragged edges swept into a flounce that usually opens only part-way, not spreading wide as some integrifolia blossoms do. The colour is most often described as purple-violet, or something close to that, darker at the shiny midribs and paler in the margins. (Much paler in the interior.) The anthers, when one chances to see them, are yellow. Bloom begins in early summer and in a mature specimen should last for many weeks. When at last it starts winding down, gardeners with the requisite enterprise can cut the stems back and hope there is enough time left before frost for another bloom.

For those who would like to know the parentage of this handsome plant, it is given in the Clematis Register as C. 'Intermedia Rosea' × 'Candida,' the former being the bearer of the integrifolia blood, and the latter the large-flowered hybrid that used to be known as 'Lanuginosa Candida.'

Viewers may have noticed that no height is given above for 'Pamiat Serdtsa.' The height is almost uniformly listed in our best sources as 1.5 to 2m (5' to 6.5'). And for gardeners who have them both it goes without saying that it will be compared in size (and other properties) to 'Alionushka,' which preceded it into fame and is still better known. What we are finding in at least one corner of the world is that these two plants top out differently in different situations, and both of them can extend to 8' by bloom time. So it appears we could use some reports from gardeners anywhere who are growing one or the other of these, or both. Any viewers who qualify are kindly requested to follow through by writing the I.Cl.S., at clematis@dial.pipex.com, and telling us what is what. We will report back when we have forty answers, our humblest expectation.