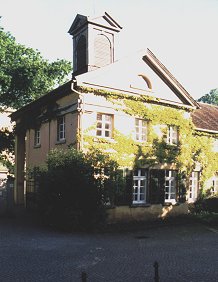 On Friday 18th June 1999 just over 30 members of the International Clematis Society gathered near Dortmund, Germany for a weekend of clematis and roses. 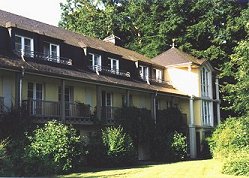 We stayed at Haus Villigst, an old Westfalian manor house standing by the Ruhr at Schwerte and now owned by the Evangelical Church of Westfalian. It is an impressive complex of buildings, with newly built accommodation and conference blocks surrounding the main house and courtyard. It is primarily used by this Lutheran group as a conference and training centre but can also be booked by independent groups. 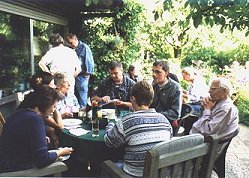 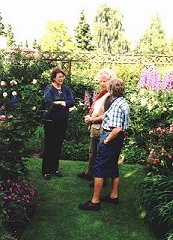 Friday night and we were invited to the house of Horst Weihrauch and Marianne Beyer for a barbecue. The evening was dry and very pleasant and allowed us to stroll around and enjoy their garden setting. Horst and Marianne moved here some 10 years ago and have remodelled the garden with trellis, mixed borders , trees, shrubs and, of course, clematis. Much thought has gone into the design and planting and this has achieved a very impressive collection. It was lovely to stroll around, greeting old friends and making new ones. And over the food and wine we all swapped stories of those clematis that have grown well this year, and those that haven't! 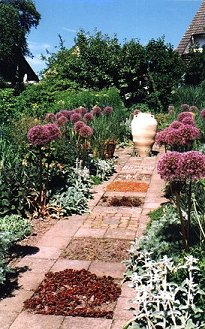 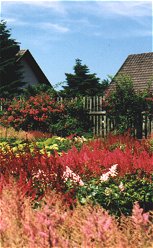 Saturday started bright and sunny and improved as the day went by. After breakfast we boarded the coach to take us to the nursery of Georg Arends. Established in 1888, the "Art and Trading Nursery" in Wuppertal-Ronsdorf was a pioneer in the breeding of hardy plants. Today there are numerous world famous perennials with the name "arendsii" and this work continues here today.

The nursery is currently managed by Georg's granddaughter, Ursula Maubach-Arends and great grand-daughter, Anja Maubach, who has worked with Alan Bloom in Bressingham, England. Ursula was away this weekend at a horticultural show but insisted her head gardener stay behind to talk to us about the origins of the nursery and their planting. He then gave us a conducted tour of both public and private areas. The photo on the right show a some of the varieties of Astilbe, many of which have been bred here. Quite a few members came away with specimens. 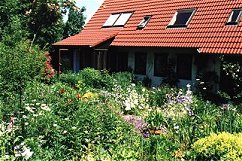 From the nursery the coach took us through suburban Dortmund to the house of Hermann Rieth and Renate Graumann, where we stopped to admire the garden and enjoy a picnic lunch in the sun. Hermann is a retired head of the Solingen city green department and now spends much of his time tending his one acre sloping plot in Bergische Land. 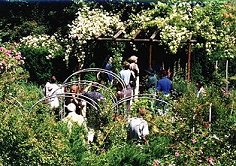 Whilst the front garden is well worth a close inspection and reminded me of the "classic" English garden, the back garden was quite breath-taking. Beyond an initial lawn area the ground drops away down a steep slope, into the distance, I'd estimate at least 100 - 200 metres, possibly more. All the way down the slope, whichever path you take (and there were at least two routes, taking independent paths and often hidden from each other) are a multitude of plants, different types in different areas, some in formal or semi formal displays, others "as they've grown". The work and effort to accomplish this on such a steep slope is a labour of love, since everything must be carried up and down the slope. But the result provides colour and interest all year round, with something to please everyone 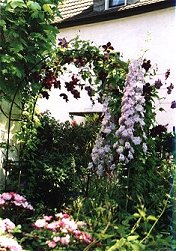 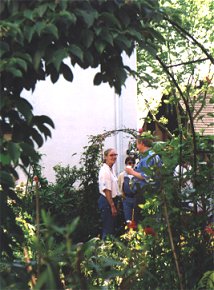 Our third visit this day was to the garden of Gisela Wiehle. A mature corner plot, not very large, but over the last 15 years Gisela has managed to plant almost every square centimetre, to the extent we had to take turns to wander around in the garden.

Gisela is an artist and you can see from her garden where she must get a lot of her inspiration. A few years ago she counted some 130 different clematis varieties, with many climbing up rose arches. In particular her combination planting, clematis with clematis or with other complementary plants, was particularly striking. 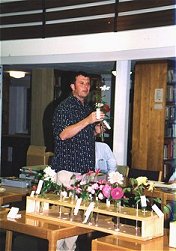 After a busy day and one for which we were very lucky with the weather, we returned to Haus Villigst and after supper assembled in one of their conference rooms. With Society business completed, we settled down to the two main items.

Klaus Körber had set out a large display of clematis and complementary plants which he used as the basis of a talk on the same subject. It's quite instructive to be shown such combinations side by side and by themselves. Pairings that work as well as those that don't, are easy to spot, and you don't have buy the plants yourself and wait for them to grow!

This was followed by Fiona Woolfenden and a lecture and slide show on "The Clematis of Estonia". With the recent death of Uno Kivistik, there has been an upsurge of interest in the clematis that originate from these parts. Fiona showed slides of all those featured in this years "Clematis International", as well as some other favourites. And as well as enjoying the slides it was, as Fiona said, also an opportunity for many of the group to "practice your English".

It was apparent how lucky we'd been with the weather on Saturday when we awoke on Sunday to a grey and slightly threatening sky. After breakfast we made our way to the Westfalen Park in Dortmund where the German Rose Society have their Rosarium.

The original Rosarium was founded in 1903 at Sangerhausen/Thüringen. However after 1945 access was impossible for many people and a new one was founded in Dortmund in 1972 by Gerd Krüßmann and Manfred Klose, with the help of propagation material fortunately smuggled out of Sangerhausen. Today there are an estimated 3000+ different varieties of rose within the park.

Unfortunately not only was the weather unkind, many of the roses had been recently pruned to encourage a subsequent flowering and so the gardens were not really at their best. However there were areas which were exceptions to this rule and they made you realize just how spectacular a sight Westfalen Park must be when they're all in flower.