The following is my first report of our recent event in Dresden, Germany, in July 2000. Follow these links for the other reports on the pre-conference visit to Warsaw, Poland, the Bayrische Landesanstalt (LWG) institute in Würzburg and my final round-up report. The first part of the event, including the Constitutional General Meeting, was held at the Sächsische Landesanstalt für Landwirtschaft (LA), the College for Agriculture and Horticulture of Saxony at Pillnitz, near Dresden. After a welcome from Dr. Wackwitz, the Director of the LA, we were conducted around their Horticultural School gardens. Though their focus tends to be on ground cover plants, shrub roses and plants for amenity usage, for example within cemeteries - this display generated a number of comments, they have a small but prospering collection of clematis. Two examples here are C. viticella 'Rubra' (left) and C. 'Tango' below. Note, there was considerable debate as to whether this should really be labelled C. 'Minuet'. Even the college acknowledge this query and like true "experts" even we couldn't agree. 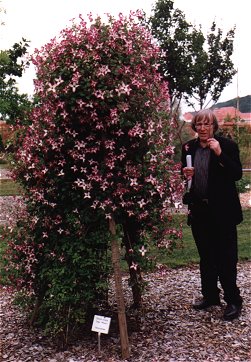 Their clematis collection has, however, been increased by the donations of various attending members who brought plants large and small from many countries for a planting ceremony by a recently rebuild wall. A superb site, this wall, which dates back nearly 100 years so I believe, made many of us envious of such a wonderful clematis display opportunity.

Pillnitz has some other famous sites, notably Pillnitz Schloss (Pillnitz castle), a grand building currently being restored and notable for the mock-oriental decoration. 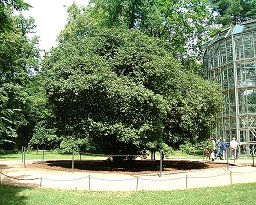 Its other claim to fame is one of, if not the, oldest camellia alive today. Brought from Japan in 1776, four camellias were imported into Europe. Standing some 9 metres high, this plant has survived not only the weather but also a fire in 1905, which destroyed the building constructed to protect it from the winter frosts. Today there is a moving greenhouse, built in 1992 and complete with full environmental control, which slides out on its rails every autumn to surround the camellia and protect it from the winter elements. The countryside around Dresden and Pillnitz is beautiful, but none more than 'Bastei', the sandstone mountains of the Elbe. The structures must be seen to be believed, such are the weird vertical stone columns that have been formed over millennia of wind and water. With a walkway that allows you to explore many of these strange formations at close quarters, it's an enchanting place for contemplating nature in all its glory. We had time to explore before taking dinner at the mountain top restaurant. There's also an open-air theatre in the valley bottom, performances down there must be something very special. This, the first of a series of informal reports, is not a chronological account, rather I aim to feature a variety of different aspects each month. So I'll leave you with a taster for next month and a personal favorite. My first celebrates the pre-Dresden event in Warsaw, Poland in which some 23 members participated. Organised (and very efficiently and effectively) by Szczepan Marczynski, for most of us this was our first experience in Poland and one that few will forget. Szczepan and Barbara made us so welcome at their immaculately organised and run nursery outside of Warsaw. More of that in future reports, but for now I give you Szczepan and Brother Stefan, welcoming us in Brother Stefan Franczak's garden, the birthplace of so many clematis.

And finally, it's the famous, or is it infamous, "traba" the East European Trabant "peoples car". Quaint and nowadays quite a collectors car, but I don't think I'll be buying one. Follow these links for the other reports on the pre-conference visit to Warsaw, Poland, the Bayrische Landesanstalt (LWG) institute in Würzburg and my final round-up report.