This is the third and final part of my informal reports on the Meeting and Conference of the International Clematis Society in Ireland in June/July 2006. To read the first report click here. To read the second of my reports, please click here.

I have covered the private garden visits in my previous two reports, so for this final one I'll concentrate on the outstanding (in more ways than one) gardens open to the general public, plus our gala dinner event. 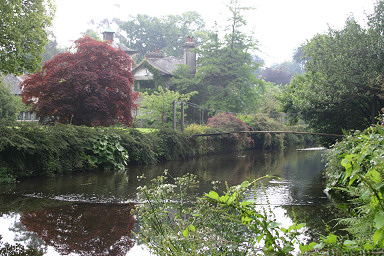 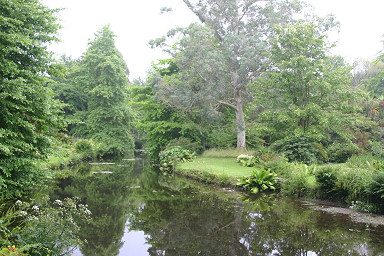 Because it occupies quite a large area, the extensive plant collection, said to contain at least 5000 different species from all over the world, is well spread out and this makes strolling around a very relaxing occupation. There are many paths to choose from, each with their own "little gems" tucked around the corners. 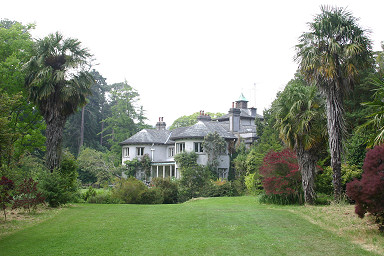 There are also a number of grand wide "boulevard" style walks, many creating vistas for the house that lies in the centre of the grounds. Mount Usher is good to visit in both spring - for the azaleas, camellias, magnolias and rhododendrons - and in autumn when the shrubs and trees take over with their changing colour foliage and fruits and berries.

The history and origins of Mount Usher appear to be that originally there was a cottage and small mill on the site. A Dublin businessman, Edward Walpole Senior, used to go walking in the area and eventually took over the estate, planting it with a very personal and diverse collection gathered from many different locations and in the style of William Robinson, the famous Irish garden designer who believed in informal and natural design as opposed to the rigid and formal layouts of prior times. 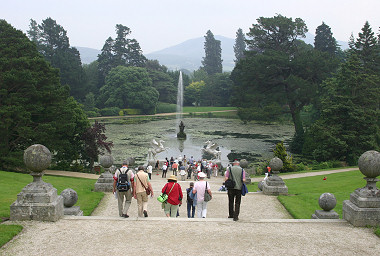 In total contrast we finished the day at Powerscourt. This mainly 18th century house and gardens, with an Italian theme that was added a century later, demonstrate the much more formal approach to garden design that preceded Robinson and Mount Usher.

The first thing you notice about Powerscourt, other than it's vast size (over 45 acres) are the fountains. I didn't count them all but they seem to be everywhere. And quite magnificent they are as well.

The grounds are divided into a number of discrete gardens, each with a different theme and complementary planting. 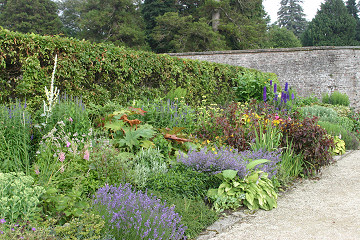 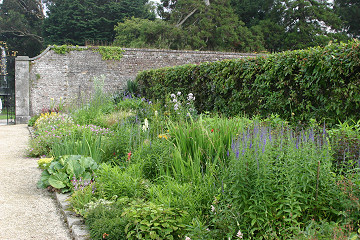 The Walled Garden, with its very colourful herbaceous borders, was a particular favourite with many of the group. The walled garden also contained an extensive rose collection. And of course there was the obligatory small fountain! 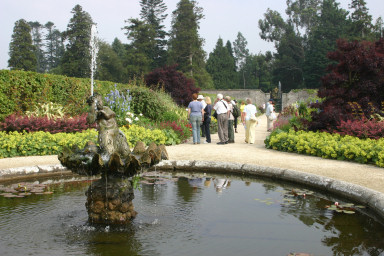 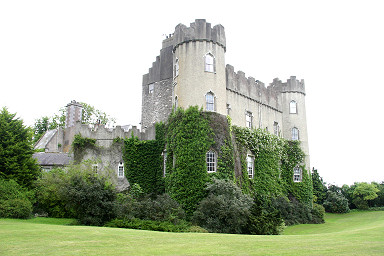 Our final day and my group (for some venues we were split into two visits, such was the popularity of this Conference and Meeting) went first to Malahide Castle and Gardens. Dating from the 12th century, the estate was in the hands of the Talbot family for nearly 800 years, up to the death of the last Lord Talbot in 1973. A major feature are the Talbot Botanic Gardens which were created during the 20th century by the last Lord Talbot.

Unfortunately there was an organisational issue with the responsible authority which meant we ended up with a little less time to visit than expected. However according to everyone that I spoke to, the guided tour of the gardens was outstanding. I gather this was due both to the wonderful plant collection and to the knowledge and attitude of our guide. 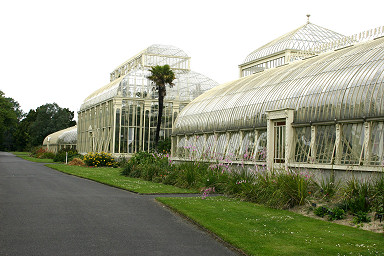 From Malahide, we travelled to the outskirts of Dublin and the Glasnevin Botanic Gardens. Dating back to 1795, these Botanic Gardens hold extensive collections of a great many species, both outdoors and in the many glasshouses. We had but a short time to visit, so our guide took us to just a few of the many highlights. In fact, it was only when researching some facts for this report that I realised just how big the gardens are. There is certainly far too much for a single visit, however long you spent here. 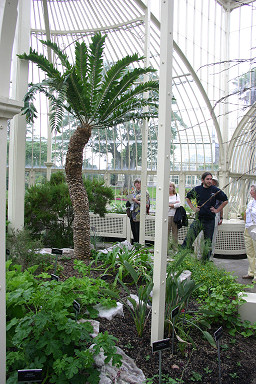 I always enjoy glasshouses and there were some very fine examples at Glasnevin, with many of the older ones having been restored not that many years ago. Glasnevin has the honour of holding the first example of the Wollemi Pine (Wollemia nobilis) in Ireland. 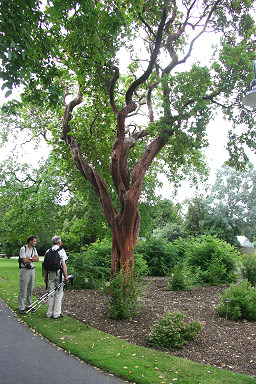 Outside the glasshouses there are just as many plants of interest. There is a good collection of mature trees around the gardens, but also plenty of other plants. 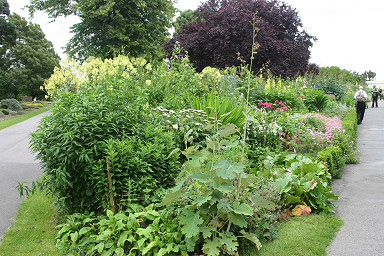 All too soon it was time to leave. We barely scratched the surface of what Glasnevin has to offer and I think it would need many visits before you could claim to have done it justice.

For the last visit of the day we went to Farmleigh. This large estate just by Phoenix Park in Dublin was purchased by the Irish Government only a few years ago. After restoration of the house and gardens it is now open to the genera public.

The house dated back to the late 18th century though it has been extended and modified a great deal over the years. It was owned by members of the Guiness family for most of its life. Now it is used by the Irish government as the prestigious venue for visiting heads of governments, etc., as well as being enjoyed by the people. 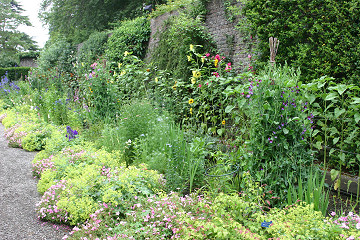 Restoration of the estate gardens was started in 2001 and the planting will benefit from another few years to get become established. However the themes are already visible and showing promise. In the few years that house and gardens have been open it has already become a very popular and visited property. 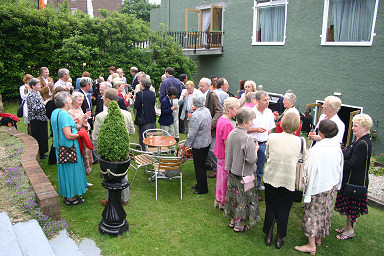 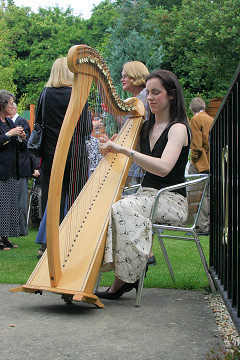 The final event of the programme was the Gala Dinner, held at the Fitzpatricks Castle Hotel, Killiney, a magnificent castellated building. On arrival we enjoyed drinks on the terrace to the strains of traditional Irish harp music. Fortunately the weather, which had been quite unpredictable for much of the day and had included the odd shower of rain, had cleared up and it was by now very pleasant.

The dinner itself was superb, a tribute to the quality of the Irish ingredients and an example of Irish fine dining at its best. 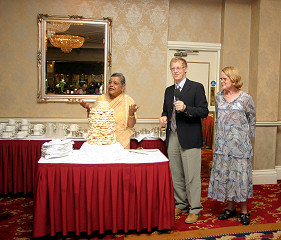 After dinner, Mary Toomey addressed the attendees, thanking the various sponsors who had helped in a number of ways to make this Conference and Meeting a success, as well as the staff of Ovation who had worked tirelessly prior to and throughout the week ensuring everything ran smoothly. But there was one surprise left! Bengt and Karin Sundström from Sweden produced the traditional Swedish "meringue" style cake that you can see in the centre of the picture to your left. How they had transported it from Sweden, and without breakage, I do not know. It is a cake of celebration and made a striking end to a memorable meal and highly successful visit of the International Clematis Society to Dublin and Ireland.

And so I will finish this third and final of my informal reports on our Conference and Meeting in Dublin, Ireland with the traditional group photo, taken at the beginning of our visit to Powerscourt. There will be further reports of the events, penned by other attendees, in Clematis International 2007. And to reread my earlier reports, click here for the first report and here for the second one. 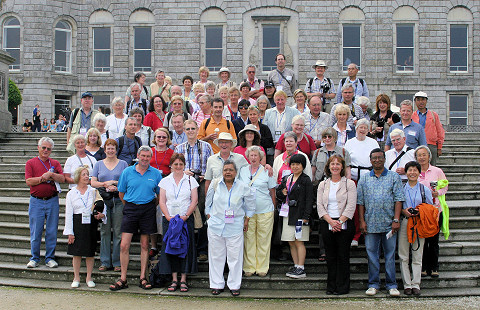