For my second report I'll take you on a tour of the nurseries we visited in Oregon, as well as a special treat, a look around the clematis collection of Brewster Rogerson. But in case you missed last month, my first report is still available, looking around some of the gardens, both public and private, that we visited. 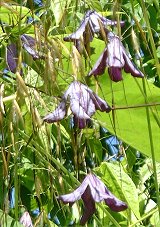 It was a hot sunny morning as we drove down through Willamette Valley to Springfield, the home of Gossler Farms Nursery. Although famous for their magnolia collection, they actually have a very wide range of plants, very attractively set out in their large island display beds.

Barely had we alighted the coach when I spotted a wonderful C. texensis Austin form. However it was the species C. viticella which really drew the crowds. Here I show one corner of the plant, which must have been over 2 metres tall and almost as wide, as it scrambles though some ornamental grass, the nodding heads of the viticella complementing beautifully the seeds of the grass.

Gossler are obviously very keen on natural planting, of growing one plant through another (hence their interest in clematis, it would seem), and finding planting combinations where the whole is definitely greater than the sum of the parts. They have been very successful with this approach. 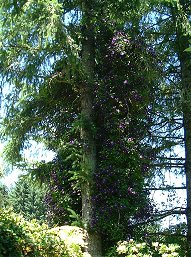 Next stop on this hot July day was NorthWest Garden Nursery. As you enter the gardens, it's very easy to miss the magnificent specimen of C. viticella 'Etoile Violette' , which must be over 10 metres in height in the conifer by the entrance. Apparently it was planted over 10 years ago and has never been pruned. So you don't need to prune to produce a display of flowers to be proud of, but you may get a stiff neck from always looking upwards if you don't. 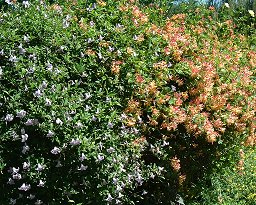 Ernie and Marietta O'Byrne are obviously keen on complimentary colour combinations and have many examples that include clematis. Roses and clematis have long been known to work well together and their C. 'Perle d'Azur' next to a peach coloured rose shows this very well. Perhaps a less common combination, though just as striking, was C. 'Blue Boy' and a honeysuckle. 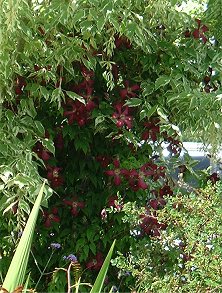 It was a very hot afternoon when we visited David and Dorothy Rodal at their Exuberant Gardens nursery on Sauvie Island, a little outside of Portland. They moved to Oregon some five years ago in order to open a clematis nursery, David's passion. As they say, they have a display garden "which is exuberant, but which is never going to be tidy". As well as containing many clematis it has an abundance of trees, shrubs, roses—especially old-fashioned varieties—and perennials. 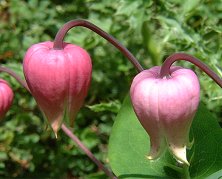 The vivid colour of C. viticella 'Madame Julia Corovon', pictured to your left, against the light fresh green of Acer negundo variagata was just one of many attractive vistas. But just before we left I overheard someone ask whether the "versicolor was as good as usual?" I hurried round to the font of the house, scrambled through some very unfriendly undergrowth and there, hidden from general view, was C. versicolor in all it's splendid simple glory. Well worth a few scratches and nettle stings.

Our fourth and final nursery was Joy Creek in Scappoose. Was this leaving the best 'till last? I think so but see whether you agree. 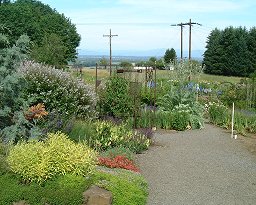 Owned and run by Scott Christy, Maurice Horn and Mike Smith, Joy Creek is known throughout Oregon and, indeed, the Pacific Northwest as a source of a huge variety of plants of all shapes and size. The clematis section within their catalogue alone contains over 130 different varieties.

They have a number of display gardens within the extensive nursery, categorized either by the plants themselves or by a particular planting strategy, for example the Four Seasons Garden, Woodland Garden or the Mediterranean Garden to name but a few. To do all the gardens justice one really needs at least a day, and weather not quite as hot as we had. 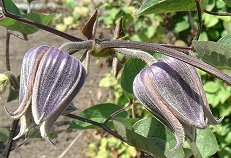 Offering a Garden Design service as well, one would expect the display gardens to be quite impressive, and they were. Swaths of colour, bold planting, subtle planting and a great many very interesting plants. Something for everyone, as was obvious by the way members darted here and there as different plants took there fancy.

And whilst it's difficult to pick just one, my fancy was taken by the C. ianthina var. ianthina—or as it used to be known, C. fusca var. violacea—seen here to your right. Perhaps not everyones delight, I find the shape and colour strangely attractive. 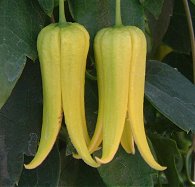 The final visit on this report was to the collection of Brewster Rogerson, housed at the Gutmann's Nursery. Difficult to know where to begin, such were the treasures that faced us as we walked into the first of the greenhouses. However I quickly spotted Clematis DJHC795 (see left), a yellow hanging clematis awaiting identification and that featured in Clematis International 2001. A striking flower, seeing it in real life (until this day I'd only ever seen slides of it) I was also interested to note the leaves, which appear to have small spur-like shapes on their edges. 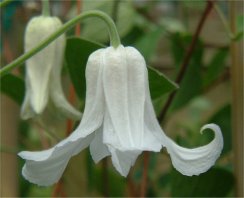 Clematis integrifolia 'Alba' (see right) may not be so uncommon but is still beautiful as the typically shaped flowers hang gracefully on their extended stems. The integrifolias have gained in popularity over the last few years as people have realized their versatility in the garden. New introductions such as 'Blue Boy' and 'Rooguchi' have also helped. C. integrifolia was a previous Clematis of the Month, you can find it in the Late Small Flowers Cultivars category. 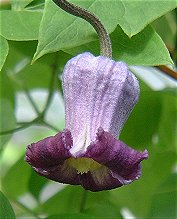 Given the time of year, the main clematis in flower were, quite naturally, the viticellas and late flowered cultivars. I've selected just one more of the many I liked, C. pitcheri (see left). Small but beautifully formed, with lovely rolled ends to the sepals. Brewster also had a number of interesting pitcheri seedlings.

This is my second and last report from the Portland 2001 Conference. I hope you've enjoyed them both, for those who attended as a reminder of a wonderful visit and for others to tempt you to join us some time in the future. A comprehensive report of all activities will appear in Clematis International 2002. And next year we will be in Warsaw, Poland. Why not come along? Finally I must thank again all those whose hard work made the event such a success. I won't try to list all their names, there are too many. So a big "Thank you" to you all, organizers, planners, helpers, sponsors, guides, from all the attendees, seen below. 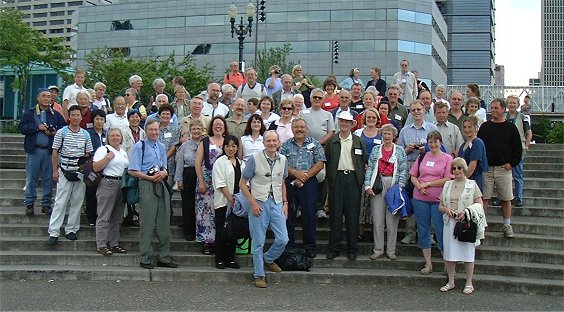