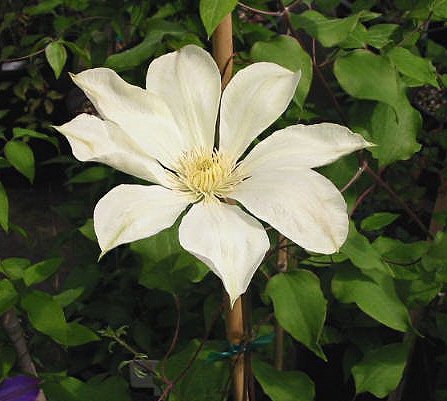 Clematis of the Month for March 2005

In an earlier clematis of the month on C. 'Guernsey Cream' (April 2001) we spoke of a small group of hybrids with flowers that come nearest to a true yellow, and mentioned among them the plant of uncertain lineage called 'Moonlight'. We return to it partly for its own merits, but also partly to warn of a confusion about it which, though it has long since been explained and (one would have thought) dispelled, still manages to pop up here and there in the trade.

C. 'Moonlight' came originally from Sweden, from the nursery of Magnus Johnson, who received it in the 1940s as a seedling from an old garden in Copenhagen. It was thought to have been produced by one or the other of two venerable hybrids, C. 'Lawsoniana' or C. 'Henryi', but there was no other hint as to its origin. In the 1970s, when stocks of it were introduced in England, by mischance one of the two nurseries that offered it confused it with another cultivar they had received from Holland, and the two went forth together under the name 'Yellow Queen'. It was Magnus Johnson himself who discovered the error during a visit to England in the 1980s. Meanwhile the other nursery, Jim Fisk's, had been offering the plant under the name of their own coinage, 'Moonlight', and Johnson thought best to adopt that name. 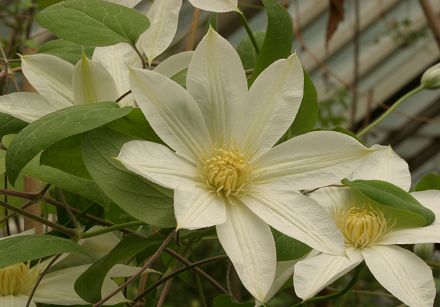 The plant with which it was temporarily confused is the one we now widely known by its trade designation, WADA'S PRIMROSE—or to use its underlying cultivar name, C. patens 'Manshuu Ki'.

The two cultivars have indeed much in common, but they are easily distinguishable in both foliage and flower. The mainly ternate leaves of 'Moonlight' are of a relatively dark and uniform matt green, with little dips and hollows in their surface, though they tend to flatten out later. They afford an impressive backdrop for the flowers. The foliage of WADA'S PRIMROSE, again mainly ternate, is lighter in both texture and color, the leaflets being usually smaller and more delicate in appearance. In some climates the foliage of both cultivars can deteriorate at midseason, after the spring bloom, so it is worth observing that both (but especially WADA'S PRIMROSE) respond well to a fairly aggressive pruning at that stage, and bloom well on their later wood.

As to height, both plants are in the six foot to eight foot range, (two to two and a half metres), 'Moonlight' being somewhat the weaker growing, and hence well-suited to small spaces and container culture.

It is in the flower that the two cultivars differ most, though it takes observation over several seasons to find how great the difference can be. The flowers of WADA'S PRIMROSE may vary in the number of sepals—ordinarily six to eight—but the result is habitually a symmetrical flower, overlapping at the base, pointy at the tips and light yellow, green-ribbed in the early going. 'Moonlight' too will usually have six to eight sepals, but it can have several more at times and even develops a side-show of petaloid staminodes around its center of pale yellow stamens. Such shows are rare, but with 'Moonlight' there is always the interest of whether the next flower will have few sepals or many overlapping at the base or gappy, green-ribbed or not. Always there is the likelihood of a relaxed irregular wild look, which for many is the principal attraction of the plant. The colour at least is predictable—a pale greenish yellow fading soon to creamy white. The color holds longest, and the plant looks its best, in light shade. On a warm Spring day in dappled shade 'Moonlight' in full bloom can be a memorably refreshing sight. A lime drink would go well with it. As we might expect, evidence is mixed as to whether it has a fragrance.

There really is no excuse for any residual confusion between these two cultivars, or for the listing of 'Moonlight' as 'Yellow Queen'.