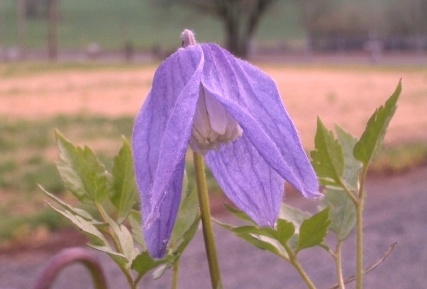 Clematis of the Month for May 2005

For clematis-watchers one of the notable trends over the past two decades has been the expansion of interest in the species native to North America. In the forefront, quite naturally, have been the species known to botanists as Section Viorna, or in more familiar terms, the Leatherflowers—though the supply of these has rarely been equal to the demand (witness the inappeasable appetite for C. texensis). Gardeners have been increasingly won by the charm of their tough-textured urn or tulip-shaped bells and breeders by their promise of interesting additions to the gene pool. Clematis lovers everywhere seem to be on constant lookout for plants or authentic seed of such plants as C. viorna, C. crispa and C. pitcheri, and their non-vining compatriots such as C. addisonii. We have previously featured C. viorna and C. coactilis in this series.

But Section Viorna need not have quite all the attention—far to the west of those mainly southern and south-eastern species, along the vast stretch of high country known as the Rocky Mountains, there are widely scattered populations of clematis with very different antecedents, by name C. occidentalis and C. columbiana. These are the American Atragenes, close relatives of C. alpina. Our clematis above, C. columbiana var. tenuiloba, belongs with these two, but is a plant so different that one is tempted to think of it a species in its own right. Unlike the other two, it is not a vine. C. columbiana is a climber-rambler of modest proportions that produces wispy and alpina-like flowers of pale pink to lavender. 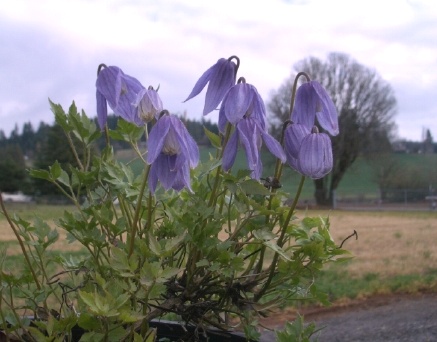 The tenuiloba variant, alone among the Atragenes is instead a low-growing mat-forming erect plant, that sends up wiry stems each bearing a single comely one inch to one and a half inch bell (2.5-3.5 cm). The colours may vary depending on the site and the early season weather. Pink and even red flowers have been reported, but the best specimens known to be available (if hard to find) at present are a strong blue-purple. A selection know as 'Ylva', recently available in England, has bells of that deep colouration. The flowers have four sepals, slightly reflexed at the tips, some of which may draw apart enough to reveal a sturdy core of stamens (filaments light cream anthers slightly darker cream and connectives darker yet). The ring of staminodes is too far inside the bloom to be seen without digging for them. The flower nods at a height of five to seven inches (12 to 18 cm) on the usual atragene shepherd's crook where it will be followed by the usual silken seedhead.

Like most other Atragenes, this one is not averse to layering itself underground, and it characteristically sends out runners beneath or even at the soil surface which can later begin building a new clump. So in cultivation it would like some room. It can be grown in a trough or in open ground if it has fairly gravelly soil, good drainage, and perhaps protection from hot summer sun. It can even be grown against a rock or hard place if the intent is to challenge its runner-making capabilities. This is a clematis born in and suited to nooks and crannies.