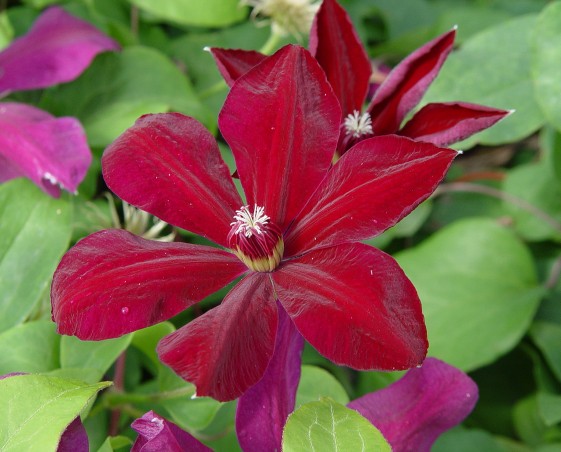 Clematis of the Month for June 2005

Clematis 'Westerplatte' was raised by Brother Stefan Franczak of Poland some time prior to 1994, no one is quite certain exactly when. Similarly the parentage of C. 'Westerplatte' is unknown. It is named in honour of the heroes of the First Armoured Brigade based on the Westerplatte peninsula at Gdansk Bay. During the period between the two world wars, there was a Polish military unit stationed near Gdansk, protecting the port. In 1939 an armoured German battleship bombarded Westerplatte and the soldiers defended it against the Nazi forces for 7 days. Since that time Westerplatte has symbolized soldiers' heroism.

Brother Stefan Franczak has raised many interesting clematis. This stunning cultivar is worthy to be named after this significant event in Polish history by a very eminent clematis breeder.

There are only a few really red clematis and 'Westerplatte' has all the good properties to make it an interesting clematis for every garden, but especially for the smaller garden. The dark velvety-red flowers are made up of broad, overlapping, perfectly formed petals which also recurve at the tips, giving the flowers a very nice rounded appearance. The flowers of 'Westerplatte' vary in colour with the kind of light and the place where it grows in the garden. When in shade, the flowers are typically velour red, a difficult colour to capture in a picture. It is also known that in certain lights the red colour appears lighter.

The stamens have deep-red filaments which create an interesting harmony with the yellow anthers. The best place in the garden is in half shade but with light background, so that the red flowers stand out well.

'Westerplatte' grows to about 2 metres (6 feet) and is a spring-flowering cultivar with a long season of medium-sized flowers of diameter 10-12 cms (4 to 5 inches). After flowering, prune back the top one-third to one-half of some stems, this will result in a second flush of flowers in late summer on the new growth. 'Westerplatte' is Prune Group 2.

This clematis is useful for many applications and locations because of the beautiful red flowers, the compact growth of the plant and its health and resistance to pests and diseases.

You can make beautiful border displays with plants and shrubs in combination with 'Westerplatte', roses in particular are very effective. Let the clematis grow in a border - it will grow into and through other plants and shrubs and the flowers will suddenly appear above the plants.

Because 'Westerplatte' does not grow too high or vigorously, it makes a good companion to grow with a yellow or white rose. It will not grow too fast so that it will not smother the rose, which can be a problem with some other clematis. Being fairly compact, it is very suitable for growing over a small obelisk or on a trellis, especially together with a late flowering clematis.

'Westerplatte' is even good to grow in a container. Put two plants in a container with good soil and place the container in half shade. Give the plants enough water and regular fertilizer and you get an eye-catching display. By pruning each stem after it has had its first flush of flowers you should get a second flush and the plants will have flowers from spring to the end of summer. And finally, 'Westerplatte' is even suitable for cut flowers.

For me it is one of my favourites because this clematis has such a lot of good qualities. 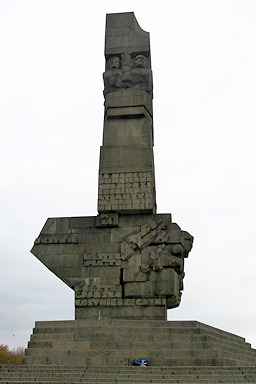 Editor's Note: Since this Clematis of the Month was written, I visited Gdansk. The city is known by most people, I suspect, as the birthplace of Solidarność (Solidarity Trade Union Movement). But as Ton says above, it has another claim to fame as the peninsular at the entrance of Gdansk harbour where World War II started. On 1st September 1939 the German battleship Schleswig-Holstein shelled the Polish garrison that was based on this peninsula. In spite of over-whelming odds and much to the surprise of the German command, a handful of Polish soldiers, around 220 in total, held out for 7 days.

This battle and the Polish soldiers who fought in it, are remembered in Polish history, so it is not surprising that Brother Stefan Franczak named

Clematis 'Westerplatte' in honour of these heros.

This monument to these men (see right) stands on a small hill at the end of the peninsular. Against a grey November sky it forms a grim and stark reminder of what occurred here so many years ago.