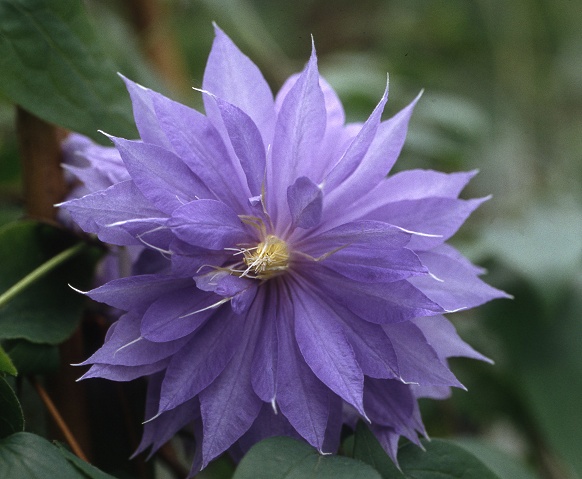 Clematis of the Month for July 2005

Chances are that most gardeners who offer a home to C. 'Daniel Deronda' will take one look at Jan Lindmark's photograph above and say, "My 'Daniel' never does that!" For though 'Daniel Deronda' can indeed produce fully double flowers in its Spring bloom, in most situations it is more likely to come up semi double or single, and that is the way it is almost always described in nursery catalogues. What is most interesting about the plant, however—and it is surprising how little is made of this in the usual descriptions—is the almost endless variability of the individual blossoms especially those in the spring, which are predictably larger and more complex than those that follow on new wood later in the year. 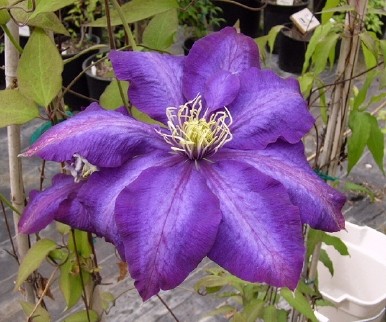 In its simplest form the blossom consists of seven or eight upward-facing sepals overlapping at the base but narrowing sufficiently toward the pointed tips to suggest a star-shape rather than a wheel. They have a slight ripple along the margins, and the interior surfaces are so densely veined that they are full of minute hills and valleys. Hence they seldom lie completely flat. At the center of each sepal the midrib that becomes a contrasting bar in so many clematis is a slender track of varying color, sometimes prominent, sometimes not.

One more point about the simplest form of the flower—namely its colour. This is provided mainly by the wide deeply-tinted margins. Consensus on this is about evenly divided between dark violet-blue and blue-purple, with the color paling toward the middle of the sepal. Turn any of the sepals over, and it will be seen that the central area is under-pinned with white. And there is another intriguing touch of colour that appears at random, sometimes on one sepal or another: a little patch or streak of peach or clay-colour—a relic of some ancestor long past.

At the center of the flower is a core of stamens, the outstanding feature of which is a set of anthers with an unusual twisting pattern that will figure much later as a whorl atop the golden seedhead.

Perhaps it can be said of any clematis with the doubling capability that no two of its flowers are exactly alike, but this one makes the point with emphasis. It can add a full-sized sepal or two to the basic round, or mount a new layer of sepals on top of the first. But its more usual way is to generate smaller sepals in varying numbers and distribute them irregularly around the circle. These half sepals, if they may be so called, are like simplified versions of the majors ones, with cobalt margins and paler interiors. Such is their energy that they can even invade the eye of the flower—a procedure that a purist would deplore as messy if not downright illegal but which seems to interfere not at all with the general decor. The over-all impression is of a richly varied display, brought forth with an air of serene dignity.

The plant as a whole is of sturdy but not rampant growth, likely to reach 7 to 8 feet if container grown, and 8 to 10 feet or even higher if planted in the ground. The foliage has a distinction of its own. Mostly trifoliate, it has unusually long stalks with the leaflets widely separated, as if forming arms to support the coming flowers. The actual result, however, is that with 'Daniel Deronda' the flowers do not completely hide the foliage, and the welcome contrast is always part of the show.

Openness of structure helps to make this plant a good companion for others; it has been much used with roses and with other clematis that normally have their main grooming after the Spring bloom. But 'Daniel' is also a plant simply on its own—on a fence or arbor or trellis. And the repeat bloom in late summer, by the way, though it may lack the 7 to 8 inch expansiveness of the spring blossoms, has a satisfying beauty and energy.

'Daniel Deronda' is one of the several classic hybrids we owe to Charles Noble of Sunningdale Nurseries. Reportedly it was from a cross between C. lanuginosa and a seedling of ('Fortunei' × patens)—a powderkeg of possibilities. Noble was an admirer of the novelist Mary Ann Evans, known to fame as George Eliot—and though the clematis he named after her has not survived, this one named for the title character of one of her novels continues to serve as a worthy tribute. Noble introduced it in 1882. Just over a century later it received its English accolade—an Award of Garden Merit (AGM 1993). Possibly some of the judges were slow readers.