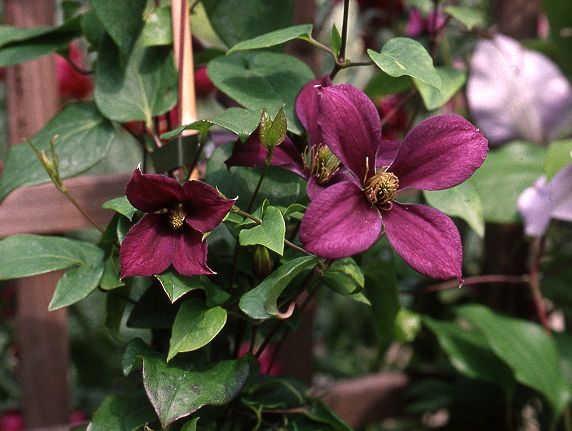 Clematis of the Month for September 2005

This adorable, easy to grow and compact clematis, first came to my notice in Barry Fretwell's 1994 book "Clematis as Companion Plants" and I have had the pleasure of growing it ever since.

In "The International Clematis Register and Checklist 2002", C. 'Lord Herschell' has only the briefest of mentions, just parentage unknown and a very basic description. (Our Registrar can only go on what information she is provided with). Do not let such a humble introduction put you off of growing this truly aristocratic gem of a plant. To obtain the best from most clematis and given the choice, I would normally recommend planting at least 99% of them in the ground. Lord Herschell belongs to the other 1%, a small but select group, that seem to perform better in containers. Even the one in Barry's book is in a container!

For the first six or seven years I had plants of C. Lord Herschell, I always had them only in containers. The reason for that was because it was an ideal plant to take to talks and Horticultural Shows. It comes into bloom just about every year, (in the UK) by the end of the first week in May and the same plant would still be in bloom by mid September, just right for a Horticultural Show that occurs in mid May and again in late September. The long flowering season is achieved by dead-heading old blooms and thus preventing seed heads forming. As the plant is never more than 1.2 metres tall, this removing of spent blooms is very simple.

Many raisers decline to declare parentage for obvious commercial reasons (as well as perhaps genuinely not knowing true parentage), however, it looks very much like C. integrifolia and C. texensis may well have been involved in producing C. 'Lord Herschell'. This would account for the rich colouring, the dwarf habit and the long blooming season. Whatever the parentage, the outcome is a very attractive outward facing trumpet flower, mid way between a hanging bell and an upward facing tulip. The colouring is a lustrous and intense velvety reddish purple to the human eye, (but not always that colour on photographic film). Both the anthers and stamens are pale green. The seed heads, (when they are permitted to remain), are not the normal silver or grey, they are a lovely autumn gold and when the sun is on them, are extremely attractive in their own right.

Even if the aim is not to obtain the longest possible flowering period, it is still worth dead-heading until the end of July because, although gorgeous to look at, I have never managed to germinate seed from this clematis, so why let it waste energy making seed when instead you could be enjoying so many more flowers? 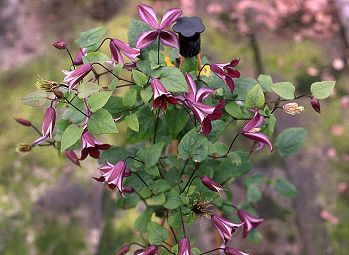 Propagating from this plant is relatively easy although there is only a very short period from when it first comes into growth until it starts to produce flower buds. Both nodal and inter-nodal cuttings are successful but as the plant is a true herbaceous perennial, there is not much point trying winter hardwood cuttings!

My best plants of C. 'Lord Herschell' are those grown in terracotta pots, because those grown in plastic containers need a much freer draining compost if they are to produce an equal display over the whole season. Regular liquid feeding will assist the plant to maintain foliage and bloom colour right through the flowering period. A decent amount of sunshine helps too! 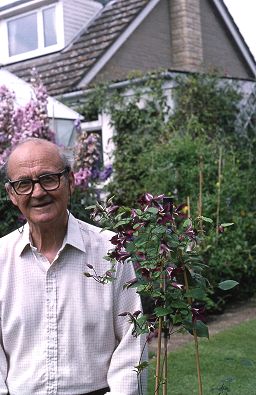 Whether grown as a specimen plant on it's own, or as part of an arrangement, this little clematis is a stunning sight. On it's own, I use a central support, normally a 1 metre high, square green plastic coated metal obelisk. When grown with other plants, I find that silver or grey foliaged plants are the best foil for the flowers of C. 'Lord Herschell'.

C. 'Lord Herschell', plus both the others just mentioned, were all raised by one of today's leading hybridisers, Barry Fretwell, of Peveril Clematis Nursery at Christow, near Exeter in Devon. That the same hybridiser should produce the best ever compact herbaceous clematis for a container (C. 'Lord Herschell') and the best ever herbaceous clematis for the garden (C. 'Arabella') would be more than enough for most people but Barry has produced many other fine clematis—C. 'Princess Diana' for example (Clematis of the Month for last month, August 2005 - Editor)—and he continues to do so. He obviously has the passion as well as the scientific knowledge. It shows in his wonderful clematis.