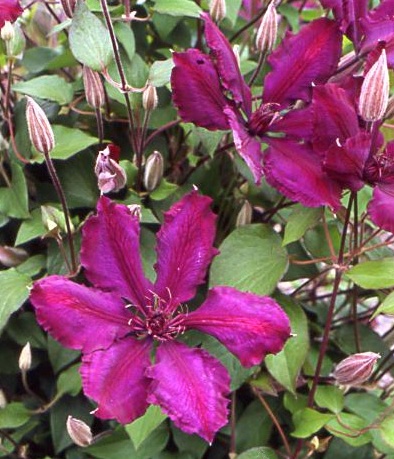 Clematis of the Month for October 2005

The fascination of Clematis 'Honora' lies in both the color progression of the maturing flowers, and their handsome poise, always presented facing slightly outward so that the viewer can see into the bowl of the blossom. The slender buds are elegantly pointed, and woolly. They open to reveal velvety burgundy surfaces-their initial color is quite uniform. Then as the sepals develop, their edges lighten and over a period of many days the central bars become prominent, holding the original dark color. The ongoing play of changing hues allows the flowers to remain beautiful longer than one would expect, and because it is a prolific bloomer, freshly opened flowers enhance the more mature blooms. The rosy petioles and gray undersides of the unfurling sepals provide additional complimentary details. 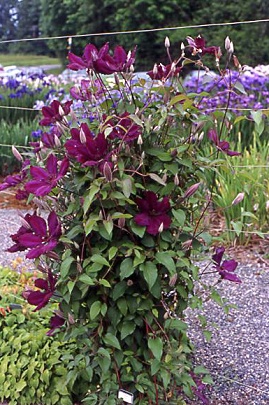 In addition to the parade of color, there is also a succession of flower shapes. The newly opened buds suggest that the mature flowers (up to six inches wide) will be full. Don't be fooled. The developing sepals elongate, showing gaps at their bases. The flowers ultimately flatten, until the sepals are hardly touching at all. This array of colors and shapes gives 'Honora' its undeniable allure.

Most texts and catalogues credit 'Honora' with reaching 8 to 12 feet in height. Here in the Pacific Northwest corner of the United States, she rarely shows such upward ambition, seeming to prefer to present herself on a more human scale. 'Honora' flowers from the ground up, and is willing to spread horizontal stems if a convenient plant partner is at hand. In our maritime climate this vine will begin flowering as early as May, whether it is hard pruned or not, although many writers suggest hard pruning at the end of winter is preferable. If the plant begins to sulk after the initial lengthy period of bloom, deadhead or groom lightly to induce a late summer performance.

There is some question about the color of the stamens. Some authors describe 'Honora' as having anthers and filaments of cream, however, photographs in major publications and on the web tell a different story. The images show the anthers to be as dark as the newly opened flowers, and the filaments to be lighter, with the dark anther color staining the top of the filaments. We hope that there is not some confusion in the trade, but it appears that in Europe and North America we are growing the same gorgeous plant.

This is yet another outstanding plant shepherded into our midst by Alister Keay of New Zealand, who registered the plant in 1998. It was found growing in the garden of Mrs. A. Edwards (who is the Allanah of 'Allanah') of Christchurch on the south island in 1968. If only we had a picture of Allanah Edwards' 'Honora' to be absolutely certain we are growing the clematis Alister Keay intended us to enjoy. None-the-less, the plant we call 'Honora', with her long-lasting procession of color, continues to cast her spell.