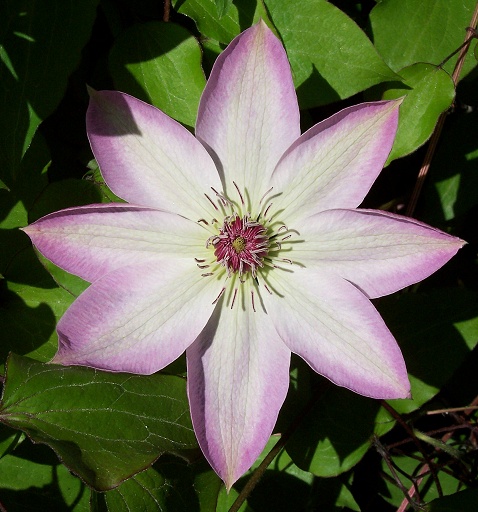 Clematis of the Month for November 2005

Clematis 'Dawn' belongs to the early flowering group (patens). According to The International Clematis Register and Checklist 2002 the description is:-

C. 'Dawn' was originally named C. 'Aurora', and was hybridized by a Swedish plantsman, Tage Lundell, about 1960. It is assumed to be a cross between C. 'Miss Bateman' or C. 'Moonlight' and C. 'Nelly Moser'. Later it was introduced by Treasures of Tenbury in England in 1969, but then under a new name, C. 'Dawn'. The reason for this was that the name Aurora had already been used for a cultivar raised by Noble about 1877, and thus could not be used again. However, the name has the same meaning: Aurora was the name of the Roman goddess of dawn. The name is very suitable for such a delicate flowering plant. 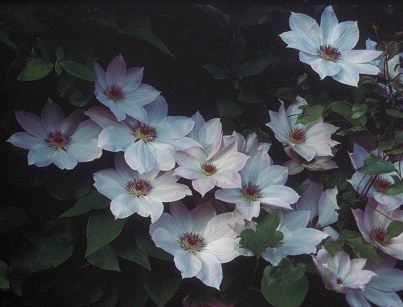 C. 'Dawn' has always been one of my favourites among clematis, for two reasons. When I started my interest in clematis, way back in 1975, as a novice with a new garden to plant, I happened to see a climbing plant with beautiful flowers growing at a wall (C. × jackmanii, of course), and decided to grow it in my garden. I also found that there was a lot more to this plant group than could be bought in Norwegian nurseries, and my appetite was wetted for more of these interesting plants. Through our local gardening club I received the address to Magnus Johnson in Sweden, and wrote him a letter. That was the beginning of a long friendship, and I still have a pile of his nicely handwritten letters with advice on which clematis to select in a harsh climate, and how to grow them. After sorting out the formalities, I was at last the proud owner of a few new clematis, which could not be obtained here. And amongst them was 'Dawn'.

The story has a continuation: After a few years Magnus lost his 'Dawn', and I was able to send him cuttings from my plant, which he managed to root and grow on. Then I moved to another garden, and had to leave quite a few of my plants behind. And once more I had a C. 'Dawn' sent from Magnus, now from the stock of "my" plant, and that's the one I have today.

Second, but not least, based on my experience 'Dawn' is one of the hardiest plants in its group. And that is a quite important quality if you want to grow plants from the early large flowering group in Norway. In our climate the rule is that this group will die back during a long, cold winter. After cutting away dead wood in the spring, there is usually not much left for the early flower show. As this group also has a very late second bloom, it will never give its best. That is of course why the late large flowering group of clematis is preferred; they will give a good display despite freezing back. But — 'Dawn' is different. It is very hardy, and even with no winter protection it has only minimal winter damage, not enough to destroy the beautiful spring display.

As the flowers fade badly in strong sunlight, a half shaded location is the right place for it. I have even grown it on an open north side, with satisfying results (no winter damage and many flowers). When the flowers open in the spring, they first will have a green hue. But with the warmer weather, they change to light pink purple, which then fades to almost white (how fast depends on the situation). But I enjoy my 'Dawn' tremendously every spring. Beautiful and easy going!