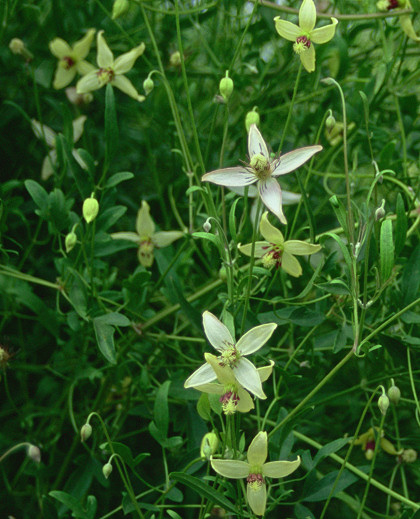 Clematis of the Month for March 2006

It is an unusual plant that attracts more attention when it is in seed than when in flower, and Clematis 'Sundance' is just such a plant. Which is not to say that the flowers are not charming, but rather that they are not showy. Unless paired in the garden with companion plants that will draw the eye to the dark violet anther connectives, the small flowers might be easy to overlook, even though they are produced in great volume. A close examination reveals that this hybrid of Clematis ispahanica and an unrecorded Clematis tangutica form, has primrose yellow tepals that fade to cream. The long period of bloom makes for a subtle but constant succession of flower and seedhead development.

The flowers may be delicate—especially when older—but the seedheads are substantial. Fully expanded, the breadth of the flower is more or less 1.5 to 2.25 inches wide, but the four tepals are narrow. The first flowers to open on a stem will be the largest, and those at the branch tips will be progressively smaller as their season continues from mid-summer well into autumn. The seed-tails quickly fluff out to 2 inches in length, and there are lots of them. The color of the seedheads is a sun-reflecting silver-white, eventually aging to gray. The combination of the flowers with their flipped and twisted tepals, and the glistening seedheads, begs for a dark background to set-off the many luminous details. Possible garden partners might be the dark Cotinus 'Royal Purple' or any of the numerous ruddy barberries. Either of these options will also draw attention to the dark-anthered eyes of 'Sundance'.

Standing between six and eight feet tall on upright stems, this clematis is more shrubby than vining. The foliage is fine and glaucus, and has been observed by others to be "almost bamboo-like", especially when young. The new stems are thin but will develop a woody base over time, and a mature plant forms a substantial mass up to eight feet across every year, whether hard pruned or not. If a coordinating host shrub is not available, a well-established plant of C. 'Sundance' will need a trellis for support. The specimen shown in these photos receives minimal summer water.

Brewster Rogerson first received this plant from Valley Clematis Nursery, who introduced it in 1994, under the name Clematis songarica 'Sundance'. This name has fallen out of favor, as has the short-lived alternative C. orientalis 'Sundance', simply because it is now clear that neither species has any obvious involvement in the parentage. From C. ispahanica, 'Sundance' gets its refined foliage and violet anther connectives, and from the mystery tangutica, it gets the fresh pale yellow on the newly opened tepals. However, it is still occasionally found in the trade as a selection of C. songarica, which would certainly fail a DNA test.