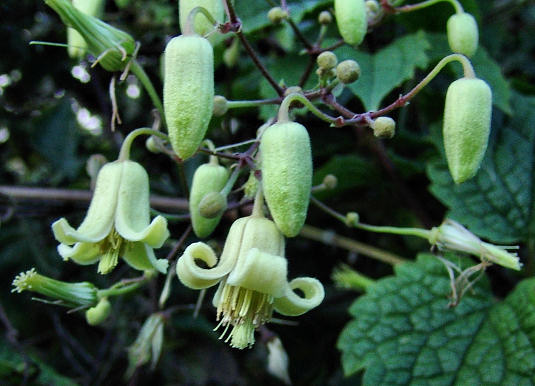 Clematis of the Month for April 2006

Section Connatae
Subsection Connatae
Distribution Throughout the Himalayas, Kashmir to Sikkim, Tibet and Bhutan
Flowering (July to October in the wild) but in our garden October to November
Habitat In forests and mountain slopes
First Recorded A. P. de Candolle in Prodromus 1824.
Distinguishing Features A vigorous plant, reaching up to 8 metres in the wild (4 metres in our garden) which produces a mass of small creamy yellow campanulate flowers for about 5 weeks from the first week in October generally, The seed heads are quite attractive and last well into mid winter. Its mid to bright green leaves are either ternate or pinnate. Its stems have enlarged nodes which form into a disc-like flange around its stem, the largest I have seen being up to 10mm in diameter.

The section Connatae is reasonably large and covers some 45 species over 2 continents, which cover central Africa, but the main distribution being in Asia, from India, Korea, Tibet, Nepal, Bhutan and China. 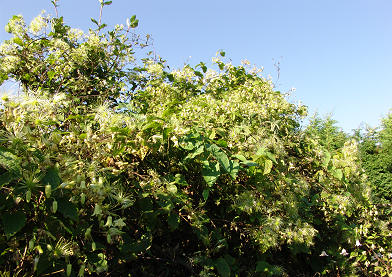 C. connata in flower in November 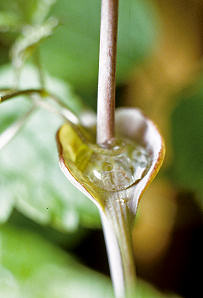 I first acquired a plant from Hugh Lee's nursery when on a British Clematis Society visit to Southern Ireland in September 1994. This plant was potted on from a 2 litre pot into a 4 litre one and kept in our cold greenhouse over winter. The plant flowered that Autumn and was subsequently planted out into the garden, to grow through a Garrya elliptica "James Roof". Unfortunately the winter was cold for us, with temperatures down to minus 12 degrees centigrade and the C. connata did not survive the winter.

In 1994 I was given some seeds of C. connata, collected from the wild by a friend who had visited China. These seeds germinated the following spring and several plants were grown on to flowering size. It was evident after flowering that the size of flowers varied considerably on different plants and unfortunately the plants with the largest flowers all had the smallest cones at the nodes. These plants subsequently proved to be hardy and the plant with the largest and most abundant flowers was planted adjacent to the Garrya with a view to add interest to a shrub that has little appeal to me in summer. This C. connata took four years to establish itself, being very slow in growth and having few flowers. The last few years have seen it flourish into a large healthy plant which will grow about 4 meters in one season if cut down to 500 mm above ground level in March of each year. Flowering usually starts in the first week of October and goes on until the first frosts of November. Its seed heads are usually quite attractive and last well into mid winter.

I have subsequently added another clematis to grow through the Garrya, this being C. 'Kaiu', which matches the vigorous growth of the C. connata, but flowers from the beginning of July to mid October.