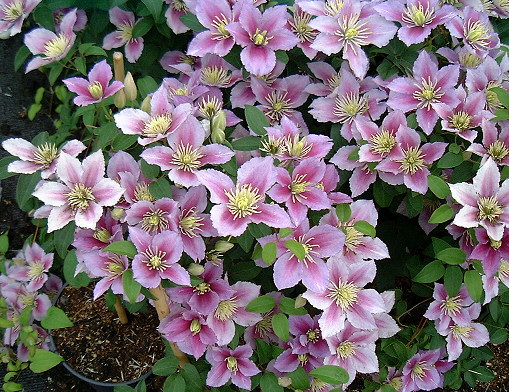 Clematis of the Month for May 2006

It's May and the time of year when, here in the U.K., I know that summer has arrived when the early large flowered hybrids burst into flower. Clematis 'Piilu' is one such herald of the arrival of summer although its first flowers usually occur more mid to late May than early May. Paradoxically it was bred as a late flowering clematis (more on this shortly) but is known in the milder climates of Western Europe and parts of the USA as an early large flowered hybrid. This is because in these climates, which are milder than those where it was bred, the wood that was made in the previous year is not cut down by the hard frosts and freezing conditions of their severe winters but will survive and allow the plant to flower on last year's wood. So 'Piilu' is a interesting clematis which can be grown as either a hard prune clematis or a large flowered early hybrid. Indeed the flowers that it offers us in May can be semi-double - as shown in the picture below right - or even fully double. 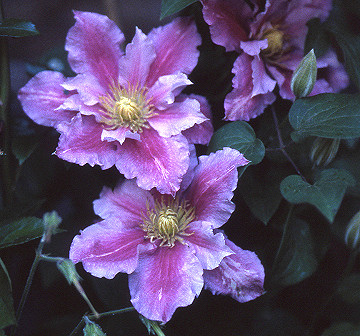 C. 'Pillu' features on our Recommended Clematis list as although it has been available for only a relatively short period of time, it was a hit as soon as it was first seen - initially within the northern European countries where its hardiness was appreciated and then within western Europe and the rest of the world. It is a compact plant, typically 1.5 meters (5 feet) maximum and is usually covered in an abundance of flower so it is suitable for growing in either in the ground or in a pot. The mass of flowers above was photographed at the clematis nursery of Jan van Zoest in The Netherlands during the visit to the Netherlands by this Society in 2003, where there was a "field" of C. 'Piilu'.

C. 'Piilu' (pronounced "pee-loo") means 'Little Duckling' in Estonian. It was raised in 1984, first flowered in 1987, named in 1988 and registered in 2000. The flower size is about 5-10 cm. It has 4 to 6 mauve-pink sepals with broad rose shading, paling towards the margins, the sepals have a textured surface with irregular white markings; they are broad, have 'frilly' margins and taper to rounded tips. The stamens are pale lemon. As described in the 1999 issue of our Journal "A very 'cute' flower"!

C. 'Piilu' was bred by the Estonian Clematis breeder, Uno Kivistik. From 1974 Uno Kivistik committed himself to Clematis. First he collected Clematis cultivars from the Baltics and the countries of the former Soviet Union. Then, with the help of his wife Aili, he started to cross different Clematis cultivars. Over the period of a quarter of century Uno and Aili raised more than 6,000 hybrid plants, selecting and naming about 140 of them. The work Uno did experimenting, propagating and disseminating hybrids was enormous.

Uno Kivistik set as the main goal of his breeding work low, early-blooming and frost-hardy varieties, flowering on the same year's wood (the late flowering hybrids). These are the vital features for the plants to survive in the harsh Nordic climate of long winters and short summers. Uno's success in raising such plants made his varieties popular in northern European countries: the Baltics, Finland, Scandinavia, and North West Russia. However since then, many of his clematis have become known and popular all over the world, in particular Germany, England, North America and Japan.

When the International Clematis Society visited Estonia in 1998 it was unfortunately only a month or so after Uno had died unexpectedly of a heart attack. We visited his grave and grieved for the early passing of a man who had given us so much, but must have had so much more to give to the world of Clematis. It was very fitting that on his gravestone was engraved a Clematis 'Piilu'.

Uno's son, Taavi, and Taavi's wife, Aime, along with Uno's wife, Aili, have continued with Uno's work at the family farm in Estonia. It is fitting to the memory of Uno that Clematis 'Piilu' also still remains the Clematis farm's logo. 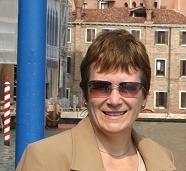