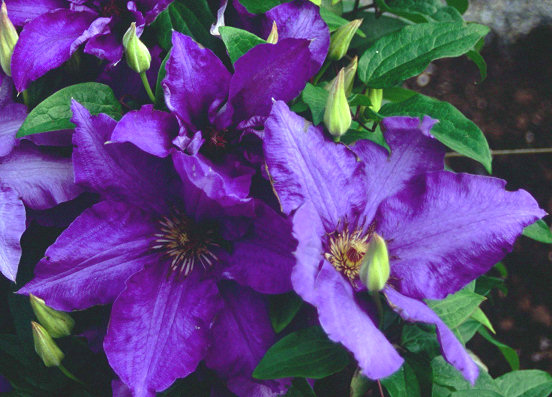 Clematis of the Month for July 2006

If the criteria for judging a clematis to be used in containers is its ability to bloom from the ground up, and a high number of blooms, which are produced over a long season, then surely Clematis 'Kirigamine' would win an Award of Garden Merit. It is one of a series developed by Sakata no Tane (Sakata Seed Company) at their Sankyo Research Station in 1984, for the Japanese floral trade. They introduced their "mountain series" (including 'Tateyama', 'Hodaka', 'Myookoo', and 'Shiga') as a group of plants to be sold with supports, but having shrubby lower growth, insuring the plants would be in bloom at the time of sale. From late May until the first hard frost, 'Kirigamine' can be relied upon to bloom in profusion at frequent intervals.

Although 'Kirigamine' is a place name, the Chinese characters that form the name suggest fog shrouded peaks, which are echoed in the flower's color. The six, or sometimes seven, sepals are a bright violet-blue, although flowers from buds developed during cool weather may have a misty central bar. In any weather the sepal edges are wavy, and sometimes can be frilly. The centers are detailed with white filaments carrying chocolate colored anthers (semi-sweet). Hiroshi Arakawa, in his notes in Clematis by Taizo Ino and Hisako Nakamura, suggests that the boss of stamens takes on a rayed appearance as the flower matures. Our observation is that as the anthers age and recede, the white filaments seem more pronounced against the vivid sepal color.

The flowers are typically six to seven inches wide. On a short plant like 'Kirigamine', the mass of flowers usually obscures the foliage, which is mid-green and durable. Removing spent flowers seems to hasten rebloom, but this practice is not strictly necessary: 'Kirigamine' wants to repeat. In the autumn, the flowers will be slightly smaller and slightly less ruffled, but still produced in great abundance.

Ironically, for a plant named after a mountain peak, 'Kirigamine' has a short stature. In the ground or in a container, 'Kirigamine' does not grow above five feet, and flowers from base to summit. We have grown it in full sun and part shade, and the plant is reliable in both exposures. The color has been perfectly sunproof, and is retained even by the sepals that have fallen to the ground.

The experience of walking in a garden heavily laden with clematis finds us looking up, but 'Kirigamine' draws the eye down, and we imagine, given its name, that we are flying over lofty peaks.