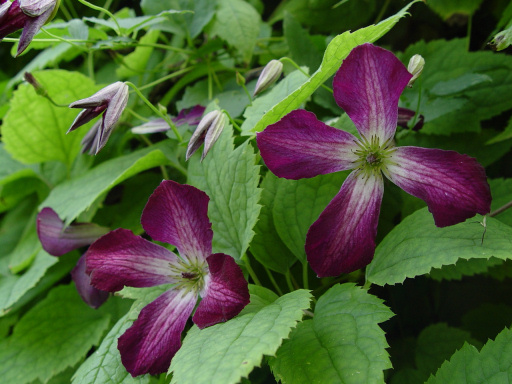 Clematis of the Month for August 2006 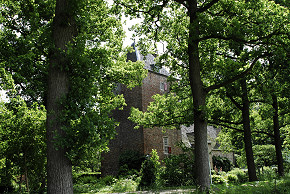 This beautiful viticella cultivar was found in the garden of an old castle, 'Walenburg', by D. M. van Gelderen and introduced in 1990. This little castle is situated in Langbroek, in the neighbourhood of Wijk bij Duurstede in the middle of the Netherlands. The history of the castle started in 1260 and the tower was rebuilt in 1300. It is one of the oldest castles in Holland and the castle used to be much bigger than it is now. Not much is known about the history of the castle. 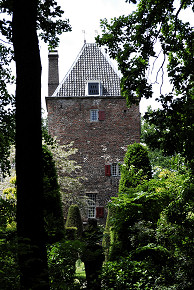 At present, the tower is inhabited by a family and there is no possibility to visit the castle. So I have been unable to discover whether the mother plant still exists in the walled garden. Clematis 'Walenburg' forms part of the national collection of viticella cultivars in the UK.

Like species C. viticella and most of the small-flowered cultivars/hybrids, C. 'Walenburg' flowers on the new wood. The plant starts flowering in midsummer. The flowers are borne in terminal sets of three and further down the stem, in pairs. The flowers themselves are very eye-catching and need a closer inspection. The flowers start as hanging buds and open later as hanging bells, but if the flowers open completely, they turn upright so that you look into them. The species itself only has hanging bells but this cultivar has hanging bells and later open flowers of about 8 cm in diameter. 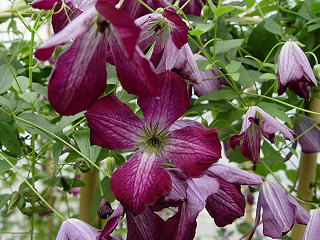 The four sepals have no more than three colours together with a pink reverse side. The interior of the sepal is white and the small central tuft of stamens a light green, but what adds life to the flower is the vividly contrasting dark colour of the margins and veins. Normally these are bright red-purple, though the shade will vary. But they are much deeper than those of another two-toned viticella cultivar often paired with it in gardener's minds, 'Minuet'.

'Walenburg' is, again like most of the other well-known viticella cultivars, easy to use in a variety of ways in the garden. A vigorous climber to 2-4 meters (up to twelve feet), it adapts readily to fences, trellises, and tall hosts, or is quite willing to trail freely down a bank or wall, or can even be grown as a groundcover. It makes a beautiful combination with other plants and shrubs in the garden, and can give something special to the garden when combined with a (climbing) rose, for example with the yellow rose 'China Town'. In combination with a light green shrub it is also very nice because the beautiful flowers contrast well with the leaves of the shrub.

Gardeners looking on as its stems shoot up into a tree or spread out in a tall shrub need not fear it will be hard to disentangle later on because in late autumn or winter it can be easily pruned by cutting the stems. The pruning can be finished as is customary with new-wood (Group C or 3) plants, cutting back all the stems to pairs of strong buds near the ground. The next season the plant starts with growing from this point or from the ground.

This is one of the most beautiful viticella cultivar and is becoming more available in different countries. It is a very good companion to the other viticella cultivars/hybrids. Following the trend towards more and more smaller clematis, this cultivar is an excellent choice.