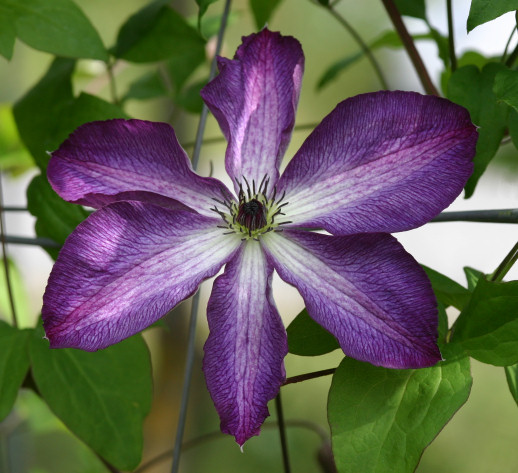 Clematis of the Month for December 2006

We can grow a clematis for a long time and still not have uncovered all of its mysteries. In 2004, a group of knowledgeable clematarians gathered in Cambridge for the I.Cl.S. annual conference, and attended a workshop conducted by Wim Snoeijer. Wim had placed botanical and live specimens throughout a classroom, and provided us with a key to use to identify the clematis on hand, by their groups. Almost everyone who encountered Clematis 'Venosa Violacea' was stumped. We were thwarted by our previous assumptions of the plant. We had been trained by years of acquaintance with clematis to regard 'Venosa Violacea' as a C. viticella hybrid, and doggedly attempted to justify it as such, with a total lack of objectivity.

In fact, careful observation and closer attention to Wim's key revealed an equally close affinity with C. florida. By following the key we had to admit that yes, the flowers are up-facing and not nodding as other viticella selections are. Also, the flowers are produced from axillary buds, on young shoots that keep growing as the lower blossoms open, and in Wim's key, this indicates membership in the florida group. How often do we look at a plant and not really see it?

Next the workshop examined the flowers more closely, and realized how much the dark stamens of 'Venosa Violacea' resemble the centers of Clematis florida. 'Venosa Violacea' does indeed carry itself more like a large-flowered hybrid than the other viticellas do (blossoms 4 to 5 inches wide). The sepals unfurl in a canoe-like shape, before flattening and developing its unique veined coloration. The base color is white, shaded by the violet veins which merge into a purple outline at the sepal edges. The width and contrast of the outline vary with temperature and light. Sometimes the white is pronounced. In other flowers, even on the same plant, the veining infiltrates the white. But there is never any mistaking the identity of these flowers. There is no other clematis like it.

Although Clematis florida can be fussy and delicate, 'Venosa Violacea' gains its vigor from its C. viticella parent, with vines growing 10 to 12 feet a year. The bloom time can begin as early as late May and this first wave can last six weeks. Even without deadheading, the plant will come back into bloom later in the summer, if the growing season permits. This clematis is normally hard-pruned in mid-to-late winter.

'Venosa Violacea' was introduced in 1883 by Lemoine et fils of France, who according to record, crossed Clematis viticella with an earlier hybrid between C. viticella and C. florida. Thanks to Wim, and the other participants of this highly educational workshop, we have, much to our surprise, developed a new appreciation for this old friend.

Editor's note:- in spite of the text above I have, for the moment, placed this Clematis of the Month description within the category "viticella", which is how it is classified in The International Clematis Register and Checklist 2002