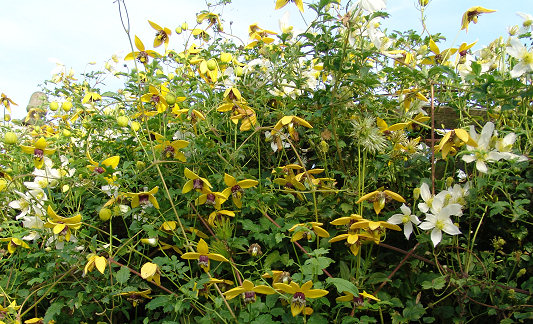 Clematis of the Month for January 2007

This plant was the winner of the British Clematis Society "Certificate of Merit" in 1999, but previously had also received an Award of Merit and a First Class Certificate from the Royal Boskoop Horticultural Society in Holland.

I quote the late John Maskelyne, at the time, the Trial Ground Coordinator and a former Chairman of the British Clematis Society (BCS Journal 1999) - "Imagine, if you will, a confection of bright yellow open flowers and fresh green foliage with silvery seed-heads and you have Clematis 'Kugotia' (tangutica group), Trade name; Clematis GOLDEN TIARA. The growth of this plant has been exceptional as has its health. The combination of flowers and seed heads against a background of fresh green foliage has been eye-catching". Truly an endorsement of a wonderful clematis. 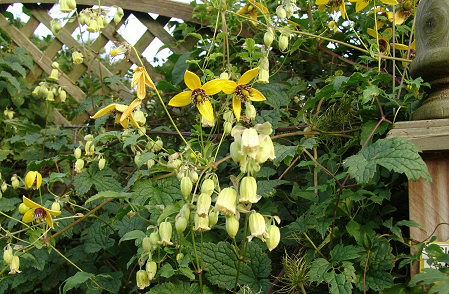 We planted C. 'Kugotia' GOLDEN TIARA® in our garden in 2002 partly on this recommendation but also because we wanted another clematis to compliment C. 'Anita' and C. rehderiana. This area of the garden has been brightened up considerably in Autumn by the addition of C. 'Kugotia' GOLDEN TIARA® , with the silvery plumes of the seed heads lasting until the early spring pruning session.

This year we had the fortune to observe the particularly striking combination of C. 'Kugotia' GOLDEN TIARA® flowering with C. fusca (possibly var. kamtschatica). An accidental combination, because our C. fusca usually flowers in May/June, which it did as usual, but then came the really hot dry spell of weather which really decimated the plant. It is growing in a pot (as I cannot grow it in our very alkaline soil) so I cut the fusca down to compost level re-potted it and put in the shade adjacent to the C. 'Kugotia' GOLDEN TIARA® . In September we were surprised to see the combination shown below. 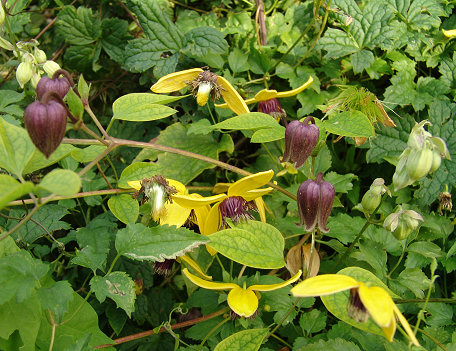