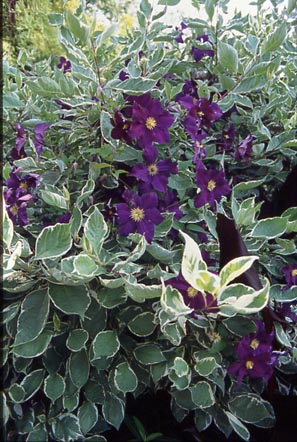 Clematis of the Month for March 2007

In 1998, the International Clematis Society visited Sweden and Estonia. The Estonian visit was particularly memorable because the prolific clematis breeder Uno Kivistik had recently died, and we were scheduled to visit his farm, Roogoja, in Harjumaa to pay our respects. No one who visited the garden that day will forget the feeling of wonder as we viewed for the first time countless fascinating yet unfamiliar hybrids. It was as if we had walked into an art gallery of secret masterpieces.

Among the treasures seen that day, the memory of C. 'Viola' has never faded. If we were to compare it to a work of art, it surely would be a Rubens. The flower is a voluptuous cup formed by five or six fleshy sepals, which curve and expand as they age (to 15 cm wide). Adding to the sense of lushness is the velvety color, a royal purple fit for the robe of a king. The impression is made stronger still by the sheer volume of bloom, produced over a long season.

In sunlight, the luminous sheen of the sepal surface of 'Viola' reflects light back at the admirer. (These flowers don't seem as dark as those of another popular Kivistik hybrid, 'Romantika', which has a light-absorbing matte surface. Both flowers are difficult to photograph because of these opposite qualities.) Further enlivening the uniform purple of 'Viola's' sepals are the creamy green filaments and pale yellow anthers. The deep and even color, the curvaceous shape, and the abundance of bloom make this cultivar distinct from all other clematis. 'Viola' is unmistakable.

The hybridizing aims of Uno and his wife Alli were to create clematis that do not grow too tall, that can be hard pruned in autumn, and that are cold-hardy enough to survive Estonian winters (zone 3-4). In our more temperate climate, 'Viola' is a tall plant, even when cut back hard it will reach ten feet easily before blooming on new wood. Surprisingly, as was discovered through carelessness, unpruned plants will flower in the spring, rather than summer, and can be pruned immediately after flowering, to produce a second, late summer-to-autumn flush. These will be the equal in quality to the spring blossoms, but there may be fewer of them. This is a handy thing to know if you are considering combinations with other plants.

For example, in the garden of Ernie and Marietta O'Byrne in Eugene, Oregon, 'Viola' is allowed to run through Cornus sanguineum 'Variegata', magnifying the beauty of both plants. Of course, any large variegated cornus would do. 'Viola' is also effective with golden-foliaged shrubs, such as Philadelphus coronaria 'Aureus'. If you forget the autumn pruning and allow 'Viola' to bloom in spring, combine it with a fully double old garden rose to create a "Dutch Masters" still-life effect in the garden. In the summer, a hydrangea would give this same impression.

We seem to be describing a perfect plant with perfect flowers, but we must admit a flaw. Here in the Pacific Northwest, we don't allow the seedheads to develop because in the last few days of each bloom cycle, the long-lasting blossoms are marred by spots of powdery mildew. Our solution is to cut the plant back-to whatever degree desired-fertilize, and encourage 'Viola' to rebloom as quickly as it can.

A synonym of 'Viola' is C. viticella 'Viola', and it does show the influence of Clematis viticella in the nodding buds. However, when these buds open, they clearly reveal large flowers. It at this point that another attraction of 'Viola' becomes apparent. Even though 'Viola' can grow tall, its flowers are always visible because, like artist's models striking a poses, they face outward, meeting the viewer eye to eye.