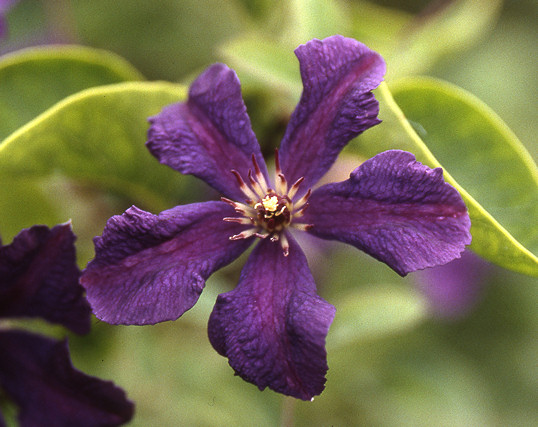 Clematis of the Month for April 2007

Clematis are often named for someone close to the breeder or an important contemporary. More recently names have been chosen for marketing appeal, an attempt to capture the buyer's interest. The name of Clematis 'Polish Spirit' captures both the breeder's identity and the essence of this free flowering vine.

Brother Stefan Franczak is a Jesuit monk who has been gardening in a Warsaw monastery since 1960. He is well known now for his many fabulous introductions. However, while Poland was under the control of the Soviet Union, little was known of Brother Stefan's creations. In the summer of 1984, Raymond Evison of The Guernsey Clematis Nursery Ltd. while visiting in Warsaw was taken to Brother Stefan's garden. Evison noticed a seedling plant growing on a fence. Even though it was quite floriferous, Brother Stefan foresaw no commercial value. He preferred large flowered cultivars. Evison however recognized the potential in this little beauty. Brother Stefan generously gave him a plant to develop. Evison introduced it as C. 'Polish Spirit' to the world in 1990. Evison states that with Brother Stefan's agreement he named it Polish Spirit. During his 1984 visit to Poland he became so impressed by the spirit of the Polish people. After the many difficulties they had been through since the last war and what they were achieving in their lives - that's Polish spirit.

In only three years after its introduction, C. 'Polish Spirit' was given the RHS Award of Garden Merit in 1993. It is currently on the International Clematis Society Recommended Clematis list. Since the exact parentage of C. 'Polish Spirit' is unknown, there has been much speculation as to whether it belongs to the viticellas or the Jackmanii group. In fact John Howells, the esteemed clematarian, has given C. 'Polish Spirit' the honor of being featured in his book 'Trouble Free Clematis The Viticellas'. The equally knowledgeable Victoria Mathews classifies it in the Late Large-flowered group. Regardless of its classification, Raymond Evison clearly states, "It proved to be a very good commercial clematis and is now widely grown around the world." 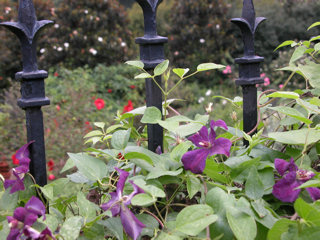 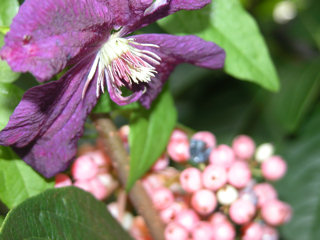 This is an extremely vigorous vine with a healthy robust presentation. It is not suitable for containers or trailing through a perennial bed. It is an excellent selection for growing on walls or with sturdy climbing roses. C. 'Polish Spirit' will be a star in an autumn garden especially with golden conifers or shrubs with golden leaves. My favorite combinations in my garden are with Viburnums or deciduous hollies. It will bloom June through October but in more moderate climates June through September. In hot climates like Atlanta it will start blooming in April. All of this vigorous growth should be pruned off when the plant goes dormant. The many blooms will return the next year on the new growth, which can reach, to 15' (5 metres) in a single season of growth. 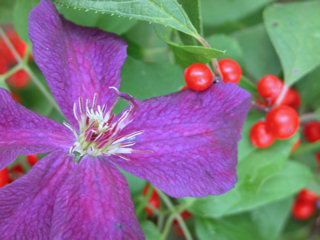 We are grateful to Brother Stefan for choosing to highlight clematis in his monastery garden and to Raymond Evison for recognizing the potential of C. 'Polish Spirit' as clematis for all ages and all gardens. For further information go to the website of Szczepan Marczyñski's nursery at www.clematis.com.pl/en/. He has written an interesting biography about Brother Stephan including a thorough discussion of his many clematis introductions. Be sure to scroll down to the end of the article to the picture of the memorable meeting in 1984 between a much younger Brother and Raymond Evison. This website also includes a great encyclopedia on many clematis which can be searched by numerous categories. 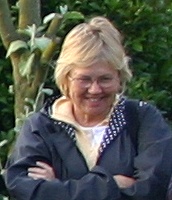