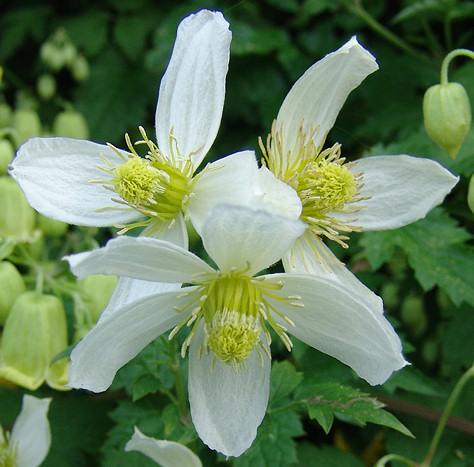 Clematis of the Month for May 2007

After reading an account about the parentage of C. 'Anita' in the British Clematis Society journal of 1992, we first saw this plant in flower on a visit to Boskoop, Holland in 1993, where we purchased a plant (amongst a few other cultivars). On our return C. 'Anita' was planted at the end of a Leylandii hedge where if gradually developed into a strong and very free flowering plant. The Leylandii hedge is no more, as it was removed about three years ago. C. 'Anita' was dug up at this time and moved further down the garden to a place where the hedge had been removed two years earlier. 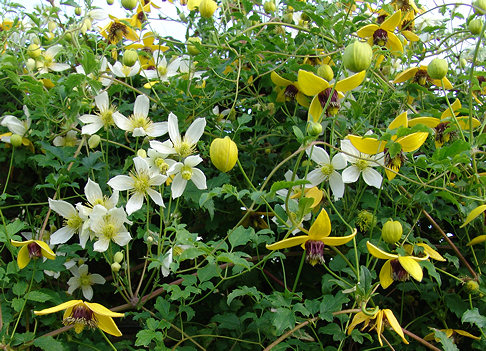 Since being moved it has continued to thrive. After a period on its own, firstly competing with a Leylandii hedge, it now has a few companions which adds to the appeal of the plant. Firstly a C. rehderiana was planted adjacent to 'Anita' followed by C. 'Kugotia' GOLDEN TIARA and C. 'Walsenburg' (which has usually finished flowering before the three previously mentioned clematis). C. 'Anita' usually flowers (for us) late August into October. It has white, 4 to 6 sepalled flowers, only about 4 cm. across with quite prominent yellow anthers, and grows to about 4 metres in our garden, but can reach up to 6 metres.

Grown on its own, it is not a particularly spectacular plant, but when combined with other clematis with the same flowering period (especially if the combination includes clematis with yellow sepals) it makes a quite spectacular display. 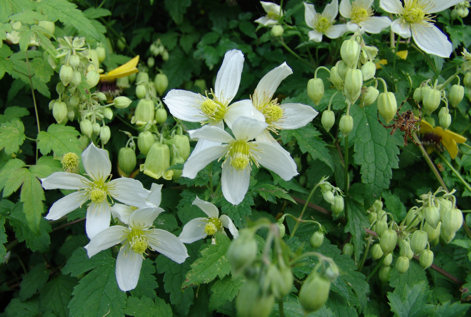