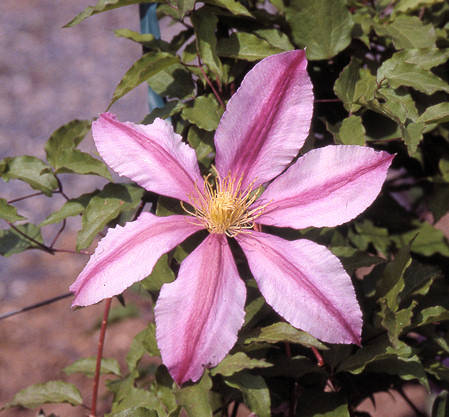 Clematis of the Month for June 2007

Of all of the many color forms of large-flowered hybrid clematis, it was the pale bi-colored forms that had interested us the least when we were new to the genus. The "Nelly Moser-types" are often badly placed in gardens, usually in too much sun, where the flowers not only fade, but have little longevity. We did not believe these to be particularly garden-worthy plants. All of our prejudices changed when we met 'Nadezhda'.

This Ukrainian introduction from 1965 did not reach western commerce until the mid-to-late 1990s. It was one of many lovely cultivars developed by Prof. Maria Beskaravainaya from the Nikitsky Botanic Garden which came into the trade in the West after the Berlin Wall came tumbling down.

When compared with its 'Nelly Moser' parent, 'Nadezhda' has a more vivid central bar on a brighter background. These more intense colors are sunfast, so the plant can be grown in open exposures without fear of insipid fading. The crisp over-lapping tepals of 'Nelly Moser' can have wavy edges, while 'Nadezhda' seems more rounded because the tepals tend to curve under along the edges, and can be gappy. This gives an overall softer appearance. 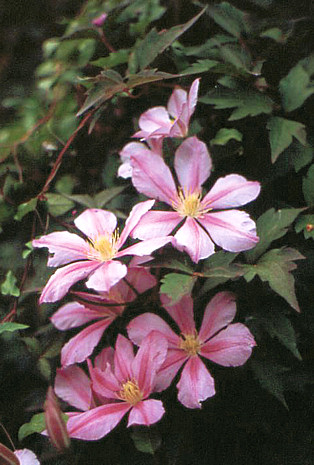 The early spring bloom is prolific and prolonged, although the earliest blossoms, if matured in cool weather, can show an unusual gray tone in the base color. This color heats up with the weather. In the autumn, the production of flowers is extended until the frost. Because the tepals retain their color long after the stamens have shriveled, the flowers hold for an extraordinarily long time. Conveniently, the tepals seem to fall all at once. Truly these flowers don't show their age.

In our experience, unlike some other large-flowered hybrids, 'Nadezhda' is precocious, reaching its mature height of up to 3 meters (9 feet) and an impressive breadth of 2 meters, at a young age. Because the growth is reliably broad, the overall habit seems uncongested, and the petioles are not excessively grasping. This makes winter clean-up much more simple. Even if you have to hard prune this plant at the end of the winter, it will still provide you with an undiminished spring display. We recommend this large plant for the garden, and not for containers.

In the end, it was the brilliant contrast of the raspberry bar against the cotton-candy tepals, produced in continuing profusion, that overcame our resistance to a group we had been willing to dismiss. We were converted. The word "nadezhda" means hope. For gardeners who have lost faith in the Nelly Moser-types, we think 'Nadezhda' will bring you hope.