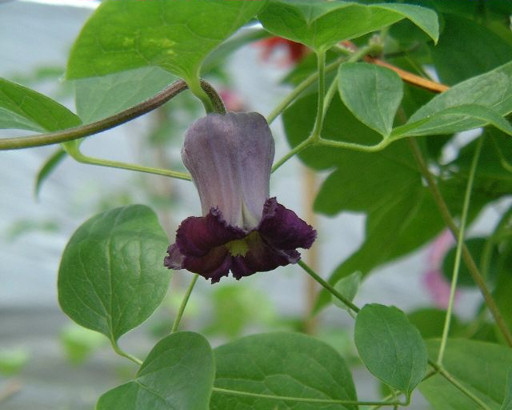 Clematis of the Month for July 2007

Leaves, mid to dark green, net veined, usually in three to five pairs, simple to deeply lobed, or in threes. 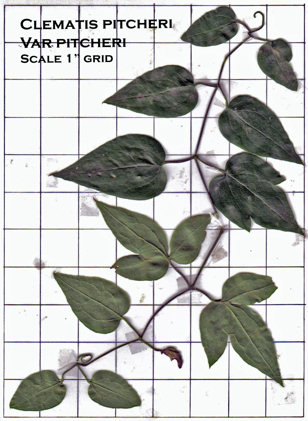 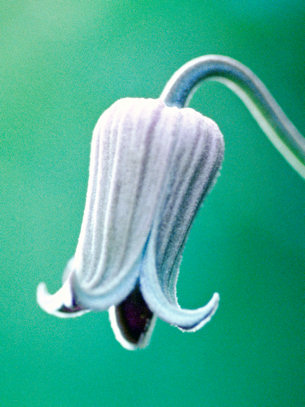 Flowers, leathery, nodding, bell shaped flowers with four ribbed tepals re-curved at the tips (but generally not as much as in C. crispa), inside of tepals usually darker than the outside. Colour varies from red, claret, through purple to reddish tinged green. The flowers have numerous stamens, with a few stigma's in the centre, these usually protrude beyond the tepals of the fully opened flower. Buds pointed, egg-shaped, bourn on long stems.

Habit, herbaceous to semi herbaceous, but is fully herbaceous in our garden. climbing to 2.500 m. 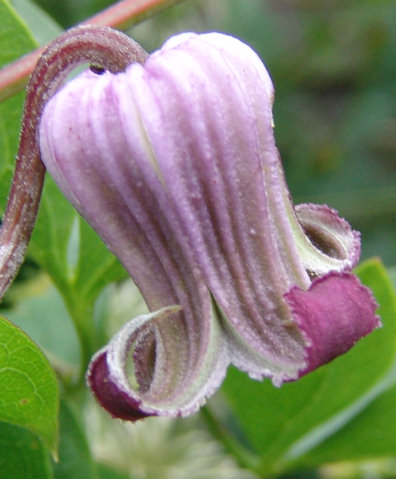 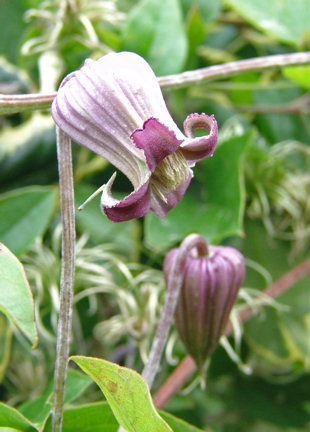 CultivationC. pitcheri seems to thrive in our well drained alkaline soil, but it has failed in the rich, moisture retentive soils of our previous garden. Do not plant deeply, but ensure that the herbaceous crown is at just below ground level, keep the plant mulched with well rotted compost in spring and autumn, water well after planting, preferably in late spring. Being herbaceous it only needs to be pruned down to ground level in late winter. For the best effect grow through a shrub of about 2.000m high, our plant is growing through a variegated Holly and adds interest to the Holly in late summer.

As with virtually all the Viorna Section C. pitcheri is prone to mildew, but in our garden it is free of this disease most years. Also it flowers much more freely during sunny and dry conditions, this year when most clematis have suffered in our hot dry summer, pitcheri has flowered about a month earlier than normal and has blessed us with more flowers as well.

There seems to be tremendous variation in cultivated forms of pitcheri, as with most of the Viorna Section there is generally a difficulty in propagating plants from cuttings, therefore there has been a tendency to offer plants from cultivated seed stocks. The Viorna Section can be tremendously promiscuous and there is a chance that some plants offered could be hybrids, but there is always a chance of coming across a gem.