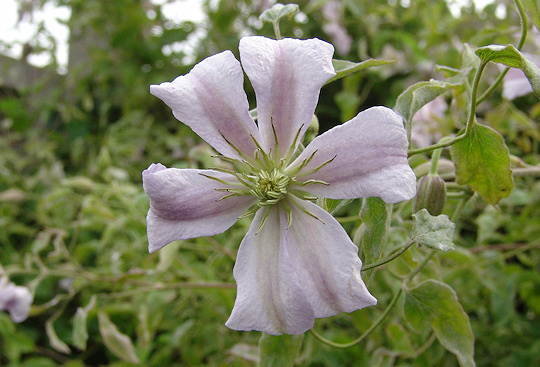 Clematis of the Month for January 2008

It was inevitable that Clematis 'Vanessa' would end up in our garden (pictured above in mid October), as it is linked to a series of associations from which lasting friendships have grown. The first link being with Vince and Silvia Denny who crossed C. 'Sandra Denny' with C. 'Perle d'Azur' to produce a pale violet clematis which was named C. 'Vanessa' at one of many visits by them to Mike Browns' abode and was registered in 1983. This plant was named after our friends, Cavan and Josie Hulbert's daughter Vanessa.

'Vanessa' (the Clematis) was first seen growing in the Hulberts garden in the Black Country, where it was flourishing. It certainly made an impact on me. Why? Well, despite the flowers not being very large and despite being yet another light violet clematis, it has two redeeming features. One being its strong, robust growth and free flowering.The other being that it waits until most of the late flowering Viticella types are coming to the end of their flowering period, by which time it is a mass of flowers and goes on to flower until cut back by the first frosts of winter. 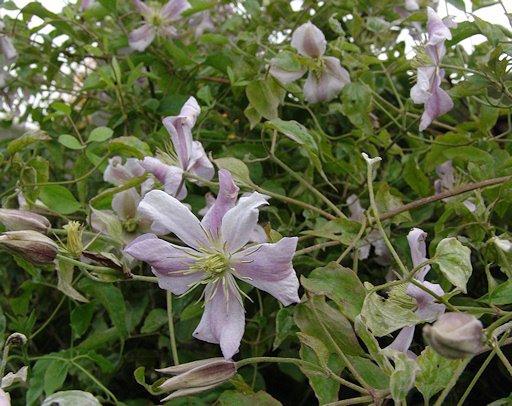 Clematis 'Vanessa' first came into my possession in 1999 as a cutting propagated by my friend Bernard Allen, being part of the swapping of plants that goes on amongst gardeners. I am not sure how Bernard became involved, but it is possible that some not so gentle hints were dropped, or in negotiations involving a plant that I had that Bernard wanted. 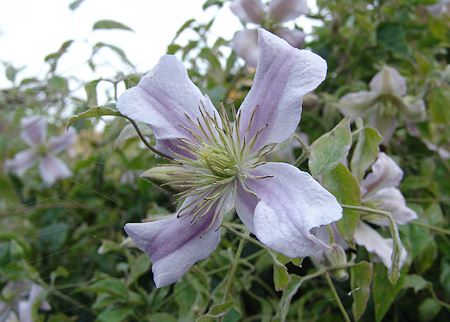 C. 'Vanessa' is planted in our garden against a fence, facing west, it shares a position between C. 'Rooguchi' and C. 'Polish Spirit'. There is no colour mismatch between these plants because C. 'Vanessa' does not start to flower until late August by which time the others have finished blooming and continues to flower until cut back by the first frosts of winter. This year (2007) it was still in flower at the end of November.

Certainly C. 'Vanessa' is an easy plant to grow, having all the characteristics of the best group three (late flowering) clematis rivalling C. 'Étoile Violette' for ease of cultivation, but of course flowering much later.

Editor's Note: To complete Roy's description of Clematis 'Vanessa', I give you the real Vanessa Hulbert, shown here at the top of Mount Kasprowy Wierch in the Tatra mountains during our visit to Poland in 2002. 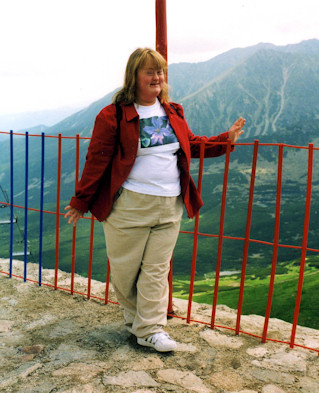