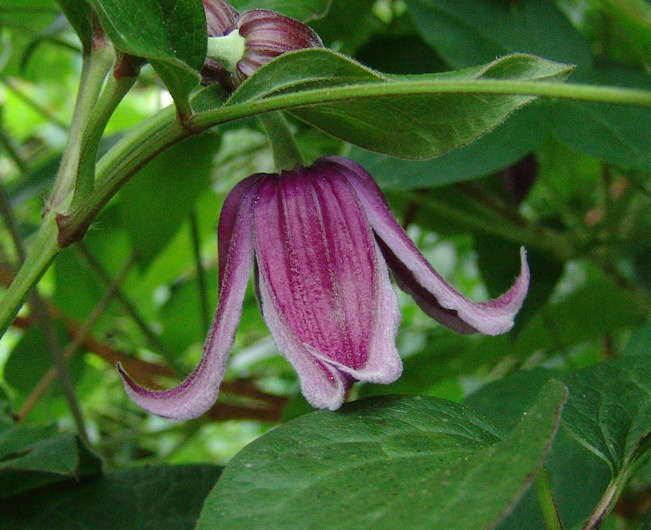 Clematis of the Month for February 2008

I first met Jan Fopma (the person) on a visit to Boskoop in August 1993 organized by the British Clematis Society (BCS). As part of the visit we were greeted by the Fopma's, were feasted and given a guided tour of their Clematis nursery and his collection of Clematis, being a show garden and trial area for new introductions.

The first possible sighting of Jan Fopma (the clematis) did not occur until seven years later, at an I.Cl.S. meeting in Germany, where Wim Snoeijer had set up a display of flowers of new and possible introductions from his breeding program, which was started by Jan Fopma and continued with the new nursery owner J. van Zoest. Amongst the display were a number of bell shaped flowered clematis including C. 'Fascination', but one of the unnamed Clematis may well have been C. 'Jan Fopma'.

In the summer of 2004 on another I.Cl.S trip to Boskoop, Holland, we again visited the nursery of J. Van Zoest, where we viewed rows of clematis with bell shaped reddish purple flowers, at this stage unnamed, but a year later was named C. 'Jan Fopma'. My wife Angela may have had some influence in the naming of this plant, when discussing with Wim Snoeijer, she suggested that it should be named after Jan Fopma, as it had been produced from plants in his collection.

C. 'Jan Fopma' is placed in the integrifoliae group, but its parentage has not been disclosed. In our garden it is semi-herbaceous, with some stems producing new growth from above ground in early spring, but equally as many stem coming up from its herbaceous crown. It climbs to about 2 metres high and flowers mainly at the top of this growth, its flowers being 50mm across, in the form of open bells, glossy red-purple on the outside and darker purple on the inside. Flowering late June through to August.

This year (2007) on yet another I.Cl.S trip this time to Sweden, we were fortunate to see C. 'Jan Fopma' growing on a fence in the front garden of Jan Lindmark, where it was in full bloom, in August and glowing ruby red in the sunlight.

Editor's Note: Having read Roy's enthusiastic description of C. 'Jan Fopma', I though it fitting to see the man himself, shown here when the Society visited the Clematis Nursery of J. van Zoest in 2003. Jan Fopma is in the centre, with Wim Snoeijer and Jan van Zoest to the left of the picture, and Klaus Körber and Ria Stockmann to the right. 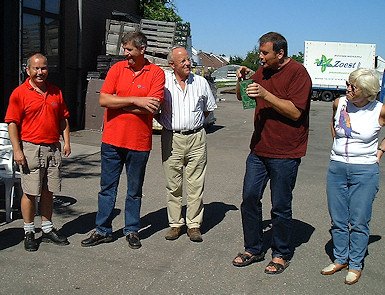