Clematis of the Month for August 2008

This small flowered clematis was described by C.P. Thunberg in 1784 in "Flora Japonica 240". 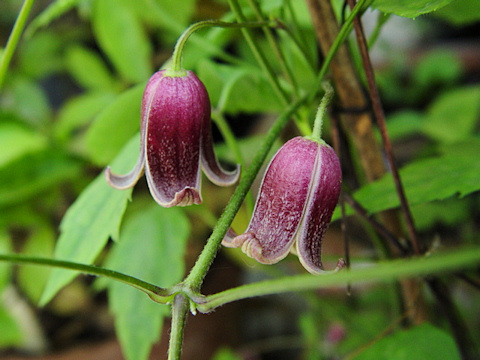 This small species grows very good in a sheltered position in sun or partial shade. The condition in winter is as follows:- not too wet nor too cold. I had the plant for years in my garden but suddenly, after a wet and rather cold winter, I lost it.

It is more an interesting species rather than a real garden plant, but if you do not know the plant, it seems as much a curiosity.

The beautiful dark little flowers are born from the axils of the previous year's shoots, although they are mostly hidden behind the leaves.

The flowers are nodding, cylindrical to narrow campanulate. Size is 2.5 - 3 cms long and 1.2 - 1.5 cms wide. Color is mostly brownish purple red though in Japan I have seen a very light one.

The leaves are rather attractive due to their dark color, size and form: ovate to elliptic and 5 - 8 cms long and 2 - 4 cms wide.

The best place in the garden is in front of a border so that you can see the flowers. You also can use the plant through shrubs, where the flowers will also be are visible.

Pruning is only needed if the plant is too big for its location. 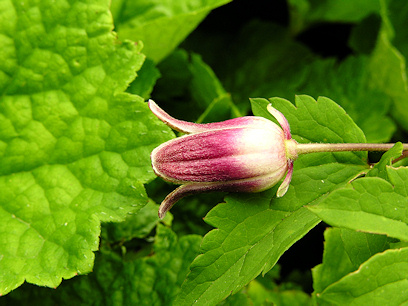 Sometimes Clematis obvallata is sometimes wrongly identified as C. japonica but there is a significant difference between them. As you can see in the photo to the right, C. obvallata has bracteoles situated immediately below the flower and usually surrounding the flower bud. 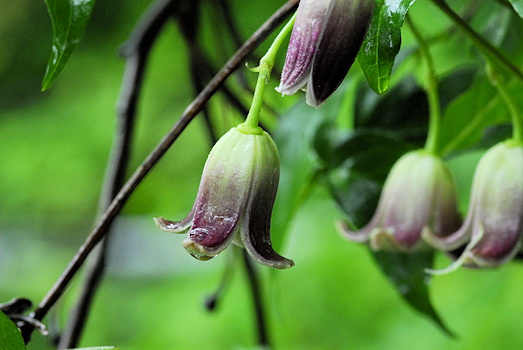 During our I.Cl.S. visit in Japan in 2008 I saw a very pale Clematis japonica in the nursery of Mr Yamaguchi. His plant had a lot of flowers and they were all very visible, whereas I have only seen plants with flowers almost hidden behind the leaves.