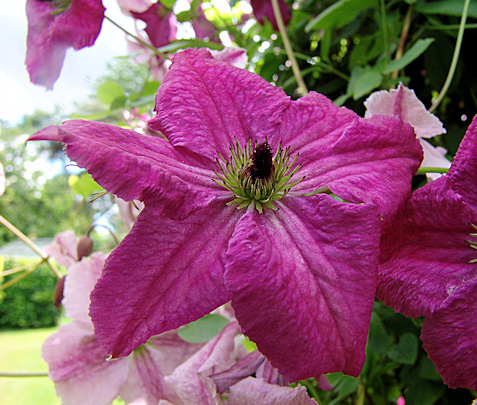 Clematis of the Month for February 2009 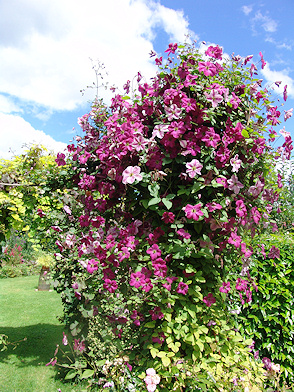 Clematis 'Carmencita' was propagated by Magnus Johnson in Sweden in 1952 from seed obtained from C. 'Grandiflora Sanguinea' (Viticella Group). It is interesting to note that C. 'Södertälje' also came from this seed. C. 'Carmencita' was brought on to the market in 1960. This clematis obviously gets its name from its garnet coloured flowers with green filaments, centered with anthers forming a dark purple/violet eye, synonymous with the dark eyed Spanish beauties (taken from the operetta 'Carmen', or possibly from the carmine tint to its tepals).The flowers of C. 'Carmencita' resemble C. 'Kermesina' but have a deeper carmine tinge which can be flattered by giving the plant a sunny position.

C. 'Carmencita' is a Group Three clematis and exhibits the normal growth characteristics of the viticellas, being vigorous in growth (3 to 3.5m) and also resistant to most pests and diseases. The flowers are 6 - 10 cm diameter and it has a long flowering period, from July to October. It is a very floriferous cultivar and therefore very useful in the garden.

In late winter the stems should be cut down to 30 cm above ground level. This will keep your plant to a good size in the garden and ensure lots of flowers.

C. 'Carmencita' is useful to plant against an obelisk, pergola, medium sized trees or large shrubs. It is also possible to combine this colour with many roses but the roses should be of a similar size. 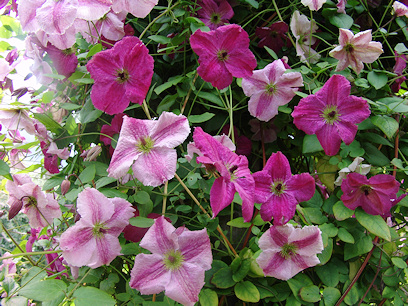 At the moment we are not growing this clematis in our garden but saw a wonderful example of C. 'Carmencita' growing in a friends garden in Horningsea, a village on the outskirts of Cambridge only two miles from our house. We have also seen C. 'Carmencita' flowering well in most of the Baltic countries as well as in Europe. 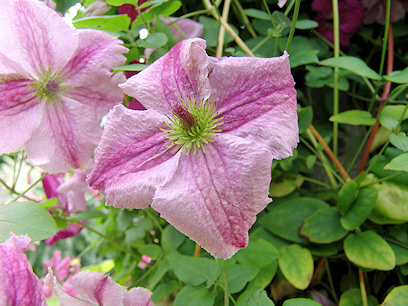 The interesting point about the plant growing in our friends garden was that it was growing in combination with another clematis that we could not put a name to, but a combination that was well worth copying. After a great deal of research and deliberation our conclusion was that the other clematis must be either a sport or a seedling of C. 'Carmencita'. Although the plants tepals are a much lighter shade than the original clematis, it has exactly the same shape and the central boss matches C. 'Carmenicita'. A truly great combination but one that cannot be recreated until we take some cuttings next year.