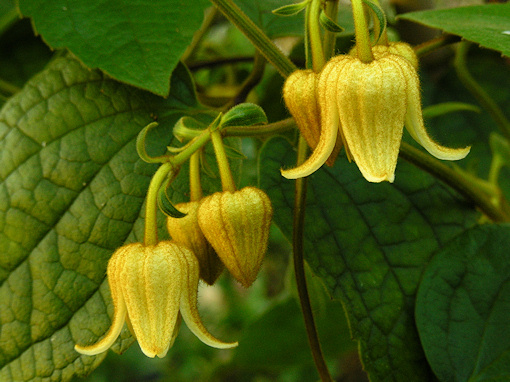 Clematis of the Month for March 2009

Section: Connatae
Subsection: Connatae
Distribution: S. and S.E. China, Hainan, Vietnam, Taiwan, Liu-Kiu Islands, North-Luzon, Mindanao, Sumatra, Banka, Java, Bali, and Lombok.
Flowering: In the wild from December to January - in my greenhouse in Holland from January to March. No results outside in Holland.
Habitat: In well lit locations in primaeval forests, in young forest, in forest edges and shrubbery, 500-3000 m elevation. Makoto Iijima has also found it in the Okinawa region of Japan.
First Recorded: A.P. de Candolle in System Naturale 1:151, 1818 and in Prodromus 1:6, 1824.
First in cultivation: Unknown but I had my first plants in 2005 in cultivation from China.
Named for: Jean Baptiste Louis Theodore Leschenault de la Tour, 19th century French botanist and traveller; also spelt "lechenaultiana". 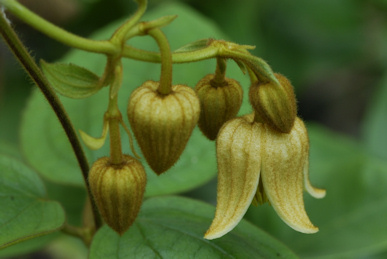 The flowers of Clematis leschenaultiana are nodding, bell-shaped, yellow (or greenish-yellow) in colour and covered in brown or golden hairs on the outside of the tepals. The flowers are normally in panicles with up to 7, occasionally up to 15, flowers. The flowers have 4 tepals which are 20-30 mm long, 0.5-1 cm wide and roll back at the tip. You should place the plant in the garden/greenhouse so that the flowers can be observed. The buds are rather bulky. 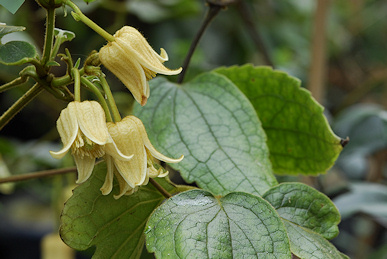 The leaves are ternate, papery but sometimes elliptic to ovate and even 2-3 lobed. The leaves are typically yellow green and therefore very easy to determinate. No other clematis has leaves with this yellow color. Older plants have leaves 60-110 mm long.

The stems grow to 3-8 meters but in containers normally only 2-5 meters. 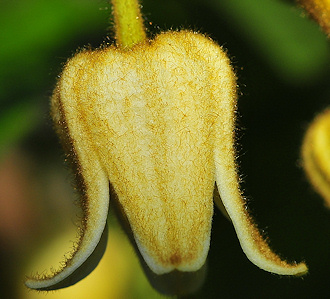 The plant prefers acid, neutral and basic (alkaline) soils. It can grow in full sun or in semi-shade (light woodland). Place the plant in full sun in Western Europe where the temperature is not too low in winter otherwise you do not get flowers. There are no results about flowers in Western Europe when planted outside. It requires not too moist soil during the summer and in winter the soil must be rather dry, otherwise you will loose the plant. In Holland the plant has been outside during a Winter until -7 degrees Celsius without any problems. 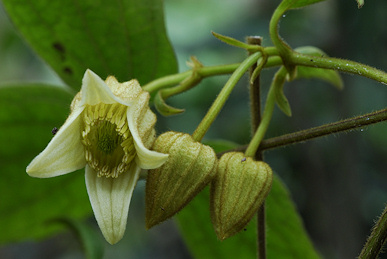 I have 2 types of this species, one with an open flower (see left) and the other with a closed flower. This species gives difficult fertile seeds because the flower has such a lot of nectar that after touching the flower the nectar makes the pollen complete wet. No other clematis has so much nectar. Before opening the flower you should turn the flower upside down so that you can collect pollen.