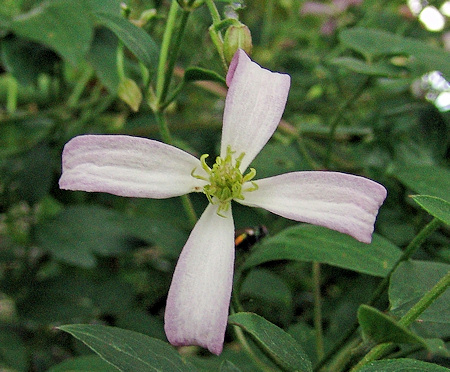 Clematis of the Month for April 2009 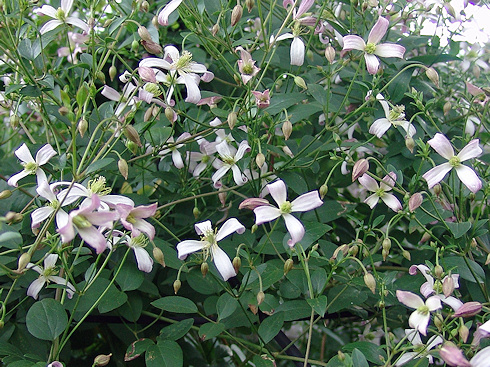 This herbaceous clematis is very similar to C. × triternata 'Rubromarginata' in habit and flowering, but it seems to be less vigorous and has 25 to 35mm white flowers with a blue tinge to its tepals. The flowers are scented, star-shaped and with yellow anthers and the tip is strongly recurved.

The leaves are rather small in relation to C. × triternata .

The plant grows to a length of 7 meters but by pruning you can keep the plant in a good shape and size.

My first plant came from Manfred Westphall and has been growing in our garden for two years. Initially the plant was sparse in flower, starting to flower in late June, but within a few weeks this clematis had bushed out, helped by pruning of the growing tips, and gave a many-fold increase in its flowering potential which continued for at least four months until brought to an end by the first autumn frosts. 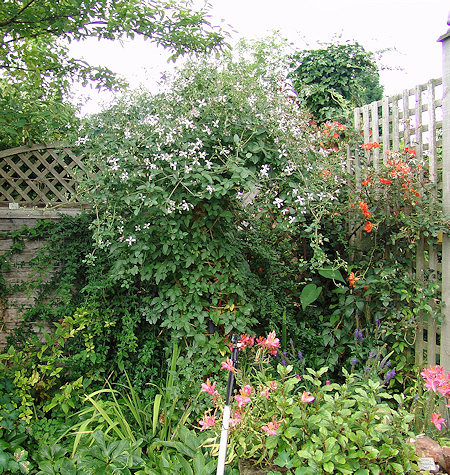 This year (2008) the plant has developed into a large specimen, growing to 3 metres tall, with many stems coming from below ground level, obviously helped by pruning to ground level in late winter followed by nipping out its growing tips in spring. This year its flowering period was restricted to June and July, mainly, I think, due to the lack of sunlight and heavy rains experienced in summer. In August we saw this plant covered in flowers on a visit to Sweden and thus it could be a candidate for the more northerly gardens.

The plant is very useful for trellis, fences and walls. If you place the plant in the surrounding of your terrace then you can smell very well the highly and pretty scented flowers. Clematis TRANQUILLITY™ can be combined with shrubs, roses and small trees.

During winter, keep the plant rather dry to make sure the plant survives to the next spring.

The plant belongs to group 3 for pruning and can be pruned in late winter or early spring, or even later in the season, depending on when spring arrives.