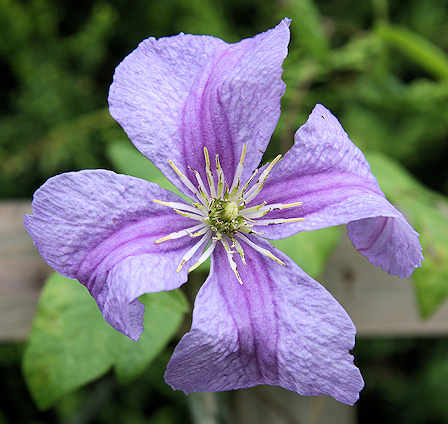 Clematis of the Month for August 2009

One of the best clematis in my garden right now is Clematis 'Emilia Plater', bred by Brother Stefan Franczak who died last month. This clematis is on the Society's Recommended Clematis list but has never appeared as the Clematis of the Month, so it is appropriate to feature it now in recognition of Brother Stefan's many achievements to the Clematis World.

The flowers of C. 'Emilia Plater' are described from pale blue to mid-blue through to blue/violette with a slightly darker central bar and veining. The flower colour can vary due to soil conditions, the weather and how the flowers appear against a background. Szczepan Marczyński recommends growing it amongst yellow-leaved or yellow-flowered plants. In my garden it is shown to advantage against a light green conifer hedge.

The flowers started blooming in my garden at the end of June and will last well into August are between 8-15 cm across with a white/green centre and there are generally 4 rounded tepals which curve under. The side of the tepal is often attractively wavy and catches the light in the sun. When the tepals die they tend to do so gracefully, falling off easily and cleanly. 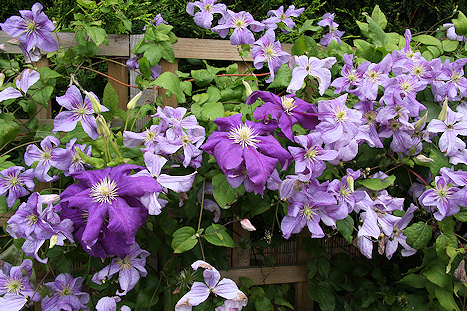 C. 'Emilia Plater' is a viticella type which is generally referred to as a late flowering clematis or Group 3 Clematis, which means that it should be pruned every year. So if you grow it with another plant you should make sure they can be pruned at the same time. You can give C. 'Emilia Plater' a first prune in autumn/winter, once it has finished flowering, and then again in the spring when it should be pruned down to 30cm (1 ft) or even less if you do not have many slugs in your garden. Pinching out the growing tips of the stems in spring can double the number of flowers that you receive later in summer.

This clematis is a very hardy and vigorous climber and in my garden covers a span of 2 metres (6 ft) across a couple of trellis panels, giving me a 2 metre span of flowers. With its viticella blood, it is not likely to succumb to wilt and should grow well in most conditions. In fact C. 'Emilia Plater' has a reputation of being a bit of a 'thug'! It looks good with other late blooming clematis such as pink and purple as you can see in the photo (right).

C. 'Emilia Plater' was raised by Brother Stefan Franczak in 1967 and was introduced in 1986. It was awarded a Certificate of Merit by the British Clematis Society in 2002 after it had been grown and assessed for 3 years. 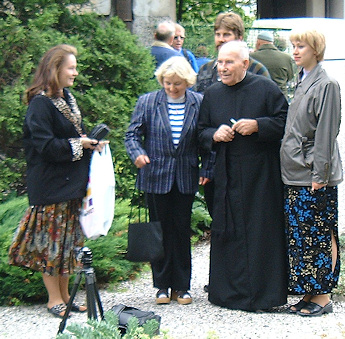 Brother Stefan Franczak with clematis friends from
Estonia during a visit by the Society to Poland in 2000.

Brother Stefan Franczak was born in 1917 in central southern Poland. In 1948, after a period in agricultural training, he decided to join the order of the Jesuits and to serve as a monk, rather than to become a priest.

At his monastery in Warsaw, Brother Stefan was given the task of tending the fruit and vegetable garden. Some time later the monastery authorities decided that the land should become a decorative garden open to the public and he looked after it. He created a garden containing over 900 varieties of flowers - mainly clematis, irises and hemerocallis.

Brother Stefan Franczak was an Honorary Member of this Society. His clematis have received numerous awards. The Clematis World is poorer for his passing, but he has left a wonderful and lasting legacy.

The Daily Telegraph, on it's website, published an interesting article about Brother Stefan and his clematis. You can read it at http://www.telegraph.co.uk/gardening/3312372/Climbing-towards-the-light.html. 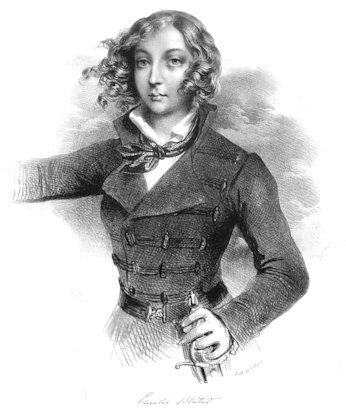 Brother Stefan named many of his varieties after Polish heroes and Emilia Plater is no exception. Emilia was born into the aristocracy in 1806 and as a young woman fought as an army Officer in the November Uprising (1830-1831), which was an armed rebellion against the rule of the Russian Empire in Poland and Lithuania. She was made the commanding officer of 1st company of the Polish 1st Lithuanian Infantry Regiment. She fought with distinction and was promoted to the rank of captain, the highest rank awarded to a woman at that time. Unfortunately, she fell ill and died in 1831. Emilia is considered a national hero in Poland, Belarus and Lithuania, which were former parts of the Polish-Lithuanian Commonwealth.