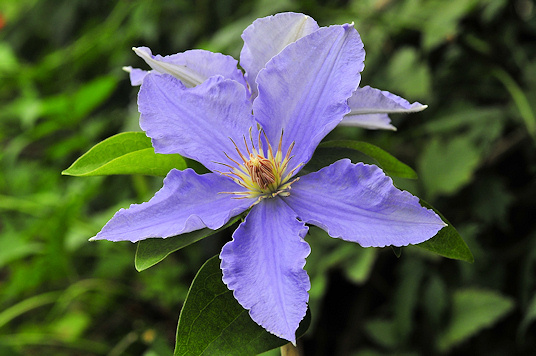 Clematis of the Month for October 2009 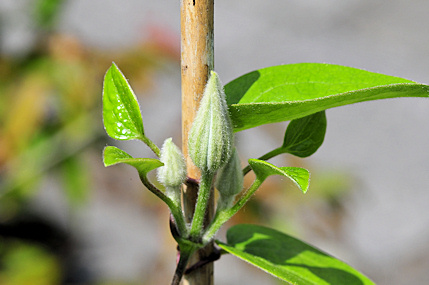 The flowers of Clematis lanuginosa are flat, from almost white to light blue in colour. The flowers are normally in 3-4 flowered dichasial cymes, terminal or from the upper axils, or sometimes solitary and 12-20(26)cm in diameter. 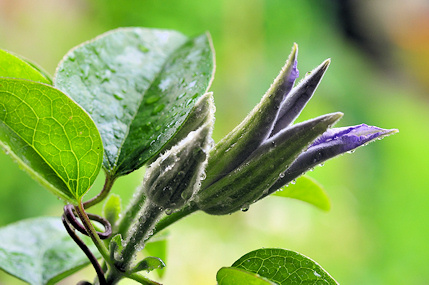 The flowers have 4-8 tepals which are 8-9 cm long, 7-8 cm wide. The buds are upright and more or less acute-ovate, densely silky downy. 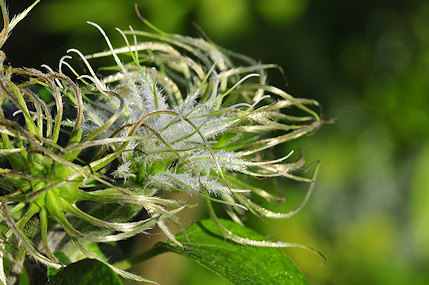 The fruit tales are 8-9 cm long and in a young state very hairy. 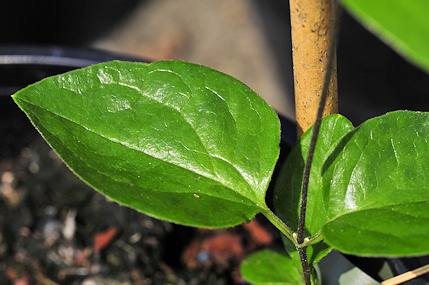 The leaves are ternate or simple, lower leaves on the stems usually simple and cordate, 6-12 cm long and 3-7.5 cm wide and papery. The leaves are almost cordate or ovate to ovate-lanceolate, tips cuspidate, entire, glabrous above, rather densely sericeous beneath. The stems grow to 1.5-2 meters and flower on current long shoots developed from the base.

The plant prefers acid, neutral and basic (alkaline) soils. It can grow in full sun or in semi-shade (light woodland). The hardiness of the plant is not known precisely.

This species had been used for a lot of interesting crosses. The most early crosses were C. 'Lawsoniana', C. 'Reginae' and C. 'Henryi'. One of the most famous crossings is C. 'Jackmanii' (C. viticella 'Atrorubens' × C. lanuginosa) and is still a very popular and beautiful plant. Familiar cultivars of C. lanuginosa are C. × durandi (C. integrifolia × C. lanuginosa), C. 'Mrs. Bush', C. 'Mrs. Hope', C. 'Sieboldia', C. 'Prins Hendrik', C. 'Nelly Moser' and many more.

The species C. lanuginosa disappeared around 1925 and has never been seen since this time. A lot of people have searched for the plant in nurseries and with enthusiasts but unfortunately the plant is no longer available. However the plant has been rediscovered in the wild by Yu Liangliang in 2008 and this is very interesting. We need new fresh blood to use with the large flowered hybrids because a lot of current ones are very sensitive to wilt. If we can make new and healthy large flowered hybrids/cultivars it will be very good for the popularity of clematis.

Now we have many more possibilities than in 1850-1920 and we must hope that this species becomes available to enthusiasts for making new hybrids/cultivars. But we must also keep the plant as a pure species.