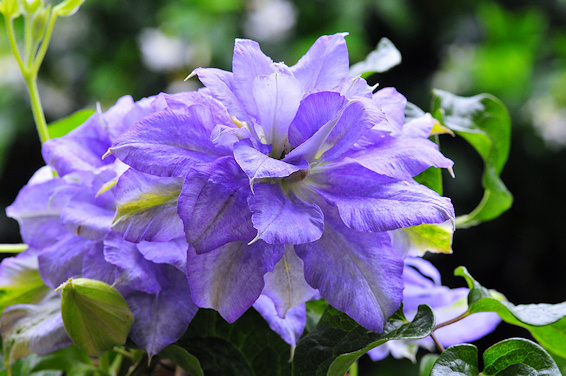 Clematis of the Month for September 2010

I have just visited Plantarium 2010 in Boskoop where I saw a special clematis from Poland. The flowers look very delicate, but Szczepan Marczyński told me that the plant has no problems in his garden, even after a lot of rain. The plants for Plantarium came from outside and not from the greenhouse and the flowers were very healthy. 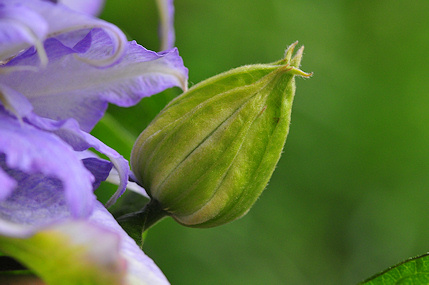 Clematis 'Mazury' is a Polish chance seedling raised by Szczepan Marczyński in 1994. It first flowered in 1996 and was registered in 2006 (see Clematis International 2007, page 27) . C. 'Mazury' was first published in Poland in 2006. It is named after the Masuria region in north-east Poland. 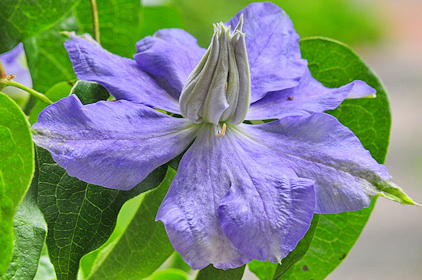 C. 'Mazury' grows up to 2-3 metres using twining leaf petioles to attach itself to the support materials. The flowers large - 15-17 cm in diameter - and are double. The colour is blue with lighter spots and the outer circle of the sepals is mottled with green. Flowers have a nice regular structure on opening, looking as though they are made of crêpe paper. When fully open they reveal creamy stamens. The > 50 sepals are ovate, pointed and margins wavy. 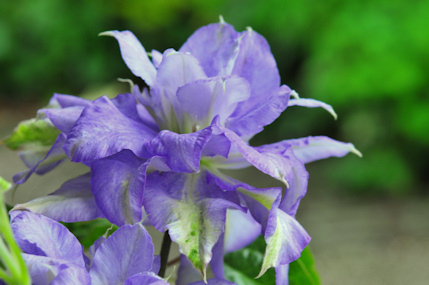 The flowers appear from the end of June to September on new growth. The plant grows well on a sunny or half-shaded position, where it will give the best colours.

The pruning group is 3 and therefore you need to prune the plant in late winter or early spring and even later in the season depending on when spring arrives. Hard pruning keeps the plant in a good condition, rich flowering and form. 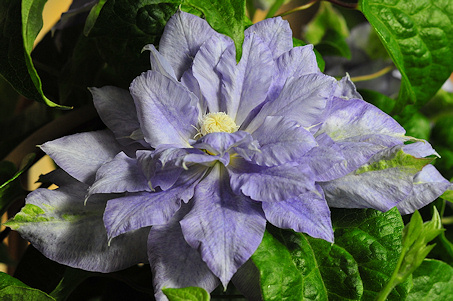 The special colour and form of the flowers of this clematis lend themselves to be used with other garden plants. For example, you can create beautiful combinations with light coloured roses, light flowering small shrubs and Clematis 'Mazury'. Because the flowers have such a special form the plant can be used in the border as well. In this situation the flowers will attract attention. The size of the plant is not too large and therefore the plant can also be used in a pot, placed against a wall, trellis or fence.

For good growing give the plant good soil and during spring and summer enough water and nutrition. During winter the plant needs a place in the garden where it is not too wet. If you keep the plant in a pot then the plant must be fed very well in summer and never let the soil dry out.