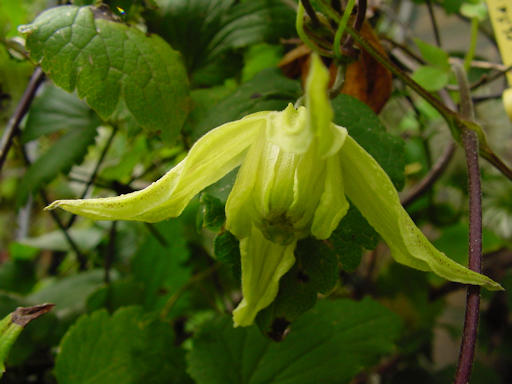 Clematis of the Month for October 2010 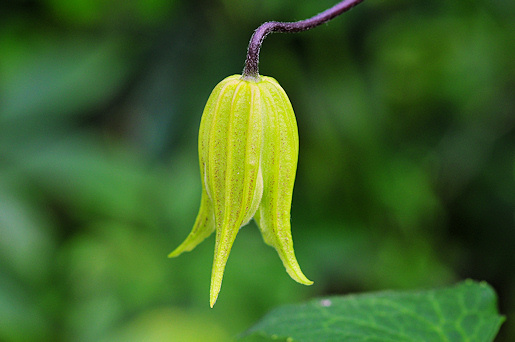 Scented nodding, yellow to pale lemon flowers, speckled red or purple. The flowers are somewhat larger than those of the species. C. chiisanensis 'Love Child' flowers on both old and new season's growth which results in its having a very long flowering season.

C. chiisanensis 'Love Child' grows up to 2.5 - 3 m with purple tinged stems. The flowers are 5-7 cm long and have 4 sepals. The color is light yellow and speckled with reddish brown blotches and spots. The top of the flowers is rather special because it is more flat. The flowers have spurs at their base which carry on down to the tip in the form of deep ridges.

The flowers appear from May through to September, on new shoots from the current year and on old wood from the previous season. This gives the plant a long flowering period. The plant grows well in a half-shaded position, giving the best colours under these conditions.

The pruning group is 1 but to keep the plant tidy, pruning must be done after the main flowering period. 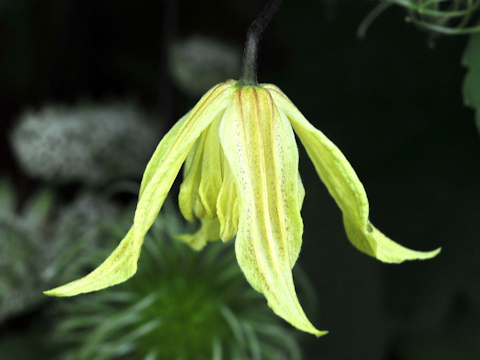 This Clematis grows the best in a border and therefore pruning is not needed. Combination in the garden with shrubs with light green foliage is best because although the flowers are light yellow, the stems are rather dark. The plant is also very useful in borders. It is not well suited for a wall, trellis or fence.

The plant tolerates most garden soils that contain some humus and have good drainage. During winter times the plant hates a wet place in the garden and it is almost certain that you will loose your plant under these wet conditions in the garden.

C. chiisanensis 'Love Child' is very useful for making crosses within the atragene group, giving different forms and colors to your seedlings.