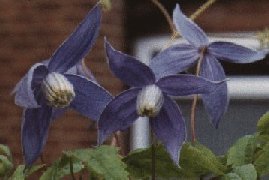 Clematis of the Month for March 1998

For many years gardeners have counted on two strong, rangy clematis, C. armandii and the several varieties of C. montana, to put on big shows with their thousands of flowers in the early Spring. The less flamboyant species that bloom at roughly the same season -- a group known formally as the Atragenes -- have never quite had their due from the public, though in recent years they have been gaining in visibility as garden writers learn more about them and appealing new forms appear in the trade. C. alpina is one of these Atragenes, C. macropetala another, and there are some others that should have a good day coming as interest in clematis continues to grow. It was not very long ago that a plant-lover shopping in a typical garden center for either C. alpina or C. macropetala would have had two choices: 'blue' and 'pink'. Now there are at least thirty named cultivars of each in a representative handful of English and European lists, and a dozen or more of these are available (if perhaps sporadically) worldwide.

C. alpina is native mainly to the European Alps, as its name suggests, and is among the hardiest of clematis. In virtually all the cultivated forms it grows to a height of 6' to 8'. It is quite properly called a climber, but in truth may prefer to ramble. Being fibrous-rooted, it does not demand as much root-space as we customarily give to the large-flowered hybrids, and since the entire plant is compact, it is well suited to limited space or even a container. For most gardeners the two distinctions of the species and its cultivars are the abundant Spring flowers and the subsequent seedheads that go through several stages from green-and-gold to feathery gray, and often stay on the vine for months.

The flower is a bell, usually nodding, with four tepals and an interior ring of petaloid staminodes (a characteristic mark of an Atragene). The bell can be quite different from one cultivar to another, not just in color but in attitude. The species proper has a flower of varying purplish-blue with cream-colored staminodes. There are several handsome blue cultivars; the one shown above was unfortunately not equipped with a label, but appears to be the venerable 'Pamela Jackman' -- mid-blue with a bluish tinge in the ring of staminodes. Other cultivars range from deep blue through lavender to pink, and even white, as in the 'Albiflora' of the photograph to your right. They differ also in the port of the flower. The bells of 'Albiflora,' for example, or the related North American C. columbiana, are softly drooping, almost limp, whereas those of 'Pamela Jackman' gradually open part-way and often turn upward. And there are other forms, such as the pale pink 'Willy,' which spreads its tepals wide and develops a winged look. It is no wonder that gardeners who plant one alpina are likely to want more.

A word about grooming. When the stems run out of overhead support they readily cling to each other, and with the added weight the new growth naturally bends earthward; so at clean-up time -- just after the Spring flowers have finished -- it may be advisable to tease apart some of the lower-lying strands and tuck them in higher up, or perhaps give the plant a taller support and tie them to it. Gardeners who belong to the honourable Order of Deadheaders may be tempted to do some of this remedial work in the very early Spring, if any leaves and seedheads are still hanging on and looking dejected, but they should proceed with caution, for the wood at this season is extremely brittle, and they could easily break off the very stems they are trying to preserve. The same caution applies, by the way, to macropetalas.