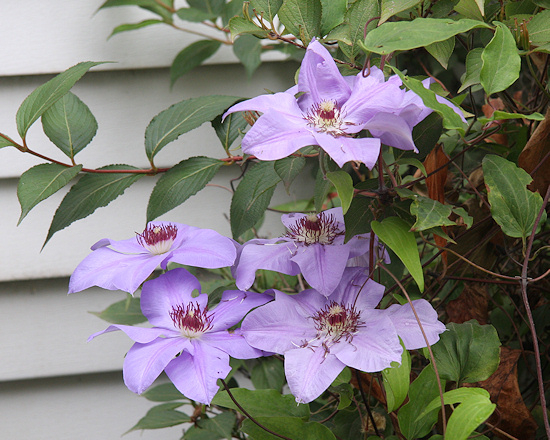 Clematis of the Month for January 2011

When planning was underway for the International Clematis Society's first visit to the Rogerson Clematis Collection in July of 2001, Brewster Rogerson realized with alarm that he did not have Clematis 'Ramona', so he quickly purchased a plant from a local source. Happily, this same plant is pictured above, blooming for the second visit of the I.Cl.S. on September 11, 2010. It has obligingly decorated this Weigela 'Bristol Ruby' since the autumn of 2006.

C. 'Ramona' is a cultivar steeped in mystery. Is it the same plant as 'Hybrida Sieboldii', bred in Boskoop in 1874; is it an American creation from 1888; or a seedling originating with Lemoine in France, sent on to Holland, and named in the USA? For gardeners, the mystery does not stop with its ancestry, but extends also to its cultivation. In most sources it is listed as a late large-flowered hybrid (pruning group C), but in fact, the plant can just as easily be treated as a lightly groomed early bloomer (pruning group B). At the Rogerson Clematis Collection, the C. 'Ramona' in the weigela is dead-headed but rarely hard-pruned. The result is that C. 'Ramona' blooms with the weigela in late May, flowers again in July, and finishes the growing season with a flourish in September. The only long stems of the clematis that get cut back are those involved with wayward new growth on the host shrub.

Any method of pruning will benefit the garden with flowers composed of 6 to 8 sepals, 12 to 18 cm in diameter. Timing of pruning does not effect the size of the flowers. The color is variously described as pale lavender-blue, sky blue, or intense blue, but medium lavender-blue with red stamens is what is usually produced. The vines reach 2.5 to 5 m in height, and C. 'Ramona' is tolerant of a variety of light exposures. It is not a great choice for containers, as the plant tends to want to fling itself in several directions of lanky growth, and doesn't make a pleasing bushy mass even with repeated tip-pruning. The leaves are simple and usually ternate. The developing flower buds reflect the assumed parentage heavily influenced by Clematis lanuginosa, with a fuzzy quality pronounced along the seams, and a twist at the bud point. The resemblance with C. 'W. E. Gladstone' is noticeable, but the flowers of C. 'Ramona' never reach such similarly wide diameters, nor do the leaves of C. 'Ramona' reach the size of the foliage on C. 'W. E. Gladstone'.

No matter what the heritage, the plant we have all agreed to call C. 'Ramona' is an excellent garden clematis, beautiful and adaptable and guaranteed to perform when guests are due to arrive.