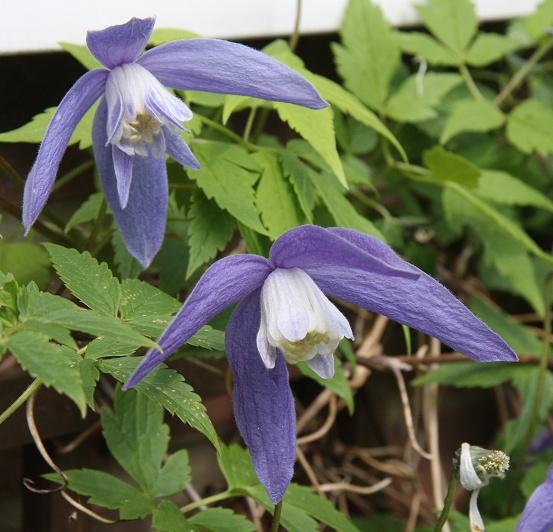 Clematis of the Month for February 2011

This is a lovely little early spring clematis which in my garden, just north of London, is usually the first alpina to flower in March and is a welcome sight as it means that Spring is well on its way.

The flower colour is a good mid-blue with a little mauve which catches the light and sparkles in the sun as the flowers are held out from the plant and nod in the breeze. The outer tepals are 5 cm (2 inches) long and quite broad.

The main attraction of C. 'Frankie' is that the inner white "skirt" has some blue on the edges. On the plant that I've had for a number of years the amount of blue appears to be variable. On some flowers the blue is very delicate and is a dainty edging - giving an impression of a scalloped edge to the "skirt". However, my plant often has flowers with a lot of blue at the edges as you can see on the top flower in the photo above.

C. 'Frankie' has been available to gardeners for 20 years as it was raised around 1990 by Frank Meecham who lived in Lincolnshire, England and was introduced by Raymond Evison in 1991. It was awarded an AGM (Award of Garden Merit) in 2002 by the RHS and also features in RHS Plant Trials Bulletin Number 21 May 2008, available via the RHS website.

Generally Clematis alpinas grows well in most soils. However, light sandy soils will need compost adding to increase the moisture and clay soils will need something added to make the soil lighter or more free draining if possible. Alpinas grow in the wild on mountain slopes so they are used to the cold and water running past their roots. On clay I've found that where I've not improved the soil the plant takes a year or two longer to get established and flower well but it will do so. 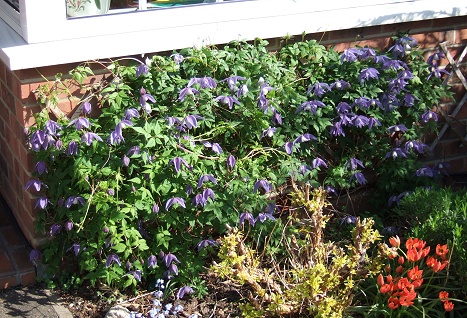 Clematis alpinas are generally found in the undergrowth so prefer some shade but my C. 'Frankie' lives on a low south facing wall at the front of my house. I've positioned a few shrubs to provide some shade for the roots in the summer. The plant grows about 3 meters (10 feet) and is suitable for zones 3-9.

Alpinas are suitable to grow in pots but they are so tough that I would always put them in the ground and save the pot for a more tender plant!

You can see pictures of Clematis alpina growing in the wild on our Previous Events pages, Switzerland 2009 Part 2 and Poland 2002 Part 1.