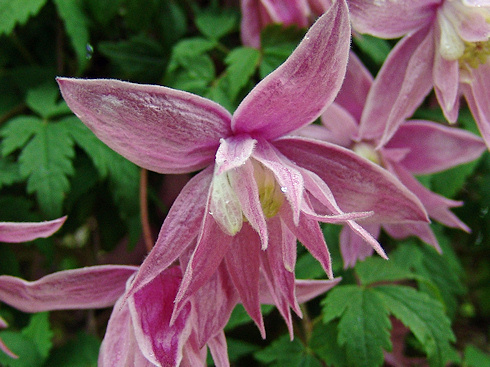 Clematis of the Month for March 2011 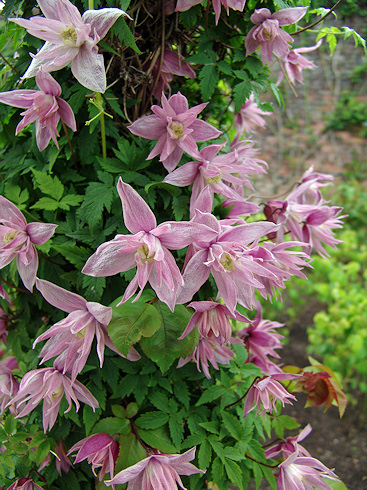 In his book "Clematis" (1935), Ernest Markham, the previous head gardener at Gravetye Manor, lists C. macropetala var. marlhamii, I quote "This beautiful variety, raised by me, bears clear pink flowers and requires the same treatment as the species. It received the RHS Award of Merit (AM) on March 5th, 1935". This is the cultivar now known as C. 'Markham's Pink'. I am not sure when its name was changed, but Jackman's Planters Handbook of 1951/2 lists it for sale as C. 'Markham's Pink', priced 8 shillings (about half a Euro, or a Dollar). It was subsequently awarded the RHS Award of Garden Merit (AGM) in 1993, although there is an entry in the RHS Trials Bulletin No. 21 dated May 2008, where it is recommended to be rescinded at the AGM review in 2012. This would be a shame in some respects as I believe that C. 'Constance' is the only pink Atragene that surpasses it for flower power and ease of growth at the moment.

This plant grows to about 2 to 3 metres, but may easily double this size in ideal conditions if left un-pruned. The flowering period is late March to April, so can be pruned after it has finished flowering to keep the plant within bounds. It is a useful plant to grow in a North facing aspect as it can thrive in a certain amount of shade, in fact in warmer areas this may well be the most suitable aspect for this plant. 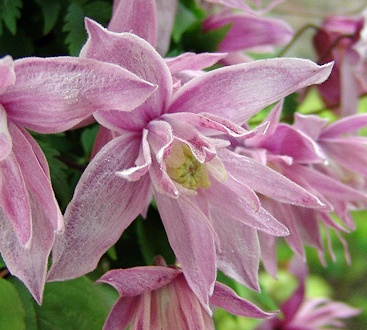 I have grown this plant in three gardens on different soils in Cambridgeshire, from clay, through black fen sedge peat (acid) to the chalky (very alkaline) based soil of our present garden but have to admit the fen soil produced the most vigorous and free flowering plant. It also did quite well on the clay soil but the soil had been modified with tons of sand/gravel and well-rotted horse manure before it was considered suitable for growing any type of plant. The main reason that I no longer grow this plant is that, although it produces a mass of flowers in the spring, it is reluctant to repeat flower after its main flowering and I feel it is gradually being surpassed by some of the koreana × macropetala hybrids that exhibit this trait. But it is still one of the best clear pink macropetala's. 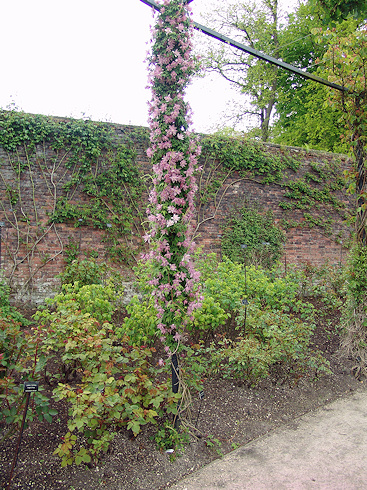 I could not find any early pictures of C. 'Markham's Pink' growing in any of our gardens but have some pictures taken at Alnwick Castle Gardens, in North East England, last year (2010), which shows the flower power that can be achieved with this plant.