Clematis of the Month for June 2011 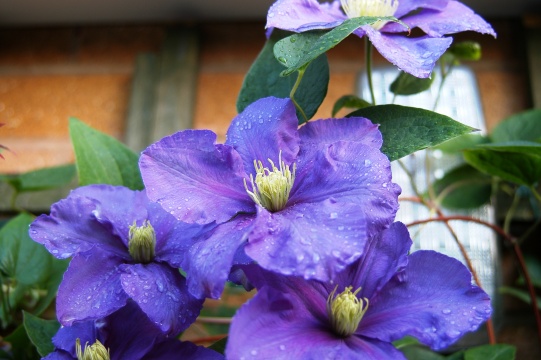 We purchased C. 'Generał Sikorski' in the 1990's and planted it in a pot against the garage wall. This is a sheltered east facing aspect which provides semi-shade to the plants grown there. Here the plant grew and flourished producing an abundance of beautiful large mid-mauve blue flowers that had a faint red bar from early June onward. Sometimes it produced a second flush of smaller flowers in August-September. It seemed well suited to this position.

I was so impressed with the plant that it became one that I'd recommend to people as suitable for growing in semi-shade as I believed it helped the flowers keep their beautiful colour much longer.

After approximately four years we thought the plant would benefit from being planted in the ground. This required the removal of a concrete slab at the base of the wall to enable us to retain the planting position. The plant flourished and grew even better and visitors remarked upon the amount of flowers it produced.

Unfortunately, one year it just did not appear and that was the end of our lovely plant. We can only hazard a guess as to the reason it died but for whatever reason it was a plant that was sadly missed.

The History of C. 'Generał Sikorski' by Fiona Woolfenden

Brother Stefan Franczak, the famous Polish Clematis breeder, raised in 1965 a very similar clematis which he called C. 'Jadwiga Teresa', named after his assistant gardener (Jadwiga Teresa), which was introduced commercially in 1975 and registered in 1987.

According to Brother Stefan he sent C. 'Jadwiga Teresa' to Noll who renamed it C. 'Generał Sikorski' and then introduced it. Brother Stefan was annoyed and wrote to Victoria Matthews, the International Clematis Registrar at the time, to say that that he had grown several plants of both cultivars and that they were all identical.

As C. 'Jadwiga Teresa' is the earlier name then strictly speaking this is what it should be called. However C. 'Generał Sikorski' is the name that most plant enthusiasts know it by and therefore this is the name that is used.

We do not know why Władisław Noll renamed this clematis. Generally Brother Stefan named his clematis cultivars by reference to the church or to Polish history so perhaps Noll thought that naming the clematis after C. 'Generał Sikorski' was more in Brother Stefan's usual tradition than naming it after his assistant gardener. 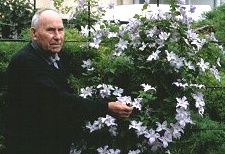 Brother Stefan Franczak bred and introduced a great many clematis. Victoria Matthews, writing in Clematis International 2003, provided an analysis from the International Clematis Register and reported that he was the fifth most prolific breeder of clematis with 66 entries in the Register. Brother Stefan was a gentle and very modest man; a number of Members of this Society had the pleasure of meeting him in the garden of the Jesuit College where he lived for the majority of his life during visits to Poland in 2000 and again in 2002. Brother Stefan bred some outstanding clematis, included C. 'Polish Spirit', C. 'Westerplatte', C. 'Błękitny Anioł' (Blue Angel), C. 'Jan Paweł II' and one of my favourites, C. 'Emilia Plater'.

So who was General Sikorski?

Władysław Sikorski was born in Poland in 1881 and became a soldier. At the outbreak of the First World War he joined the underground movement for Polish freedom. He served under Józef Piłsudski fighting for Poland's freedom.

In 1921 Sikorski replaced Piłsudski as Commander-in-Chief and the following year was elected premier. Sikorski obtained recognition of Poland's Eastern frontiers by Britain, France and the United States.

After Józef Piłsudski staged a military coup in May 1926, Sikorski retired to Paris. Sikorski returned to Poland in 1938 but was refused a command when Poland was invaded by the German Army in September 1939. He escaped to London where he helped establish a Polish government in exile during the Second Word War.

Wadysław Sikorski was killed in an air crash over Gibraltar in July, 1943, some thought in suspicious circumstances.

More details about General Sikorski can be found at: http://www.spartacus.schoolnet.co.uk/POLsikorski.htm.