Clematis of the Month for July 2011 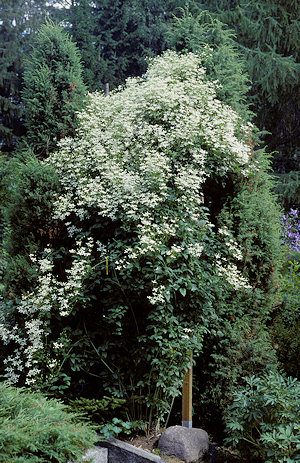 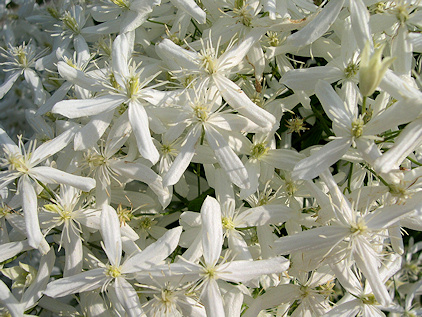 Referred to in the Flora of China Volume 6 as Clematis terniflora var. mandshurica but now more commonly known as C. mandshurica this plant growing on dry slopes of shrubby areas and forest margins from 200-800m in Heilongjiang, Jilin, Liaoning, Nei Mongol districts of North East China, also North Korea, Mongolia and Russia (Siberia). Although in the area of the Amur river, bordering Russia and North Eastern China it was observed growing on flat sandy shore-side meadows with C. fusca. The first reference to this plant was by F. J. Ruprect, in 1857.

C. mandshurica has been placed in the Section Flammula (Magnus Johnson). Plants associated with this section are located in two areas, namely; Europe, the Mediterranean regions including North Africa, Eastern Europe, the Caucasus and the Asian area covering India, China, Nepal, part of Mongolia, Russia, Japan and Korea. The section consists of 32 species with four growing in the European region and the rest growing in Asia. 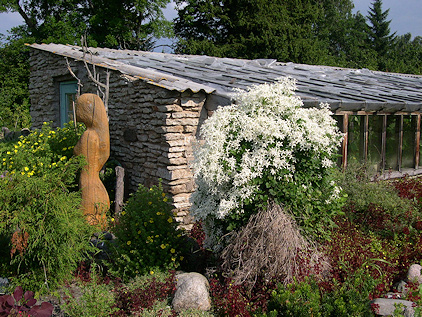 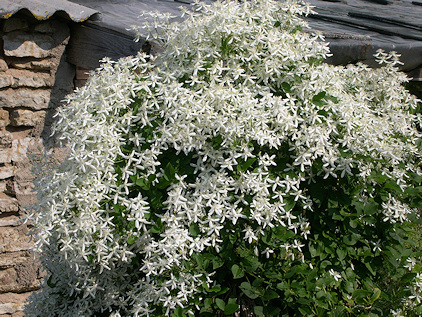 I have grown C. mandshurica in our garden in Cambridge for at least 10 years, the plants originating from either wild collections or garden seed. Most of the resultant plants, although easy to germinate and leading to healthy plants, gave results which were disappointing, leading to either poor flowering, small flowers, together with, no scent at all or a distinctly horrid aroma. Having seen plants covered in flowers, with a wonderful scent growing in gardens in Estonia, Finland and Northern Germany, it is worthwhile seeking out a really good clone. Also it is possible that the plant is more suited to a cooler climate and longer summer day length that is available in these Baltic regions.

Thanks is given to Werner Stastny for images of plants growing in the Baltic region.

Note. A question has been asked as to the correct spelling for this Clematis. The three spellings I have seen are C. mandschurica, C. mandchurica and lastly C. mandshurica, which I have used, this being the spelling used by Magnus Johnson and also in "The Flora of China". This spelling is widely used on the internet with reference the Manchurian Clematis (maybe it should be C. manchurica)?

[Editor's note: I raised the question of spelling with Duncan Donald, International Clematis Registrar and he has confirmed that C. mandshurica is indeed the correct form. Duncan will raise an amendment to "The International Clematis Register and Checklist 2002" (where it is currently shown as C. mandschurica) in the next supplement, on which he is about to start work (July 2011). I thank Duncan for resolving this issue.]