Clematis of the Month for September 2011 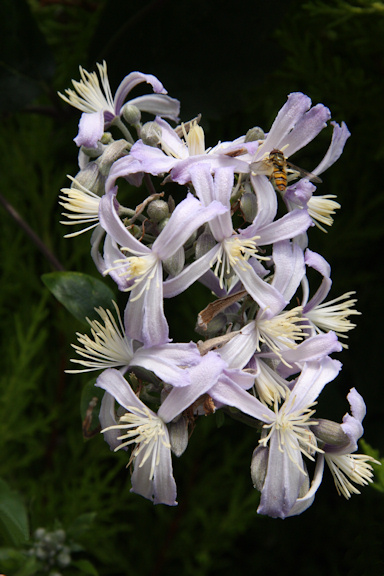 I first saw Clematis 'Praecox' in 1990 at Nymans, a National Trust house and gardens near Haywards Heath in West Sussex, Great Britain. The plant was covering a large unattractive object in the garden and I thought that the way it was being grown as ground cover was such a good idea. Then I realized to my surprise that it was a clematis. This was one of the first non-climbing clematis that I had seen. 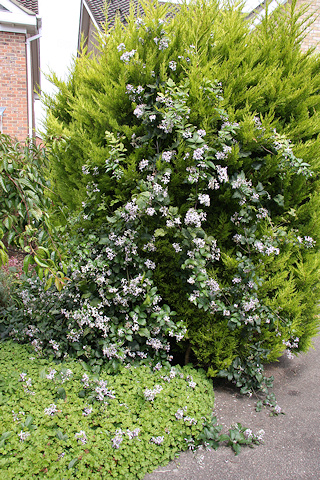 Since then I have grown it in a number of gardens in various different positions, all with good results. In my current garden it grows at the front of the house, in a south facing position, reaching up 2 metres (6 feet) into my neighbour's conifer hedge and spilling down on the outside with clusters of small flowers along its stems. Next to the conifers it happily competes with them; I give it a few bucketfuls of water in the spring to get it going and again if we have a very dry spell but otherwise once it starts growing it does not appear to need additional water - although it has had a lot of extra water this year due to our very rainy August. The site is in full sun and it only receives a little shade from the conifers at its roots. 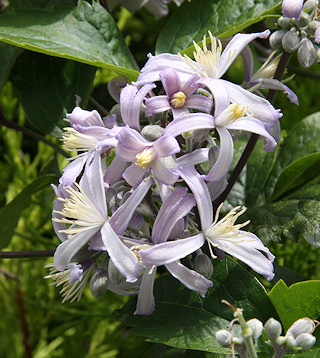 The small flowers start as light blue buds about 1 cm long which are almost nondescript. Then the flowers start to open into slightly longer tubes and then they open wide into a cross or star shape 4 cm wide getting whiter and more noticeable as they do so. A cluster will have buds, opening flowers and fully open flowers all at the same time. My plant is in full flower and has been flowering now for several months; as one cluster of flowers finishes the plant grows another cluster at the end of the stems.

Previously I grew C. 'Praecox' in a dark corner of our patio where it flourished happily and flowered very well but with fewer flowers than where the current plant is. I think that the flowers in shade were a darker blue but they still stood out as light blue and lit up a dark corner. So this clematis is a plant for sun or shade but better in sun and tolerant of dry soil. 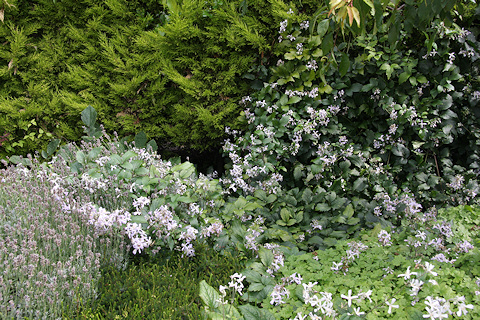 It is not a climber but a scrambler so it either sprawls over or grows through other plants with open structures. It is quite a heavy plant with thick stems and large leaves so if you grow it over other plants then the plants underneath need to be robust to survive. In the photos you can see as well as growing up into my neighbour's conifers it sprawls over a row of lavender and heather and crawls amongst some herbaceous geraniums.

You should prune your C. 'Praecox' in the spring down to about 30 cms (1 foot). I usually get rid of the long stems before Christmas to tidy the plant and then prune it again in spring as the buds start to break.

C. 'Praecox' has an RHS Award of Garden Merit and is categorized as part of the Heracleifolia Group of clematis and is thought to be a cross between C. × jouiniana and C. tubulosa. A similar clematis which I also grow is C. 'Mrs Robert Brydon' which has paler flowers with not so much blue. Both C. × jouiniana and C. 'Mrs Robert Brydon' have already featured as Clematis of the Month for November 1997 and October 2000 respectively.